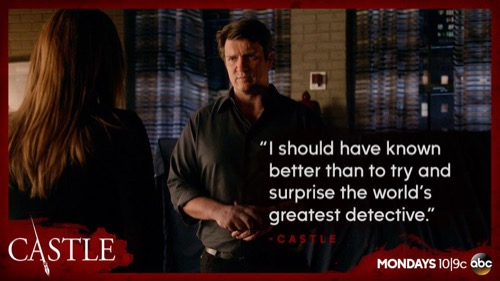 Tonight on ABC Castle starring Nathan Fillion continues with an all new Monday April 25, season 8 episode 19 called “Dead Again” and we have your weekly recap below. On tonight’s episode a city inspector cheats death twice when he survives separate poisoning attempts.

On the last episode Hayley helped an old pal, but this favor got her in trouble, linking her to a murder and a cyber-terror attack. She then needed help herself, so Castle and Beckett attempted to clear her name. Did you watch the last episode? If you missed it, we have a full and detailed recap right here for you.

On tonight’s episode as per ABC’s synopsis, “a city inspector cheats death twice when he survives separate poisoning attempts, and a curious Castle and Beckett grow determined to solve this mysterious case.”

Tonight’s episode is going to be great so be sure to tune in to CASTLE on ABC at 10PM EST. We’ll be blogging all the action, be sure to hit up the comments and tell us how excited you are for season 8 episode 19.

Alan Masters was either the luckiest man on earth or he was the first immortal that Castle had ever come across on tonight’s all new episode of “Castle”.

Apparently there was such a thing as dying more than once and that’s exactly what happened to Alan Master. Alan who was once considered to be completely boring and who didn’t have a love life much less any kind of social life outside his job as a Safety Inspector for the city had first been poisoned, then electrocuted, and finally shot at point blank range yet he survived it all. And so Castle wanted to make him into some kind of superhero.

Though Alan didn’t particular care about being a superhero. He just wanted to return to his normal if not boring life and he would have if someone hadn’t kept trying to kill him.

The first time that Alan Masters had died, he had been on the phone with customer service and was just trying to get someone in to fix one of his channels that kept blinking out when the person on the other end of the line had overheard him choking to death. And he did die from that. The police had been called and Lanie had also been quick onto the scene. Yet, everyone concurred that Alan was dead and they were second away from transporting him to Lanie’s office when he suddenly popped up and asked what was going on.

So naturally everyone had later said it was a miracle. Alan had survived what looked like a poisoning and a follow up test proved that someone had tampered with his water filter in order to drug him with the a deadly neurotoxin. However, in spite of his miraculously recovery, all Alan wanted to do was to go home and hopefully got to work the next day. And so Castle had tried to tell the man he nicknamed as Lazarus that he should get out there and live, but Alan was doing his best to ignore the other man when he ended up dying for the second time.

Alan had gone into his room and he was simply to lay down on his bed for a bit when he was thrown across the room because someone had rigged his bed to electorate him. So Lanie was called back to Alan’s apartment for the second time and she had pronounced him dead again. And for the second time, Alan got back up on his own two feet after she had done so and that time he asked where was the barbeque. For it seems he had been smelling some of his own burnt flesh.

But Castle just had to get excited about Alan surviving death twice within twenty-four hours and therefore he was the first one to bring up the possibility of Alan being immortal. So while the others could have ignored him, Lanie for the probably the first time ever had decided to side with Castle on this one. She too wanted to know if Alan was immortal and she ran several tests on him to determine how he survived both situations.

And, in the meantime, the others investigated who would want Alan dead. Alan used to have an assistant and he had fired said assistant not that long ago. So Ryan and Esposito did check out Dave and they thought he made a good suspect what with his infamous anger issues. Yet, Dave had an alibi and it was pretty solid one. He was at home with the mother-in-law he hates and whose life he threatened right in front of the detectives.

So there was really not doubting Dave’s story however the detectives then had to ask Alan about his work and whether or not he had run into some issues. Which got him to thinking and made him admit that he had recently shut down a lab because they had a nasty chemical spill. Though that last part excited Castle who felt the chemical spill must have something to do with Alan’s origins story. That is something, apparently, every superhero has and why Castle wanted to know what kind of chemicals were spilled because he thought he should be the one to right the origins story.

Yet, there wasn’t anything radioactive in the chemicals and so that ruled most stories that Castle was using as a basis to figure out Alan’s superpower. And it seems the only thing that Castle could warp into an origins story was that the biopharmaceutical company were basically working on something that would stimulate hair cells. So Castle thought maybe the drug they were coming up with was also able to regenerate other cells as well. And he later asked Alan to stay at his apartment (Alan couldn’t exactly go home because someone was trying to kill him) until they knew he was safe and once they figured out what his superpower was.

And the only way he was able to convince Alan to do that was by dangling what he found out about Gwen. Gwen had worked at the same company that had their recent spill and it turns out she has noticed Alan even though he didn’t that she had and she had thought he was funny. So Castle ended up playing matchmaker for these two. Once he got Alan to do stay at his place, he told him that Gwen had asked about him because she appeared to be worried and Alan the courage to finally take the plunge with her.

So he finally asked out Gwen.

Only the date proved to be a bust. Alan had tried to impress her by telling her he was a superhero and so he wasn’t doing so well on his own, but the real kick up happened when the two were interrupted by both Castle and a man named Horatio Spate. Spate was the new owner of a waste management company and so Castle thought he had been the one trying to kill Alan because Alan had a reputation of always doing things by the rules (which organized crime doesn’t actually appreciate). Although Spate hadn’t stopped by to threaten Alan, he had simply wanted to make the other man an offer.

Spate had apparently wanted to offer Alan some protection while there’s someone out there wanting to kill the safety inspector. He said that his people could protect Alan from certain ramifications and, after Alan turned him down, he even offered Alan some of his new pills that supposed to help him keep a clear head if not make better decisions in the future. However, those pills and the logo on them proved that Spate had a connection with an herbalist that had just bought up a lot of TTX. TTX being an approved substance in a lot of eastern medicine.

But that same herbalist had connections with the Triad. So the guys were trying to figure out what could bring the Triad and Spate together when they’re known to be enemies and they guessed their best bet would be to check out this herbalist. Only the detectives were denied their warrant so Castle and Alan came up with an alternative. They figured they could get inside of the Lucky Dragon as part of a surprise safety inspection and thankfully they brought backup. Esposito and Ryan had been waiting out in the alley so they were in position to catch some guys at the Lucky Dragon moving merchandise while front person was trying to bamboozle Castle and Alan.

So Lanie tested the chemical the store was trying to hide from the safety inspection and she found out that it was synthetic heroin. Meaning it could be made in a lab and no one would have to ship it or risk alerting the police to what they were doing. Though the main ingredient in the synthetic heroin was familiar to Alan who had seen in back at the same lab Gwen worked in. And unfortunately that was not a coincidence.

When Alan ran to the lab in order to warn Gwen (admittedly without backup) about her workplace being unsafe, she pulled a gun out and shot him at point blank range. But, again, Alan survived and the police eventually caught up to Gwen before she could kill her coconspirators. So the police had everything they needed to arrest her and so the own downfall had been the fact that Alan wanted nothing to do with Castle. Who was more sold than ever that Alan was immortal and had been trying to sell Alan on the idea of accepting him as a mentor in crime fighting.

However, there were other tidings on tonight’s episode. Beckett and Castle lost Vikram who decided to run rather than face LOKSAT. And just as they lost Vikram, they gained Caleb Brown who suddenly wanted to help them uncover everything.