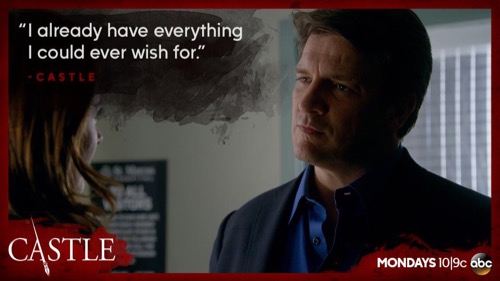 Tonight on ABC Castle starring Nathan Fillion continues with an all new Monday April 18, season 8 episode 18 called “Backstabber” and we have your weekly recap below. On tonight’s episode Hayley (Toks Olagundoye) helps an old pal, but this favor gets her in trouble, linking her to a murder and a cyber-terror attack.

On the last episode the murder of a man connected to smuggling Turkish relics sent Castle, Beckett and the 12th Precinct on a search for a stolen antique believed to be Aladdin’s lamp, in the hopes that it could lead them to the killer. Did you watch the last episode? If you missed it, we have a full and detailed recap right here for you.

On tonight’s episode as per ABC’s synopsis, “Hayley helps an old pal, but this favor gets her in trouble, linking her to a murder and a cyber-terror attack. She then needs help herself, so Castle and Beckett attempt to clear her name.”

Tonight’s episode is going to be great so be sure to tune in to CASTLE on ABC at 10PM EST. We’ll be blogging all the action, be sure to hit up the comments and tell us how excited you are for season 8 episode 18. While you wait for the recap, check out a sneak peek of tonight’s episode below!

Tonight’s episode of Castle kicks off with Haley hopping in a car with her boss Bryce, he introduces her to a guy in the car named Marcus and says that arcus will be going on her assignment with her. Bryce says that they have been hired by the Vice President Of Manchester Energy International’s wife – she is convinced her husband is cheating on her and has hired Bryce and his tea to find proof.

Bryce explains to Haley that she and Marcus have to go in to Manchester Energy’s headquarters. Marcus is going to get her through security, then it is Haley’s job to put spyware on the Presiden, Paul Haulston’s, computer. They head inside and get to work. The spyware is taking forever to upload, while they are waiting a guy heads in to his office with a random bimbo. Marcus and Haley hide under the desk while they are hooking up. Haley leaves the office, but Marcus wants to stay and watch the couple hook up. The next day, the maid service finds Marcus’ dead body lying under the desk.

It’s morning at Castle’s house – Beckett had a dream that Castle betrayed him, and she is pretty upset about it. Luckily, her phone goes off. Castle jokes that he was just saved by a murder. Meanwhile, at Castle’s office – his mom is showing Haley and Alexis her new autograph that she is putting in her books. Castle arrives and says there was a murder at Manchester Energy, which obviously peaks Haley’s interest since she was there last night, she tells Castle she wants to tag along and “see him in action.”

Castle and Haley arrive at the crime scene, Esposito and Ryan give him a hard time about needing Haley’s help. Lanie shows them Marcus’ body – he was stabbed in the back and murdered. Marcus’ watch is broken, which means that he was killed at 3:27 AM. Javi thinks that Marcus was a burglar and he broke in to the office building to steal computers.

When no one is looking, Haley calls her boss Bryce and tells him that Marcus is dead. Bryce confesses that he lied about everything and there is no cheating husband. He tells Haley “Code 44” and hangs up on her. Haley rushes to her apartment – apparently “Code 44” means get the hell out of dodge. She pulls up a secret floorboard and gets out her passport and a gun. Alexis walks in and Haley throws her on the floor and pulls her gun on her.

Haley apologizes and tells Alexis that she needs to get out. Alexis refuses to leave and demands to know what is going on. Haley confesses she did a job for an old friend last night, but she just found out that the job wasn’t legit, and he told her to abandon everything and run for her life and don’t look back (apparently that is what Code 44 means). Alexis won’t let Haley leave – she says that she has people there that care about her, and she needs to figure out what is going on and fix it.

Back at the police station Esposito and Ryan are teasing Castle about Kate’s dream, but they won’t tell him what it was about. Ned Werner is brought in for questioning – he was the guy that Haley and Marcus saw hooking up with a woman in the office in the middle of the night. Ned confesses that he was there – but insists that he never saw Marcus. Ned has an alibi – he got picked up by a cab at 3:19.

Castle and Kate can tell that Haley is acting strange. She finally confesses to them that she was in the office last night with Marcus. Kate drags her in to the interrogation room and Haley fills her in on everything that happened – including her old boss Bryce. Haley takes the cops to Bryce’s house so that they can question him. When they arrive they hear a gun shot and run inside – Bryce is dead.

Haley is convinced that Karla is the killer – and she was working with Marcus and Bryce. While they are at the murder scene, Haley gets a message on her phone – someone just wired her $10 Million from an unknown account. The news comes on – Manchester Energy was the victim of a cyber attack and someone hacked their computers and shut down all of the power in London. Castle puts two and two together and realizes that Haley is the patsy, she is being framed to take the fall.

Castle gets a phone call from Esposito, he and Ryan found Karla, her real name is Beth Wynne and they are headed to her hotel to arrest her. Haley and Castle rush to the hotel just in time to see Ryan arresting Karla/Beth for Bryce and Marcus’s murders. Beth insists that she is innocent, she confirms that she helped Haley upload the virus while she was at the office with Ned. According to Beth, she and Marcus were hired by a guy named Edgar Patton, and he insisted that Haley was a part of the job – he wanted he to be blamed for it.

Haley is determined to figure out who Edgar is – she takes Beth’s computer back to Castle’s office so that she can try to figure out who created the virus that she uploaded in to Manchester Energy’s computer. Haley tells Alexis that she recognizes the security code in the software – she helped design it years ago. Then, Alexis turns her back and Haley runs out the door.

Meanwhile back at the precinct, Beckett does some investigating of her own and finds out that Edgar Patton is actually Haley’s old m16 parter Wesley. Wesley was supposed to be killed in Iraq 6 years ago, but apparently he is very much alive.

Haley runs to an abandoned building and calls out for Wesley – she tells him to come out of hiding. Wesley emerges from the shadows, all smiles, he tells Haley that their plan worked! Haley is obviously a bit confused.

Castle and Becett bring in Mallory and demand to know what is going on. Mallory confirms that Haley and Wesley created the computer virus that crashed the London power grid was one that Haley and Wesley used in Iran years ago. During the mission, Wesley was killed. Mallory says that Wesley and Haley were thick as thieves, and he thinks that they joined forces now to get back at M16 for letting Wesley get killed – even though he didn’t actually die.

Meanwhile, Haley is confused and trying to talk sense in to crazy Wesley. He says this was their plan all along, and they can retire together now. Wesley says that Bryce had it coming – he left him for dead in Iran. He confesses to killing him and Marcus. Haley tries to arrest Marcus – but he fights her off and knocks her out.

Haley wakes up and realizes that she is tied up and hanging from her arms in the middle of the warehouse. Wesley takes out a knife and promises he won’t torture her, he’ll make her death quick, because they used to be friends.

Mallory finally confesses that he thinks that he may know where Haley and Wesley are – they had a rendezvous point in the city. Castle and Kate arrive in the knick of time, before Wesley cuts Haley’s throat. Wesley makes a run for it, Castle unties Haley and she chases after Wesley. She finds him trying to sneak out of a secret tunnel and pulls her gun on him. Wesley has a knife and he refuses to drop it. He lunges at her with the knife and Haley has no choice but to shoot and kill her former partner. Castle sees the entire thing happen and rushes to Haley’s side, he reassures her that it is not her fault, she didn’t have any other options – it was either her life or his.

Kate helps clean up Haley’s mess with the FBI and gets her name cleared. Kate goes out to drink with Ryan and Esposito to celebrate. Meanwhile, Haley and Castle celebrate with drinks at his office with Alexis. Agent Mallory stops by and offers Haley a spot back on the force, she tells him to “piss off.”

Later that night, Kate heads home and Castle is waiting for her. He gives her a red rose, and apologizes for her bad dreams about him. Castle promises Kate that he hasn’t been keeping any secrets from her lately – except for one thing. Castle presents Kate with a gift he has been working on for her, he got her Dad’s motorcycle completely restored for her. He wants Kate to go on a cross-country trip with him on their motorcycles. They head to the bedroom to celebrate.