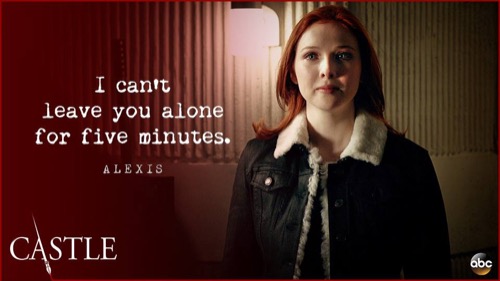 Tonight on ABC Castle starring Nathan Fillion continues with an all new Monday February 22, season 8 episode 12 called “The Blame Game” and we have your weekly recap below. On tonight’s episode Castle (Nathan Fillion) gets abducted and must solve puzzles and mind games with a group of strangers.

On the last episode, when the son of a Russian diplomat turns up murdered, Beckett and Castle find themselves in a dangerous game of international crime and punishment, with Castle having to entertain a jovial Russian security officer who wound up more involved than anyone planned. Did you watch the last episode? If you missed it, we have a full and detailed recap right here for you.

On tonight’s episode as per ABC’s synopsis, “Castle gets abducted and must solve puzzles and mind games with a group of strangers. Meanwhile, Beckett and her colleagues race against the clock to find Castle and capture a killer.”

Tonight’s episode is going to be great so be sure to tune in to CASTLE on ABC at 10PM EST. We’ll be blogging all the action, be sure to hit up the comments and tell us how excited you are for season 8 episode 12. While you wait for the recap, check out a sneak peek of tonight’s episode below!

Tonight’s episode of Castle kicks off with a girl at her apartment getting ready to head out on the town – she finds a bullseye drawn on her door. While she is looking at the bullseye, someone dressed in all black comes up behind her and shoots her in the head and kills her.

Beckett and Ryan are at the murder scene – the victim is named Emma, she was a television producer for channel 8 and lived alone. Beckett finds the same bullseye symbol on the door and tells Espinosa to check with the database and see I he can find any information on it.

Beckett heads back to the office and calls Castle and wishes him luck during his meeting with Stephen King. Castle heads to the address that he was given – and the building appears abandoned. While Castle is wandering around inside, looking for King, he realizes he is not alone and someone turns off the lights on him.

Emma’s co-workers show up at the precinct to be questioned. Beckett gets a text from Castle telling him to come to the abandoned house ASAP. She rushes out and Ryan and Espinosa sit down with her co-workers. They say that Emma has been acting strangely lately – she didn’t have any enemies, but she did rub another producer the wrong way at the station named Buckley. The women confirm that Buckley drives a white van – just like the one that Emma’s neighbors saw at her house the night that she was murdered.

Castle wakes up – it appears that he was drugged, he is groggy and out of it and wakes up in what appears to be a Kindergarten class room. There are three other guys in the room sitting at the desks with Castle, all of them were drugged and have no idea where they are. All three guys confirm that they were lured to the same address, 143 Nichols Street. They try to get out of the classroom – but the door is sealed close. There is a camera in the room, someone is watching them inside the classroom.

Castle and his fellow prisoners start tearing the room apart and looking for a way out. They realize they are part of some sort of sick game. One of the guys gets stung by a bee, and his epi pen is gone. They find a lockbox with a picture of a bee on it – the EPI pen is inside. Castle figures out the code to open the box, it’s “Play Or Die” They get the EPI pen out and Castle gives it to the guy that was just stung – but he starts foaming at the mouth and seizing.

It looks like the EPI pen was full of poison. There’s a note on the pen it says “2 Is the cure.” They search the room some more and find a case of vials with the anecdote inside. Castle manages to get it to the guy that is going in to a seizure in the nick of time. While Castle is saving him, he finds a strange tattoo on the guy’s neck – it’s the same symbol that was drawn on Emma’s door.

Ryan and Espinosa bring in Buckley for questioning – he has an allaby and he was at a club all night. Buckley says he didn’t kill Emma, but she was shady and she was always lying. Buckley says that he caught Emma in the archive room going through old VHS tapes – they were of creepy kids wearing medallions with strange symbols on them. Buckley confirms that the symbols in the video were the same one that were drawn on Emma’s door.

Meanwhile, Alexis just realized that something fishy is going on. She thought her dad was meeting with Stephen King, but according to King’s twitter – he is in Australia. Alexis tries to call the number back that called to set up the meeting earlier with her dad and it has been disconnected. Something is definitely wrong.

In the fake classroom, the men find a gun with three bullets in it – a note comes with the gun and reveals that the last man standing will be set free. So, basically only one of them is getting out alive, and only if he kills the other guys. Castle shouts in to the camera that they aren’t playing his sick game. A television in the classroom clicks on, it’s a live feed in another room. Beckett and the rest of the guys’ girlfriends are being held prison in a Kindergarten classroom as well. In Beckett’s classroom – she and the women are given equally confusing traps and clues.

Ryan and Espinosa get the tapes that Emma was working on – they are of kids sitting in classrooms (the exact same classrooms that Castle and Beckett are in now). In the videos there is a little boy and a little girl solving the same kinds of puzzles that Castle and Beckett have. Judging from the age of the videos – Ryan and Espinosa think the little girl might be their victim Emma. Alexis shows up to the station and is frantic, she found surveillance video of Castle and Beckett being kidnapped by someone in a white van – the same white van that was at Emma’s house.

In Castle’s classroom, one of the guys – Simon – takes the gun when no one is looking and announces that he is getting out there. He has every intention of shooting and killing the other three guys so that he can be free. Simon pulls the trigger and a shot rings out. But, Simon drops to the floor – he’s dead. Castle picks up the gun and realizes that it is rigged, just like everything else in the room, and Simon just shot and killed himself. The TV in Beckett’s classroom turns on and the women see that Simon is dead – his wife begins sobbing and accuses Beckett of her husband killing her’s.

Espinosa and Ryan are all on their own – they dig up some info on Emma and learn that she used to walk dogs for a rich family named Geoffrey and Samantha Northcliff. They called the cops two nights before Emma’s death and reported a break-in and personal property was stolen – most likely the video tapes. They bring in the family’s secretary for questioning. She reveals that the NOrthcliff’s daughter Fay committed suicide two days before Emma was murdered.

According to Ryan and Espinosa’s witness – the two kids in the videos are Fay and her twin brother Brando. Apparently the Northcliffs are psychologists and were doing ground breaking research on separation anxiety. The Northcliff’s old secretary confirms that the experiments did some serious damage to Fay and Brandon. Brandon fled the country and has been living recklessly for years.

Haley and Alexis show up at the station – they tracked down the white van that was used by the kidnappers and it was registered to Geoffrey Northcliff. Ryan and Espinosa confirm that the Northcliffs are their prime suspects – and they think that they killed Emma to keep her quiet about their psychology experiments. Haley got an address in a secluded area off from the van’s registration and they rush there hoping that is where Castle and Beckett are being held.

Meanwhile, Becket managed to rig some sort of explosion – and she and the women have broken out of their classroom. Castle and the guys escape as well and they all meet up in the hallway. Castle warns Beckett not to use the gun that they found because it is rigged to kill the shooter. They all wind up trapped in a tiny room in the hallway.

In the tiny room there is another camera, and there are three levers – there is a timer on the wall, they only have five minutes to find a way out of the room. But, they have no idea what will happen once they pull the levers.

Ryan and Espinosa arrive at the Northcliffs house – Geoffrey and his wife are inside and tied up. They aren’t the kidnappers – their son Brandon is. They reveal that Brandon is one of the guys that were locked in the room with Castle, he actually is the one that is allergic to bees and nearly died. He must have staged the whole thing to convince Castle that he was just another victim.

Three of the people have gotten free from the hallway – Castle and Beckett are trapped in the room alone now with Brandon, they both figured out that he is the kidnapper and the sick, twisted guy behind the kidnappings. They learn that Brandon and his sister were tortured by his parents – he killed Emma because she wanted to expose his parents, and that wasn’t enough, he wanted his parents to pay.

Brandon tells Castle and Beckett that they have to choose which one gets to die and the other will get to go free. Castle and Beckett are able to attack Brandon and get the gun away from him just as Ryan and Espinosa arrive with Alexis to save the day. Brandon is arrested and taken in to custody and everyone gets to go home safe and sound.