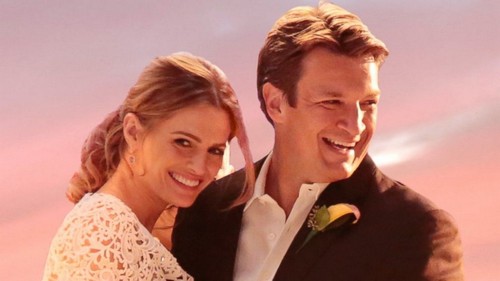 Why did Stana Katic leave Castle? This week Castle spoilers from ABC confirmed that Stana Katic was leaving the show, and her character Kate Beckett would exit in the Castle Season 8 finale airing in May 2016 and not return for Season 9. Stana Katic was fired – she did not want to leave the show.

It turns out that Stana’s reason for leaving (or being fired) the show wasn’t completely based on budget cuts, and actually had a whole lot to with her ongoing feud with co-star Nathan Fillion (Richard Castle).

Castle’s entire premise of the show is based on his romance with Stana Katic’s character Kate Beckett. So, you can imagine how shocked fans were when Kate’s exit was announced. Can the show really go on without Katic?

According to a new report, it sounds like there was no way Castle was going to go on WITH Stana and Nathan Fillion sharing the spotling, and one of them had to go. Seeing as how the show is named after Fillion’s character, it looks like Katic is the odd woman out.

An inside source revealed to US Weekly that Nathan Fillion and Stana Katic’s feud on the set of Castle has been going on for years – and it has gotten to the point that the two actors can’t even stand to be in the same room with each other.

The insider dished, “Stana Katic and Nathan Fillion completely despise each other. They will not speak when they are off-set, and this has been going on for seasons now. This season, it got so out of hand they made Stana and Nathan go to couples counseling together.”

You have to give Stana and Nathan props, it takes a real actor to be able to make out with someone they despise that much. Do you think Castle will survive without Kate Beckett? Are you sad to see Stana Katic go? Let us know what you think in the comments below!