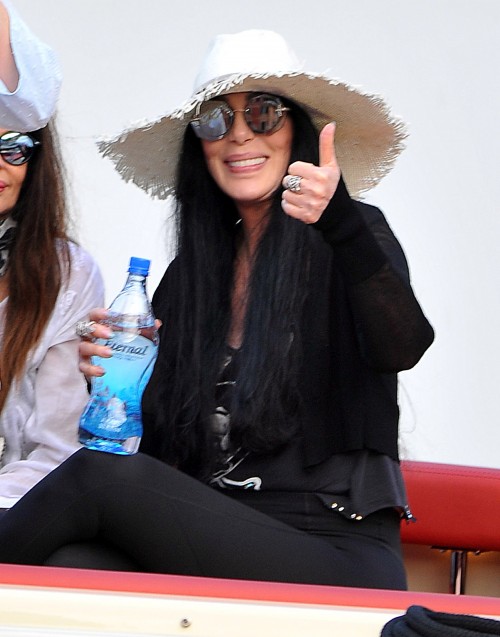 70s icon Cher has been spotted enjoying a holiday in Italy with friends. The “If I Could Turn Back TIme” singer turned 70 last month despite gossip spread last December by a tabloid that Cher wouldn’t reach that milestone birthday

The National Enquirer recently did a cover story saying that Cher is sick, dying and broke. Oh, and she’s alone too. The so-called insider claimed, “She’s lost millions on bad investments, and she’s fighting back furiously — but it may be too little, too late.”

Um, okay, whatever that’s supposed to mean – it’s a bit vague and unclear. So why then, is she in Italy? If she were tapped out, wouldn’t Cher be secluded somewhere private? And dying? Ditto. Would she care if paparazzi snapped photos of her out and about? Would she look so good and put together?

The source continued by saying that Cher has lost her reported $350 million fortune. They also say that the singer’s medical bills have depleted her finances so horribly that she doesn’t have enough cash to cover her own funeral.

Again, if Cher has been sick or is dying, it would be up to her to disclose something so private. There are many examples of celebs who choose to not go public with something so personal, but Cher appears to have no health concerns to worry about.

Plus, because the singer filed a lawsuit recently, the tabloid has twisted it to make it appear as though it has drained her finances dry. The source also reported that because Cher is so grief-stricken over the losses of dear friends Prince, Natalie Cole, David Bowie and others, it’s affecting her physical health.

Wow, those are big claims to make, especially when you look at the photos below of Cher, taken this week, appearing healthy and happy in Italy eating ice cream on vacation and hanging with friends. Does she look sick to you? We don’t think she’s anywhere near death’s door.

Plus, given her vacation to Italy – she’s got money – and friends too. So the broke and alone parts of the story seem off the mark as well. Perhaps the photos of her looking worse, featured in the tabloid, are taken out of context.

We’re sure Cher is saddened over the deaths of these performers, but that’s not stopping her from enjoying her European holiday, is it? There’s no way these pics are a planned photo op to discount the death talk – that’s too much trouble to go to.

Take a look at these photos below and then you decide. Let us know in the comments what you think of Cher and whether these allegations about her health, finances, and mortality are true or not.

Be sure to keep your browser right here at CDL for all the latest celebrity and gossip.