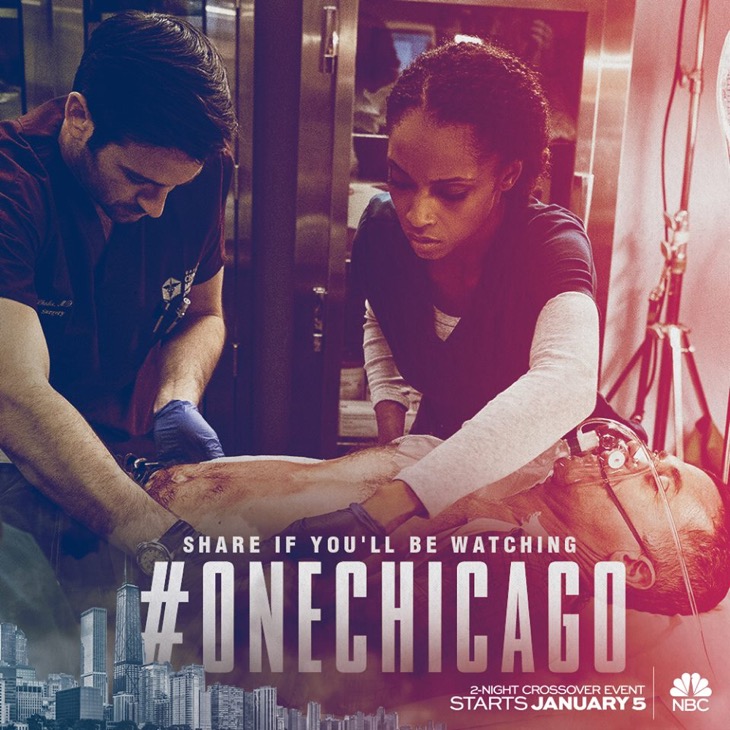 Tonight on NBC Chicago Fire returns with an all new Tuesday, January 5, season 4 winter premiere called, “The Beating Heart” and we have your weekly recap below. On tonight’s episode, squad members gather at Chicago Med after one of their own is attacked; Cruz (Joe Minoso) works with the Chicago P.D. to find Freddie, (Ralph Rodriguez) who’s missing.

On the last episode, members of Firehouse 51 were less than thrilled when Captain Patterson (guest star Brian White) stepped in as replacement for Chief Boden (Eamonn Walker) while he dealt with clearing his good name. When Severide (Taylor Kinney) learned of the potential whereabouts of Serena (guest star Ilfenesh Hadera), Chicago P.D’s Officer Atwater (LaRoyce Hawkins) and Officer Ruzek (Patrick John Flueger) headed to Lake Carlyle to try and uncover additional clues on Boden’s case. Meanwhile, Herrmann (David Eigenberg) and Otis (Yuri Sardarov) gave Freddie (guest star Ralph Rodriguez) a job that keeps him close by and Jimmy (Steven R. McQueen) and Chili (Dora Madison) elicit more attention then either bargained for, causing some friction between them. Jesse Spencer, Monica Raymund, Kara Killmer, Joe Minoso and Christian Stolte also star. Did you watch the episode? If you missed it we have a full and detailed recap, right here for you.

On tonight’s episode as per the NBC synopsis, “squad members gather at Chicago Med after one of their own is attacked; Cruz works with the Chicago P.D. to find Freddie, who’s missing; Choi and Halstead work on an attempted-suicide victim; Mouch surprises Trudy; and Brett and Jimmy worry about Chili, who’s acting oddly.”

Tonight’s season 4 episode 10 looks like it is going to be great and you won’t want to miss it, so be sure to tune in for our live coverage of NBC’s Chicago Fire.

Freddie as in the young man that Cruz had been trying to help recently had stabbed Herrmann on the last episode of “Chicago Fire”. And picking up from where they left off, things aren’t looking good for the Chicago Firefighter.

Freddie had apparently taken offence when Herrmann was trying to joke around with him by calling him “short and fat”. So he just stabbed him and, rather than get help or show any kind of remorse, Freddie then made a run for it which left Herrmann to bleed out on his own. Though, fortunately, Dawson had chosen that night to break one of Herrmann’s cardinal rules about the maraschino cherries being only for royalty and she went into the break room looking for ingredients to make herself a cosmopolitan.

And as luck would have it, she found in Herrmann in time.

So Dawson the former EMT took care of her friend and Otis called 911. But the entire situation had Severide on edge. He wanted to blame someone and so he tried to blame Cruz for Herrmann’s predicament. After all he had still been in a position – he would have told Cruz not to bring Freddie around them.

Freddie was a former gangbanger and he did still have ties in that community. However, Boden didn’t think it was necessary to cry or complain about things they had no control over. So he told Severide to lay off of Cruz.

Chicago PD had been alerted to the crime and Cruz had given them all the information they needed to find Freddie. Therefore, all that was left for the firehouse to support Herrmann. And that meant taking over babysitting duties what with Herrmann in the hospital and his wife constantly by his bedside. As well as someone constantly at the hospital to give the rest of the crew updates in case anything happened.

So Dawson ended up staying on at the hospital. She had been with the crew when they answered their first distress call of the new day but after nearly getting blown up – Casey thought it would be better if he gave her a few days off to dedicate to Herrmann.

Though that fire they had been a part of, did leave some remaining issues. An apartment building had caught on fire and it turns out it had been caused by a gas leak from the basement where a young woman had attempted to kill herself. She had actually tried to contain the gas into the bag she had put on her head but after she passed out – the gas spread upstairs where it eventually caught fire on one of the upper levels.

But what Jessica Pope did was not a concern. It was the fallout that had people worried. Several of the residents in the building had gotten badly burned and Cruz had inhaled far too much smoke. So he along with the others had to take a nice long ride to Chicago General.

Now Burgess later went down to the hospital to question Jessica because technically she had nearly killed several people and the police had to make sure that nothing else was going on. Yet Jessica still remained unconscious. So that left Burgess to wander around the hospital for a while when she inadvertently ran into Cruz.

Cruz had wanted an update on the Freddie search and Burgess had told him that the police still couldn’t find him. So going against doctor’s advisement, Cruz checked himself out of the hospital and went head straight into the heart of gang territory.

Cruz had gone over to Freddie’s old crew’s house and he had run into some problems as he tried to push himself pass several gangbangers. And so Cruz had nearly gotten himself killed by looking for Freddie on his own. But at the last minute, Severide arrived on the scene and saved him.

Otis it seems had gotten wind of Cruz making a run for it so he warned Severide and Severide knew just the place to look.

But, despite how it ended, Cruz had done a stupid thing and Severide had to talk to him about it. So later he asked Cruz what was going on and Cruz replied that he had made a mistake. And then he promised that he wouldn’t do it again.

Only that part was kind of a lie.

Anyways, Herrmann had initially been bleeding out into his liver when he was first brought in but nothing the doctors were doing had managed to stop the bleeding. And instead the situation continued to deteriorate. So the doctors made the call and they said Herrmann had to have surgery.

Yet before he went ahead with it, he had wanted to talk to Cruz for himself. And it was some time before Cruz could get to the hospital. Their firehouse had gotten another emergency call and that time it had been Freddie.

Freddie had been running from the police when he had gone out on the fire escape though unfortunately the thing was collapsing underneath him. So the firefighters had use the ladder to get to Freddie and Cruz volunteered. He asked Chief Boden for the chance to clean up his own mess and the Chief gave it to him.

So all that was left for Cruz to convince Freddie to take his hand. Freddie had apparently been worried about Cruz being mad at him but, once he had been reassured, he let Cruz take him to safety. Where he was then arrested.

And Cruz did get his chance to speak wot Herrmann. He told him how sorry he was and that he never wished for any of this to happen and Herrmann told him that he never once blamed him for what Freddie did. He said he was mad at Freddie but not at Cruz.

Yet Herrmann would have probably have said more but he began to crash and the doctors had to rush him into surgery.

Now Herrmann might not make it but at least he did several things before he had to be rushed away. He helped Cruz with his guilt and he told Mouch not to delay his proposal to Platt. So Mouch and Platt did get engage and they’re hoping Herrmann will be there at their wedding.

But if anything happens to Herrmann then not much they can do and Chili might very well go off the deep end. Lately she’s having been issues with all of her friends but Herrmann had been a surrogate father to her and so no matter what’s going on in her life – it’s only going to get worse if Herrmann doesn’t make it.