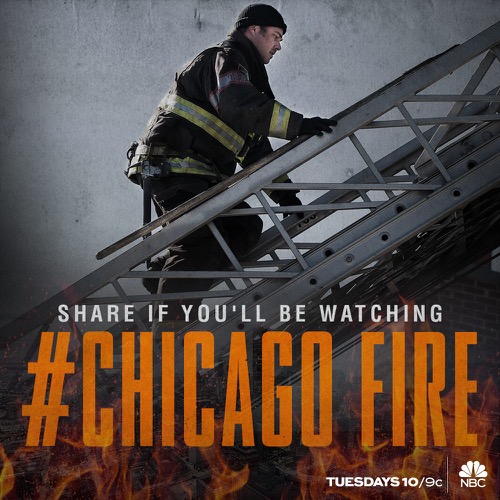 Tonight on NBC Chicago Fire returns with an all new Tuesday, March 29, season 4 episode 17 called, “What Happened to Courtney” and we have your weekly recap below. On tonight’s episode, Severide (Taylor Kinney) and Cruz (Joe Minoso) find a child’s remains inside a chimney while investigating a possible carbon monoxide leak inside a home.

On the last episode, Casey reconsidered his run for alderman after he was targeted by a propaganda campaign; the squad responded when a man was trapped inside of a burning car; Trudy’s nerdy brother planned Mouch’s bachelor party; and Jimmy and Brett investigated a kidnapping on their own. Did you watch the episode? If you missed it we have a full and detailed recap, right here for you.

On tonight’s episode as per the NBC synopsis, “Severide and Cruz find a child’s remains inside a chimney while investigating a possible carbon monoxide leak inside a home. In other events, Casey braces for the worst in his run for alderman while Alderman Becks continues to bad mouth him to the press.”

Tonight’s season 4 episode 17 looks like it is going to be great and you won’t want to miss it, so be sure to tune in for our live coverage of NBC’s Chicago Fire. While you’re waiting sound off in the comments down below what you think of this season of Chicago Fire so far!

The Fire Department received a call to a residential home on tonight’s episode of “Chicago Fire” but something hadn’t been right about the scene they found.

Apparently the house had been deserted when they got there so there had also been no one around to ask about the emergency. Much less see anyone to verify if there was someone still in the building. So the guys were then forced to pull out their equipment to test the air in the house because the Chief had to check it before he sent his men in. And once they found a high level of carbon monoxide in the air, the Chief told his men mask up and sent them in to secure the building. Which included finding the leak that caused the carbon monoxide.

However, the leak was proven to have come from the house’s multi-purpose chimney and thus one of the guys had to go up on the roof just to see if there was anything blocking it. And what they found was a small corpse. As in the body of a child been stuffed down the chimney as a way to hide it, but it ended up creating blockage that could have killed the homeowners. That is if they had been at home and not on vacation.

The family that bought the house had done so a few months back and nothing had seemed amiss to them when it bought it. Nor did they have a chimney problem while they were there. But they have been on vacation for several days so there must have been someone watching the house and saw opportunity when it presented itself.

So Chicago PD had been called to the scene and they had been notified about the possible murder. Yet, in spite of one set of people saying that the firefighters were actually free to remove the body from the chimney, the detective that had later showed up had yelled at Severide for contaminating her crime scene. She said she was in charge and that she was going to have to follow up with Severide to make sure that everything he had written down everything he had seen.

Only Severide had noticed something about Baby Doe. He had caught the glimpse of a necklace around the child’s neck and he had remembered as part of Courtney Harris’s case file. Courtney had been a little girl that had wandered away during her parents’ house party on the lake and so many had assumed that the child had walked into the lake. Although, CFD had dragged it and they had never found Courtney’s body.

Severide though had remembered that Courtney had been given a St. Nicholas train by her mother so he recognized it when he saw it again. But the detective on the case could only look into that theory of his because she ultimately had to get DNA. So she had tried looking for Courtney’s family though they she couldn’t find them. And they had changed their number several times.

Although there had been an explanation for that. Courtney’s parents had unfortunately gotten a divorce after Courtney went missing and the child’s father had later moved back to Michigan to start over, but Courtney’s mother stayed in the area. So Severide was able to find her through of some of his connections and he did try to tell her that the detective was looking for her. Only the moment the mother knew that the cops were looking for her, she then began to ask about her child.

So that had placed Severide in an awkward positon because he was sure he was right about the corpse being Courtney yet he broke protocol when he told Emma Harrison about his suspicions. Apparently he had notified the mother about there being a possibility thereby filling her up with false hope and to make matters worse he had also broken the chain of custody with the hair brush. The same hair brush that he had given the detective because it had contained Emma’s DNA, but it still wanted to run against the body they found.

And therefore the chief had to ask. He had to ask Severide why he had gone beyond the call of duty and the truth turned out to be a sad story about Severide going over to his uncle’s place and always seeing his baby cousin and Courtney playing at her house. You know the one that was on the corner that and in pristine condition.

Yet that had all gone away after what happened to Courtney. Her family didn’t care anymore about throwing neighborhood barbeques or maintaining their front lawn but Severide’s uncle had tried to help. And eventually it was all for nothing because Courtney’s family, especially her parents, just collapsed without her.

And yet Severide hadn’t been the only person to drag the lake. All the other guys had been there as well though eventually they all became consumed with Casey’s alderman race. Casey was still trying to win and he had great ideas about what he could do if he were to win.

But Beck decided to play even dirtier in the final round. It seems he had taken a tv interview in order to publicly accused Casey of wanting to claim two paychecks from the city, when they hadn’t worked, he then booked one last minute debate. That Casey couldn’t’ attend.

Casey had been receiving a lot of flak from his department about not letting his campaign compromise his job at CFD. So Casey had a promise, He said that he wasn’t going to push anything else around on his schedule and that he was going to stay focused as firefighter. And in that case, he had to miss the last debate.

Though the press did get a good shot of him saving someone’s life while Alderman Becks had been in front of cameras claiming he wasn’t the only one committed to the city. So Casey had still looked good and that’s how he ended up winning the election. And therefore the one upsetting thing about tonight’s episode had been Courtney. Who was confirmed as the body they found.

So Holloway had tried to get into contact with Emma and she had then gotten into contact with Severide when she couldn’t get a hold of Emma. Emma had apparently been at her house with her brother David and David had been trying to convince her to ignore the police. He said that they couldn’t be trusted and that they could easily blaming her for snapping her won daughter’s neck because her husband hadn’t actually wanted kids. Yet, there was no way David could have known about the cause of death unless it had been him that hurt the toddler.

And after Severide figured that out, he had Emma call the police while he “detained” David. So the case was brought to a conclusion but Courtney’s mother Emma now had to face the fact her own brother killed her child. And left her in limbo for years to save his own skin.

Though, in the meantime, the firehouse has something to celebrate what with Casey’s win and Stella personally had a moment when she finally kicked out her ex-husband.