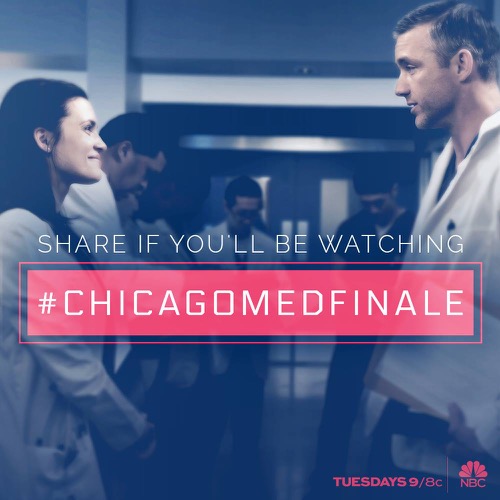 Tonight on NBC their new medical drama Chicago Med returns with an all new Tuesday May 17, season 1 finale called, “Timing,” and we have your recap below. On tonight’s episode Dr. Rhodes (Colin Donnell) treats his mentor and Goodman faces personal issues in the Season 1 finale.

On the last episode, April and Dr. Halstead clashed over how to treat an alcoholic homeless man with a broken leg. Also, Dr. Manning continued to grieve over her husband’s death; two elderly women with the same symptoms shared a surprise link; Halstead mulled over a job offer in California. Did you watch the last episode? If you missed it, we have a full and detailed recap right here for you.

On tonight’s episode as per the NBC synopsis, “Dr. Rhodes treats his mentor and Goodman faces personal issues in the Season 1 finale. Also: April deals with a disorderly patient; Dr. Manning’s past catches up with her; and Sarah’s graduation day arrives, but she remains conflicted about her future.”

Tonight’s season 1 finale is going to be exciting. We’ll be blogging it right here for you.

Tonight’s episode of Chicago Med kicks off with Reese and her boyfriend arriving at the hospital. Tomorrow is Reese’s graduation, her mother can’t make it, so her boyfriend is taking her out to celebrate afterwards. He’s making a much bigger deal out of it than she is.

A baby is rushed in to the hospital, his name is Michael Thomas and he is only 6 months old, his parents are freaking out because he has been vomiting and has a fever. His mother cries that something isn’t right. Natalie and Reese are on the case.

Meanwhile, an ambulance arrives with Dr. Downey in it – he was at home and called 911, he can’t even speak. Will and Dr. Rhodes rush him in to an exam room, his liver is breathing in to his chest, last week they were trying to minimalize the tumor on his liver and there were apparently complications during the surgery.

Dr. Choi corners Dr. Charles – he’s concerned about the parrot that he rescued. He doesn’t sleep at night, he’s aggressive, and Choi has been trying to give him away but no one will take him. Charles tells Choi not to give the bird away yet, he’s going to come by his house to meet him.

Goodwin checks with Maggie at the front desk, she’s worried about Dr. Downey. Maggie says that Downey is out of surgery and stable. Will stops by, he is still on the job hunt – he says that he has applied in California. Maggie doesn’t think that Will should leave so fast … she tells him that Natalie just took off her wedding ring.

Natalie and Reese run some tests on baby Michael – his heart is enlarged, they are trying to explain to the doctor that it is probably genetic, and Michael flatlines. They are able to bring him back and then rush him up to NICU. Natalie tells his parents that they are going to need their blood samples so they can figure out what exactly is wrong with Michael and how they can help him.

A drunk hockey fan with a smashed face is brought in – he’s out of control. April and Will are trying to deal with him and he shoves April in to the door frame, she falls to the ground and gasps. Will thinks she may have a broken rib, she insists that she is fine and they are all over-reacting, but he wants to do an X-Ray.

Meanwhile, Rhodes is worried because Dr. Downey still hasn’t woken up from his surgery. He thinks he might have had a stroke on the operating table, he calls the neurosurgeon down to check on him, they decide to do a CT scan of his head.

Dr. Charles comes over to Choi’s for lunch. He checks out the parrot and says that he has PTSD. Dr. Choi is skeptical, but Charles explains that birds are highly intelligent and there is actually a study that says that animals with PTSD can help people with PTSD. So, Choi and the parrot are a perfect fit, Charles tells him to keep him – and tech him something new to say besides “don’t touch that.”

Reese is really upset about baby Michael. She rushes the blood samples down to her boyfriend in the lab. She cries to him and explains that Michael is so tiny and helpless, she wants to be able to figure out how to help him ASAP.

The scans come back on Dr. Downey and it’s not good. He didn’t have a stroke, he’s going to wake up, but when he does wake up he won’t live for long – there’s a mass on his brain, the cancer in his liver has spread. Downey wakes up and the doctors explain to him that he has a tumor on his brain. The neurosurgeon explains that if they remove it, it could have detrimental effects, he could lose the sense of touch and coordination. Downey announces he doesn’t want surgery – Dr. Rhodes is upset, he can’t believe that Downey is giving up just like that.

It’s late and everyone is heading home, Dr. Rhodes goes back to Dr. Downey’s room to check in on him, he’s in a lot of pain. He tells Dr. Rhodes that he wants to “check out early,” and needs his help killing himself. Rhodes tells Downey that he can’t do that.

Choi heads home to try and teach his bird how to fly…It’s not going well. April heads home to hang out with her boyfriend, she tells him about getting roughed up in the emergency room and jokes that nursing is a dangerous profession. He wants her to quit her job and marry him. Was that a proposal? April is shocked …

Reese’s boyfriend finds her sleeping in the emergency room – he wakes her up and tells her that she missed her own graduation. She confesses that she didn’t want to leave the baby. The test results come back and Reese calls in Natalie. They share the results with Michael’s parents and explain to them that his body has a hard time braking down fat and it caused a spike in his blood sugar. It’s totally manageable – and if he eats the right food Michael will live a long healthy life. His parents are thrilled.

Goodwin doesn’t show up to work – so Maggie stops by her house to check on her. She’s a mess, Goodwin explains that her husband Bert just left her because she wasn’t making him happy. She insists on coming to work, even though Maggie wants her to take the rest of the day off.

Dr. Rhodes stops by to check on Downey – he’s getting worse. He brought along a little present, something to remind Downey of the islands. Downey tells Dr. Rhodes that he has left instructions, he wants to be cremated. Dr. Rhodes cries and tells him that it has been a good ride. After Rhodes walks out, Dr. Downey’s machines start going off. The nurses rush in – Rhodes tells them to let Downey go, he has a DNR.

Reese heads down to the pathology lab now that she has officially graduated. She tells the woman in charge that she won’t be working there. She tells Reese that pathology is her match, if she doesn’t take the job, then she won’t have one. Reese says she doesn’t know what she is going to do yet, but its not pathology.

A new round of med students have arrived at the hospital – Natalie is thrilled to see an old friend of hers in the class, a former firefighter named Jeff Clarke. She and Maggie fawn over him and he reveals that he is divorced.

April’s X-Ray results come back, the fall didn’t hurt her at all, but Will has bad news – apparently April has Tuberculosis.

Reese runs in to Dr. Charles on the way out – she’s panicing, she tells him that she just quit pathology. Charles jokes, “Good fricken move sister.” He reassures her that everything is going to be just fine. Charles heads to Dr. Choi’s house to check in on him and is thrilled to see that he and the Parrot are doing great – and he flies now.

Dr. Rhodes takes some personal days – he heads to the island that Downey was telling him about and he spreads his ashes in the ocean.