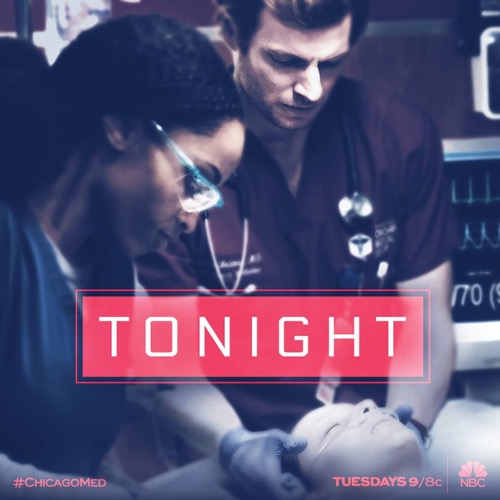 Tonight on NBC their new medical drama Chicago Med returns with an all new Tuesday January 19, season 1 episode 6 called, “Bound,” and we have your recap below. On tonight’s episode Dark family secrets emerge when Dr. Rhodes’  (Colin Donnell) father is honored for making a large donation to the hospital.

On the last episode, a member of Firehouse 51 clang to life and took a sudden turn for the worse as medical staffers raced to give treatment. Meanwhile, Dr. Natalie Manning prepared for her pregnancy; and members of Chicago P.D. probed the case of a woman pulled from a fire. Did you watch the last episode? If you missed it, we have a full and detailed recap right here for you.

On tonight’s episode as per the NBC synopsis, “Dark family secrets emerge when Dr. Rhodes’ father is honored for making a large donation to the hospital. Meanwhile, the Department of Homeland Security arrives when two injured airplane stowaways are brought to the hospital; and Dr. Sarah Reese must deliver heartbreaking news to a boy.”

Tonight’s season 1 episode 6 is going to be exciting. We’ll be blogging it right here for you. In the meantime hit up the comments section and tell us your thoughts on this new show and enjoy a sneak peek of tonight’s episode below for your enjoyment! Sound off in the comments down below on what you think of Chicago Med so far!

Connor’s father had recently donated millions of dollars to the hospital and on tonight’s episode of “Chicago Med” the hospital had decided to return his generosity by throwing a celebration in his name.

Only Connor somehow found himself in the middle of a Homeland Security investigation. So the spotlight was once again back on him as he valiantly tried to save the lives of two illegal immigrants that had seriously gotten injured because they had stowed away on a flight. And according to the woman claiming to Maria Gonzales, she and her brother had taken such drastic measures because they had been trying to escape their father who had planned on selling her.

So right away Connor had sympathized with them and had tried to do the best he could medically speaking for the both of them. But Miguel Gonzalez died from his injuries and Homeland Security had breathing down Connor’s neck demanding to speak with Maria since she had been admitted. And therefore Connor had trying to put them off for as long as possible.

But all in all they had chosen the worst possible day to upset. His father’s party as well as the new wing to the hospital had been thrown in Connor’s late mother’s honor. And according to Maggie, he probably wouldn’t want to remember his mother because she had killed herself.

Will had been hassling Connor again about being rich when Maggie told him about Connor’s mother. The woman had apparently thrown herself off the roof of the family home. Which had unfortunately been three stories high. And so she had told Will to let up on the other man because at that moment Connor needed a little sympathy.

However, sympathy wasn’t that hard to come by in a hospital. Sarah and Nat had been checking on this little boy that had been brought in for a small fall and they had found out together that Parker had carried disease that would leave him dependent on a ventilator in the near future. So both women had been struggling with how to tell the family news when suddenly Nat’s water broke.

She had gone into labor early and that had left Sarah on her own. So Sarah had then turned to Daniel for help and initially all he was going to do was sit in on the interview. But Sarah had ended up losing control of the conversation after she had to tell Parker’s parents that their younger son might have the same disease as well.

The parents you see had immediately wanted to know what to do next if their young son was also sick and Sarah had stumbled. She had said that they could use stem cells in hopes of treating Seth before the disease becomes apparent and the word “hope” had set the parents off. Although luckily Daniel had been there to sort of take over and tell the parents that until they have gotten the test results back on their other son then they shouldn’t be considering the worst case scenario.

He had wanted them to remain focus on the positive and in the end the younger son was spared of the disease.

And as for Nat, her mother-in-law had come by the hospital to support her. Yet the other woman then took it upon herself to warn Will away. She said Nat had her hands busy and basically told him that he was not needed.

So he found himself shafted from the delivery room and he hadn’t been there even as Nat wanted him to be. Her delivery had speeded up towards the end but she still hadn’t been making a lot of progress. And so her OBGYN had become concerned.

An ultrasound had followed and it showed that the baby was facing the wrong way. So Nat had eventually been advised to have C-section but she chose to listen to Maggie instead. Maggie had said that she could turn the baby and she did.

And thankfully Nat was able to give birth to a healthy baby boy.

But Connor snapped towards the end of the day. Homeland Security had taken Maria away even though he had tried to fight it. And later his father’s speech about his mother the late Elizabeth Rhodes had pushed him over the edge.

So Connor ended up having a private confrontation with his father. And he threatened to reveal the truth about his mother’s suicide to his sister Claire.