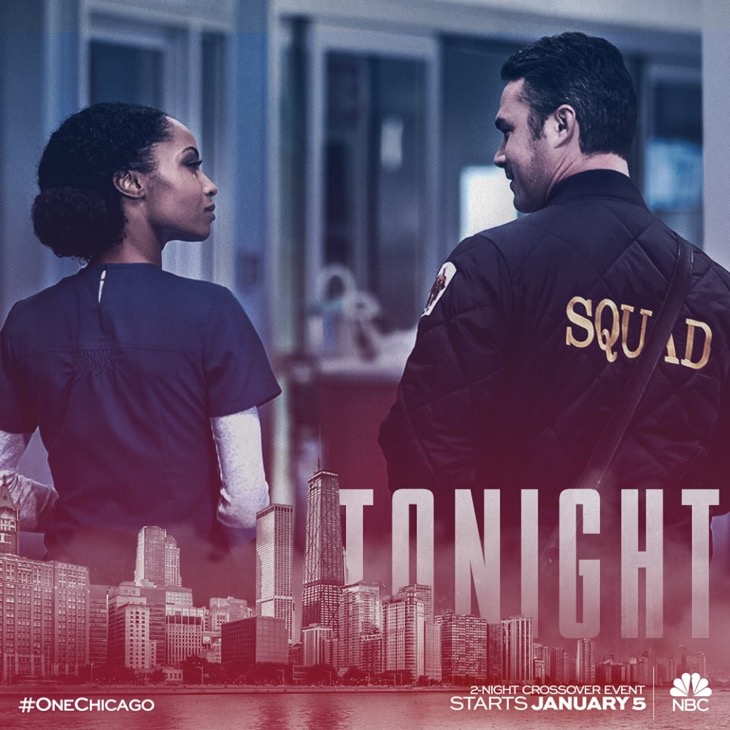 Tonight on NBC their new medical drama Chicago Med returns with an all new Tuesday January 5, season 1 winter premiere called, “Malignant,” and we have your recap below. On tonight’s episode a member of Firehouse 51 clings to life and takes a sudden turn for the worse as medical staffers race to give treatment.

On the last episode, after shots ring out at a movie theater, the Chicago Med doctors worked to treat the victims while hospital administrator Sharon Goodwin (S. Epatha Merkerson) attempted to keep the press at bay. To treat a teenager with an eating disorder, Dr. Natalie Manning (Torrey DeVitto) enlisted the help of Dr. Daniel Charles (Oliver Platt), but his unorthodox methods rub Natalie and the teenage girl’s mother the wrong way. Meanwhile, Nurse April Sexton (Yaya DaCosta), Dr. Will Halstead (Nick Gehlfuss) and Dr. Ethan Choi (Brian Tee) treated a racist patient whose strange form of bigotry surprised them all. Colin Donnell, Rachel DiPillo also star. Did you watch the last episode? If you missed it, we have a full and detailed recap right here for you.

On tonight’s episode as per the NBC synopsis, “a member of Firehouse 51 clings to life and takes a sudden turn for the worse as medical staffers race to give treatment. Meanwhile, Dr. Natalie Manning prepares for her pregnancy; and members of Chicago P.D. probe the case of a woman pulled from a fire.”

Tonight’s season 1 episode 5 is going to be exciting. We’ll be blogging it right here for you. In the meantime hit up the comments section and tell us your thoughts on this new show and enjoy a sneak peek of tonight’s episode below for your enjoyment!

Dr. Ethan Choi was Jessica Pope’s doctor on tonight’s episode of “Chicago Med” and a few things aren’t adding up for him.

Jessica had been the woman the Chicago Fire Department had found with a bag on her head and so the police department had looked into the matter for themselves. However, there weren’t any other foot prints down the basement with Jessica and from what they could tell there wasn’t foul play. So naturally they believe she tried to kill herself.

But there’s something about the case that Dr. Daniel Charles calls “hinky”. Apparently they had found chemotherapy in Jessica’s system and so they know she was fighting cancer but another thing that was found were receipts. Jay Halstead had brought in all of Jessica’s possessions that weren’t damaged by the fire and Daniel the resident therapist took a look at them.

He said the fact she put all of her receipts into the same bag meant she was conscientious. And as he was looking through the receipts, he found a confirmation for a trip to Paris that was six months away. Which was probably when Jessica would have been finished with her chemotherapy.

So Daniel thought about that and he said he didn’t make sense for someone who was so conscientious to make a trip for six months in advance if her chemotherapy hadn’t been going well. Or if she had been feeling suicidal. And therefore he wanted Dr. Will Halstead to ask his detective brother to look again into Jessica’s private life.

Although Will’s connection to his brother ended up getting him into trouble with colleague Dr. Connor Rhodes. Jay you see had asked his brother for his personal opinion on Herrmann’s case and Will had said that he wouldn’t have waited so long to go into surgery. And Will also said that he wasn’t the doctor on Herrmann’s case so he didn’t know if he would have done something differently.

But Jay had gone back to his friends in the Fire Department and he had told them what his brother told him. Which was that he would have gone into surgery sooner. So Severide felt like he had to confront Connor about that and he asked the man to his face if he might have made a mistake in Herrmann’s care.

And of course that upset Connor. Herrmann had been a friend of his as well and he didn’t appreciate it when someone accused him of being lax on the job. Though the real kicker came when Severide told him that not all the doctors agree with what Connor did.

It made Connor feel like people were willing to stab in him in the back and so he questioned the wrong person about it. He accused Dr. Sam Zanetti, a woman he was sleeping with, of undermining him. And she got so angry that she said she had to rethink their relationship. I.e. the one outside of work.

Yet Connor did come to the right conclusions in the end and he took it up with Will. And later apologized to Sam.

And Will told his brother to never ask him another hypothetical question which Jay was fine with as long as Will never asked him to get evidence from an ongoing police investigation. Jay had found Jessica’s suicide letter and the letter stated that a man had betrayed her trust. Therefore the detectives had believed she was in love someone and when the relationship didn’t work out – she killed herself.

Only Daniel was challenging that theory. He ordered an autopsy on Dani, Will and Connor’s patient, and she died from an overdose of chemotherapy but like Jessica didn’t have cancer. So Daniel began to look into other patients and he came across Dr. Dr. Natalie Manning’s case. Nat had been taking care of Carol Sheppard and Carol was supposed to have mouth cancer.

Though that too could not be found and instead the woman was dying from an overdose of chemotherapy. Thus the hospital weren’t just dealing with a negligent doctor – they were dealing with a murderer. And the case had to be turned over to the police.

And when the hospital wasn’t dealing with a killer on the loose, April’s baby brother was creating havoc. It seems he was a third year resident and he had gone to finish out his residency at his sister’s hospital because he knew she would help him out on the job. But there’s just one thing wrong with that. It looks like he can’t keep up un less someone is helping him.

So he’s made out to be a doctor.

And thankfully Connor is. Connor had checked on Herrmann and Herrmann’s condition was rapidly improving.