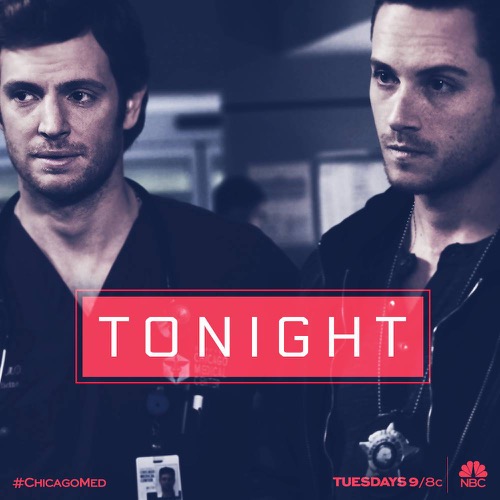 Tonight on NBC their new medical drama Chicago Med returns with an all new Tuesday January 26, season 1 episode 7 called, “Saints,” and we have your recap below. On tonight’s episode Sharon Goodwin (S. Epatha Merkerson) puts her job on the line for a patient in need of a lifesaving bone-marrow transplant. Meanwhile, April (Yaya DaCosta) cares for a homeless man.

On the last episode, dark family secrets emerged when Dr. Rhodes’ father was honored for making a large donation to the hospital. Meanwhile, the Department of Homeland Security arrived when two injured airplane stowaways were brought to the hospital; and Dr. Sarah Reese had to deliver heartbreaking news to a boy. Did you watch the last episode? If you missed it, we have a full and detailed recap right here for you.

On tonight’s episode as per the NBC synopsis, “Sharon Goodwin puts her job on the line for a patient in need of a lifesaving bone-marrow transplant. Meanwhile, April cares for a homeless man; Dr. Manning’s parents arrive; and a couple are injured during their first date by a hit-and-run driver.”

Tonight’s season 1 episode 7 is going to be exciting. We’ll be blogging it right here for you. In the meantime hit up the comments section and tell us your thoughts on this new show and enjoy a sneak peek of tonight’s episode below for your enjoyment!

A young couple were brought into the emergency room on tonight’s episode of “Chicago Med”. Apparently they had been on their first date and were just getting to know each other when the car they were in got t-boned by Walter Blevins.

Walter was an ex-con that had been clean for a full eighteen years when out of the blue he stole a car at gunpoint and led the police on a car chase that resulted in a horrific accident. Yet Walter hadn’t seemed to be happy about what he had done. He had actually apologized to anyone that would listen. He just kept saying “I’m sorry, I’m sorry”.

So his doctor had taken what Walter said as actual contrition. Though whether Walter was guilty or not hadn’t played a part on the treatment he received. Will had treated him as if he was anyone else and he had been concerned about him after he noticed that Walter was coughing up blood.

That part hadn’t made any sense because Walter had only come in with a broken arm. And so Will had run additional tests which ended up showing a mass on Walter’s lung. However, Walter already knew about it.

He had gone to the doctor a couple of weeks back and he had found out he had lung cancer. But Walter hadn’t wanted his wife to know nor did he wish to be treated for his cancer. If anything Walter had been in a rush to get to prison.

While his victims on the other hand were barely hanging on. The woman, Jess, had internal bleed that couldn’t be detected so she had been rushed into the OR. And fortunately Connor and Dr. Sam were able to stop the bleed but Connor had later noticed that something was wrong with Sam’s arm.

She said she had hit it when she was in Orlando and that it was fine. Yet he noticed that it was hot to the touch and was clearly red. So he basically marched her to orthopedics and that ultimately backfired against him and Jess’s date.

Jess’s would-be boyfriend Mike had also been bleeding out interlay though the doctors hadn’t noticed it until it was nearly too late. And so his surgery had to be a rush job yet Sam – who had been put in a brace – had taken part in supervising the surgery as an attendee. Where she then laid into Connor about every single thing he was supposedly doing wrong.

Connor had figured she was upset about her arm and how he confirmed it was a fracture. But Sam hadn’t wanted to admit to that. Or the fact that she had been overly aggressive while he had been performing surgery.

So their relationship hit a bump in the road.

Meanwhile Will finally managed to get on Nat’s mother-in-law’s good side. Helen had apparently grown concerned after she heard that Nat’s parents wanted her and the baby to move back to Seattle. And so when she heard that Will planned on staying in Chicago because it’s his hometown – she no longer had a problem with his feelings for Nat.

If anything she welcomed them. For she knew that if he began to date Nat that Nat would be more inclined to stay in Chicago. Which would also mean that Helen got to still have Nat and Owen in her life. So out of pure self-interest, Helen encouraged Will’s feelings. And now wanted to befriend him.

But Will had a more pressing concern besides Helen trying to matchmake him with Nat. He had figured out why Walter had stolen the car. The other man did it in order to go to jail and receive free healthcare because he didn’t have insurance. So Will did say something to his brother but he made Jay promise not to say anything.

Jay had already gone behind his brother’s back once before so he knew better than to try it out a second time. And hadn’t said anything to Officer Roman when the fellow officer came to take Walter away.

Elsewhere, though, April had met a patient who she believed to be the living embodiment of saint because he had devoted his life to taking care of others. But the truth ended up being that he had a stroke a while back and it had impaired his judgement. So Robert Parker hasn’t been like Thomas of Assisi at all. He had just been ill.

And after his second stroke, he lost even more of his faculties. So Daniel made a few calls and he got into Robert into a state run nursing home where he’ll have someone watching him and making sure that the rest of his life could at least be livable. Yet April had felt like sort of let down by Robert’s prognosis. She had wanted to believe that people could be capable of good for no other reason than they wanted to.

So Daniel told her to look around. They worked in a hospital where every nurse and doctor did nothing but try to help. And sometimes that carried a personal risk. Like Sharon’s situation for instance.

Sharon had known Christy Pierce and her family for years because that’s how long Christy has been ill. However, a donor had finally been found after ten years and the hospital didn’t want to allow her transplant because her brother had raised money to send the donor and the donor’s family on vacation. And as it turns out that’s illegal because it puts a monetary value on the bone marrow.

And so Sharon had been told to deny Christy the bone marrow but luckily Sharon had chosen to give it to the teenager anyways.

She had told the doctor on Christy’s case that she would take the fall. And she had prepared to be at best fired or worst sued. Yet the hospital chose to overlook Sharon’s indiscretion because they realized that firing a woman for giving a teenager the bone marrow she needed would just be bad PR.