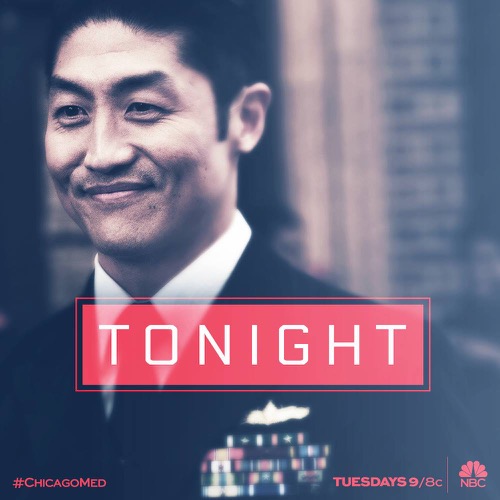 Tonight on NBC their new medical drama Chicago Med returns with an all new Tuesday February 2, season 1 episode 8 called, “Reunion,” and we have your recap below. On tonight’s episode Dr. Manning (Torrey DeVitto) returns from maternity leave and treats a teen with a history of medical issues.

On the last episode, Sharon Goodwin put her job on the line for a patient in need of a lifesaving bone-marrow transplant. Meanwhile, April cared for a homeless man; Dr. Manning’s parents arrived; and a couple were injured during their first date by a hit-and-run driver. Did you watch the last episode? If you missed it, we have a full and detailed recap right here for you.

On tonight’s episode as per the NBC synopsis, “Dr. Manning returns from maternity leave and treats a teen with a history of medical issues. Meanwhile, Dr. Choi cares for a former Navy shipmate; a Saudi prince arrives for a surgical procedure, but only from a hotshot surgeon; and a romance blooms between Sarah and a lab tech.”

Tonight’s season 1 episode 8 is going to be exciting. We’ll be blogging it right here for you. In the meantime hit up the comments section and tell us your thoughts on this new show and enjoy a sneak peek of tonight’s episode below for your enjoyment!

A young teenager girl had been brought into the hospital on tonight’s episode of “Chicago Med” after she complained about being unable breathing. However, there was just something about her case that rubbed Nat the wrong. Nat who was fresh from maternity leave had been the first to treat Michelle and what seemed to amaze her was how quick the young girl recovered once her father left her side.

So Nat had been left confused by the girl’s fast recovery and as it turns out she wasn’t the only one. April had been there as well and she said that she had never seen anyone recover that fast. And so Nat wanted to do a full work up before she discharged Michelle.

Though lucky for her, the girl’s father had all of his daughter’s medical records just waiting outside in his car. He said his daughter had been suffering from mito since her mom passed away two years ago. So he keeps all of her records with him because they tend to be in hospitals a lot.

Only Michelle hadn’t been diagnosed with mito by a doctor. It had in fact been her father that had diagnosed her because he said all the doctors couldn’t figure what was wrong with her even though she had been suffering. Therefore, he had looked up her symptoms online and had come up with his own diagnosis.

But Will wanted to double check the whole mito thing. He had told Nat that they should run a biopsy seeing as that was the only possibly way to discover whether or not Michelle had mito. And she had agreed with him.

Both Nat and Will had read through all of Michelle’s files and the girl was far too many drugs. So there was a chance that Michelle was simply reacting from a certain drug in her system that was supposed to help her mito but was in reality making her sicker. And so Will had suggested to Michelle’s father that they run a biopsy just to cross everything mito off.

And the man had in turn freaked out on him. He said his daughter had mito and he was so convinced that he didn’t want to bother with a biopsy. Which was worrying because both Will and Daniel who happened to be nearby had gotten a certain vibe from the father. They feel that his identity was so wrapped up in being the loving father to a sick child that he was refusing to face the future as anything else.

Yet Nat hadn’t wanted to throw the words “child abuse” around. So the doctors and Sharon had agreed to delve in a little deeper into Michelle’s case before calling social service. And that’s why Daniel was going to conduct a session with Michelle.

Although Sharon could have done with the hassle. It seems the hospital had a red carpet kind of patient. A young Saudi prince needed surgery and he flew halfway around the world in order to be treated by the famous Dr. Downey.

Only Downey was unconventional to say the least. He had been going about the hospital with his Hawaiian t-shirts on when he just crashed Connor’s surgery with no explanation whatsoever. So Connor had found it odd when all of sudden Downey asked for him to assist.

Downey hadn’t needed Connor as a translator with the prince and if anything Connor had been brought in to help make Downey’s tea. And so eventually Connor had gotten fed up. He left Downey to do whatever he was doing and he went back to the emergency room.

Where he ran into Ethan’s friend and patient. Ethan had been treating his good friend Chief Petty Officer Mason when he found out that Mason has been seeing blood in his stool for the past three months. So he asked him why he hadn’t gotten checked out before and it turns out he had gone to another doctor. Though that had been the doctor at the VA hospital.

A Dr. Glass who later admitted to Ethan that she had tried to get Mason to have the test done but the hospital was understaffed and overbudget as it is. And Mason was just another person to fall through the cracks. Which was not what Ethan wanted to hear but his friend desperately needed surgery so he had to rush back to the hospital.

And fortunately Mason had made it through his surgery. Connor had gone in and had stopped Mason from further hemorrhaging out and so that means Mason will live to see his old naval crew at their upcoming reunion. Though Ethan later had to take him to the event by wheelchair and there he wasn’t so angry with Dr. Glass.

But as for Michelle and her father, the hospital had decided to call social services when it didn’t look like anything else besides her dad was making Michelle sick. So Daniel ended up having a one on one with Mr. Joffe and he got the other man to see that sometimes we aren’t always aware of things we give off. And so Mr. Joffe finally stopped yelling at the hospital staff for kidnapping his child and ultimately agreed to see Michelle with a doctor always present in the room.

And while it may not be official just yet, Sarah and that lab tech of hers are no longer taking things slow.