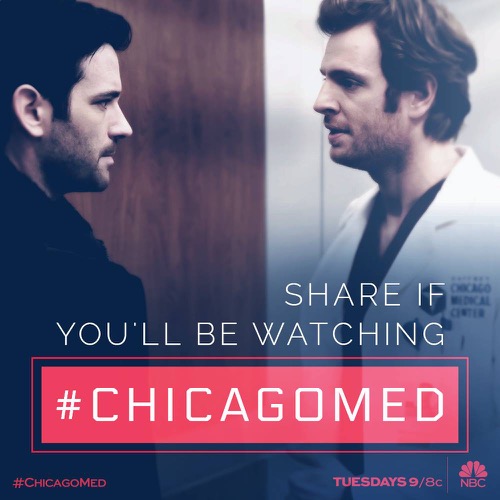 Tonight on NBC their new medical drama Chicago Med returns with an all new Tuesday March 29, season 1 episode 12 called, “Guilty,” and we have your recap below. On tonight’s episode, Nurse Lockwood (Marlyne Barrett) gets arrested when she takes a stand. Meanwhile, Dr. Halstead (Nick Gehlfuss) deals with a pending lawsuit against him.

On the last episode, Dr. Rhodes and Dr. Choi clashed over the final decision made by a dying patient. Meanwhile, a pending lawsuit against Dr. Halstead moved forward, and doctors raced to save a patient with a misdiagnosed flesh-eating bacterial disease. Did you watch the last episode? If you missed it, we have a full and detailed recap right here for you.

On tonight’s episode as per the NBC synopsis, “Nurse Lockwood gets arrested when she takes a stand. Meanwhile, Dr. Halstead deals with a pending lawsuit against him; a baby’s injuries come into question; Dr. Charles faces personal issues; and suspicions rise about a patient who was hit by a car.”

Tonight’s season 1 episode 12 is going to be exciting. We’ll be blogging it right here for you. In the meantime hit up the comments section and tell us your thoughts on this new show.

Nurse Maggie Lockwood had decided to take a stand against the police on tonight’s episode of “Chicago Med”. Apparently the hospital had been overrun with people struck by the flu when a young man was brought in after crashing his car into a house. So the nurse on the floor which was Maggie had assigned him to a doctor and therefore it was the doctor’s call to immediately take the patient to the OR, but the patrol officer that was lying in wait had said if not demanded that she was going to be needing a blood test before the teenager was taken away.

So Maggie had to make a judgement call and she chose to follow hospital policy. She asked the patient if he was willing to consent to a blood test and, when he said no, she told the police officer that there was nothing the hospital could do. However, the officer and her partner had been following the clearly drunk teenager so they had seen how he gone eighty miles per hour in a twenty-five zone. And they had seen how he nearly killed an entirely family just to escape arrest.

And so the officer at the hospital hadn’t exactly cared about hospital policy. Or that the hospital could be opening themselves up to litigation if they purposely went against their patient’s direct order. So all the officer saw, especially at that time sensitive moment, was that some kid was going to get off and Maggie was going to help him do it. Yet, arresting Maggie for simply doing her job was a step too far.

Though, thankfully, Sharon thought the same. Sharon had later been infuriated to learn Chicago PD had arrested one of her nurses, but she was disappointed to find out that not even Voight could help her get the charges dismissed. He said that Maggie had technically obstructed an investigation and he agreed with his fellow officers that said Maggie wouldn’t be able to post bail until she was properly arraigned. Which hadn’t felt right with either Sharon or Maggie yet there was nothing they could do about it.

Only Maggie’s case wasn’t the only tricky situation that Sharon found herself handling. A baby girl had been brought in and it had been clear to Natalie that child had been suffering from retinal hemorrhage as if she hit her head. Yet the child’s mother had said that hadn’t happened. So Natalie ordered a full work up and the results that came back were all conclusive for one thing. Shaken Baby Syndrome!

So before Sharon had to make a call to child services, she had asked Natalie if the injuries could have meant anything else and Natalie had said no. Although Natalie was eventually proven to be a little too quick to judgment on this particular case. She had met the mother who was young and trying to raise a child alone, but she had also judged this other woman for not knowing who the child’s father was and going outside for a cigarette break.

And so Natalie who was a relatively new mother herself had judged someone’s else parenting. But, despite the child’s diagnosis, the baby hadn’t been shaken by her mother. She had merely been experiencing delayed reaction to an injury she suffered in utero meaning while she was still in her mother’s stomach. So her mother wasn’t abusive though Natalie had failed to wait for all of baby Grace’s document and thus she hadn’t known that the baby’s mother was in a car accident when she was six months pregnant.

However, the baby’s mother didn’t care about an apology. She just wanted Natalie off of her child’s case and she had wanted to see her child right away. Which for a short time had been denied to her because the hospital had thought she was unsafe. And so, with her treatment being as it was, the woman had wanted to take her child to someone else’s although Grace’s condition had go on to suffer a setback.

Grace’s initial condition following her mother’s car accident had been untreated for so long that she had began to suffer seizures that she might have for her whole life and these seizures would mean that she would begin opening up old ruptures after each, that would mimic shaken baby syndrome, as well as be at risk for going into distress. So both Grace and her mother had a long road ahead of them. But Natalie had saved the child’s life so hopefully that’s what will resonate with the child’s mother in the coming days.

Yet, that had been a close call for Natalie and the hospital. Sharon had to first call and then get DCFS to desist with their investigation into Grace and her mother. So that entire misunderstanding would have ended up making everyone involved looked bad however that situation hadn’t ended with detainment while Daniel had surprised Sharon by issuing a psych hold on someone else.

Dr. Charles had just been nearby while newbie Sara Reese was talking to her patient and apparently he noticed something off about Kevin Dietrich. Kevin had come into the hospital because of he claimed he had been clipped by a passing car yet Daniel will later say that Kevin had been trying too hard in downplaying his symptoms. The man was seriously injured, but he wanted Sarah to discharge right away and he kept on giving an overly detailed description of what happened to him.

So Daniel had ultimately put Kevin on a psychiatric hold because he had been worried that the man would try to hurt himself again the second he was given a chance. Though Kevin threw out the words “lawsuit” and having Daniel’s license revoked. And therefore it hadn’t been a laughing matter when Kevin was kindly escorted to his new room.

But Daniel didn’t seem as if he was usual self with that patient. He kept finding excuses not to question Kevin again and it was almost as if he was hiding in his room. So, who hadn’t known that Daniel had gone off his own medication, Sarah had basically hounded him until he was ready to go back out and do his job. Which was to help Kevin realize that his depression doesn’t have to be some dark secret.

And Kevin had been depressed. Only he had tried hiding it because he supposedly has this great life with a sighing paying job and a beautiful wife. So Kevin hadn’t felt like he should be depressed nor that he deserved to label himself that way, but he was and he was finally taking the steps to correct that once he admitted it out loud.

So the hospital had truly been fortunate to escape several potential lawsuits though thankfully Sharon hadn’t been informed about the near miss involving Dr. Will Halstead. Will was currently going through the lawsuit that Jennifer Blake had filed against him and the hospital yet he had heard that Jennifer wasn’t doing so well. And so that’s when he got Connor’s help with looking up her file.

Connor had been in a mood that day he had offered to lend Will his access code only Connor thought that it was going to end there. He had expected that Will’s friend would come to him later asking for help in stopping Will because Will was about to ignore the restraining order in order to go see Jennifer again. Jennifer was apparently in the placebo group for her latest drug trial and so Will who had once ignored her DNR, had felt responsible about her dying anyways.

Though he never got the chance to warn her about the trial. Connor had been quick to stop him and if that wasn’t enough he had also been the one to pick up Maggie from jail. Although he had done that latter part because he had felt guilty about what happened to Maggie. He had been the affluent teen’s doctor and so it had been judgment call to take the teenager straight to OR, but Connor also said something strange. He said he firmly believed that “the system” was rigged.

He, like the teenager, had found himself in trouble when he was young yet his rich dad had helped him get off while his poorer friend hadn’t gotten so lucky. And later that friend died before Connor could make amends. So Connor wasn’t really a believer in the system much less in the police always getting it right.