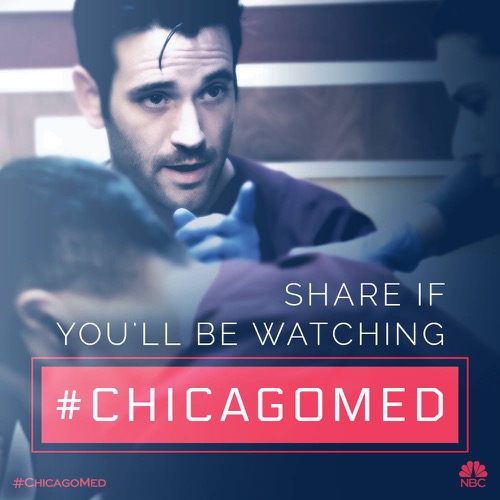 Tonight on NBC their new medical drama Chicago Med returns with an all new Tuesday February 23, season 1 episode 11 called, “Intervention,” and we have your recap below. On tonight’s episode Dr. Rhodes (Colin Donnell) and Dr. Choi (Brian Tee) clash over the final decision made by a dying patient.

On the last episode, a 9/11 hero was treated, but an unforeseen medical problem arised. Meanwhile, Sarah contemplated which hospital to select for her residency; Dr. Choi cared for an injured teen hockey player with a demanding father; and Halstead and Manning clash. Did you watch the last episode? If you missed it, we have a full and detailed recap right here for you.

On tonight’s episode as per the NBC synopsis, “Dr. Rhodes and Dr. Choi clash over the final decision made by a dying patient. Meanwhile, a pending lawsuit against Dr. Halstead moves forward, and doctors race to save a patient with a misdiagnosed flesh-eating bacterial disease.”

Tonight’s season 1 episode 11 is going to be exciting. We’ll be blogging it right here for you. In the meantime hit up the comments section and tell us your thoughts on this new show and enjoy a sneak peek of tonight’s episode below for your enjoyment!

Tonight’s episode of Chicago Med kicks off with Will in Goodwin’s office meeting with her, Jennifer Baker and the lawyers. The hospital can’t afford the settlement that Will’s former patient is asking for. Will tries to talk to Ms. Baker, and apologize for recessitating her against her wishes – but Goodwin won’t let him speak, she is trying to keep things from getting worse.

In the emergency room, a man is brought in – he was found unresponsive lying on his kitchen floor. The patient is semi awake and keeps asking Connor what is happening to him. They manage to get him stable and Reese cuts the man’s shirt off from him. His entire body is covered is huge red blisters/lumps. Connor says to get him up to the operating room ASAP, but he has a feeling that they are too late.

Will bumps in to Zoe in the waiting room. He asks her to do a huge favor for him – and check in to Jennifer Baker’s case study and see if she has made any improvements. If Jennifer is getting better, then there is no reason she should be so upset about him saving her. Zoe agrees to look in to it.

Natalie heads in to an exam room to check in on the next patient. A little girl named Shiloh has been brought in with a headache and high fever. Natalie and Will talk to her parents, and think that she might have meningitis – they order tests.

Dr. Choi rushes to greet another patient out of the ambulance – Mr. Gallagher has extreme abdominal pain, also has an LVAD (a device attached to his stomach for his heart). He explains to Choi that he has severe ulcers, and has had them ever since he got the LVAD. Dr. Choi says they have to scope his stomach to see how bad the ulcer is, and he will have someone from cardiology come look at his LVAD.

Charles bumps in to his old friend Ron Unger in the waiting room – he is there to see one of his patients, he was brought in with necrotizing fasciitis, he is the man that is upstairs being operated on by Connor. Apparently the disease is a rare flesh eating skin infection caused by bacteria.

Natalie gets back Shiloh’s test results and orders the nurses to get her isolated from the other patients, call the CDC, and get her parents tested ASAP. Natalie explains to her parents that Shiloh has Hamaephilus Influenza B, if they caught it early – they might be able to treat it with antibiotics, however the side effects could be severe like hearing loss. Shiloh’s parents reveal that she never got her shots – none of their children are immunized. Natalie and Will pressure them to get immunized but the parents refuse.

Reese checks in with Elias – the patient with flesh eating bacteria – he is out of surgery, but not awake. Elias’s fiancé explains to Reese that he had a pimple on his arm and it hurt, Dr. Unger told him that it was nothing to worry about. That was two days ago, and apparently they should have been worried.

Will catches up with Zoe and she reports that Jennifer Baker is responding amazingly to the case study – she hasn’t been experiencing any nausea or fatigue, and is doing as well as they could expect. Meanwhile, Reese corners April and asks her about Dr. Unger. April confesses that this isn’t the first diagnosis that he has missed, she has seen some of his other patients in the emergency room. April gives Reese a copy of Unger’s patients – and tells Reese to keep her name out of it and not to tell anyone where she got the list.

There is a code blue in the ER – it’s Mr. Gallagher, Dr. Choi and Connor rush in to the room and he doesn’t have a pulse. Dr. Choi realizes that Mr. Gallgher took the batteries out of his LVAD. Earlier he had begged Dr. Choi to remove the LVAD, but Choi explained that the hospital wouldn’t do that because it would kill him. Apparently, Gallagher would rather die than deal with the stomach ulcers caused by the LVAD. Choi and his team put the batteries back in and get Gallgher’s vitals back. They are sending him upstairs to be under suicide watch.

Reese meets with Goodwin and Dr. Charles – she goes over four different cases in the past two months that have showed up in the ER that Dr. Unger botches in his private practice. Dr. Charles is shocked, he went to school with Unger and he is his private doctor. Goodwin warns him that she is opening a formal case against Unger – she just doesn’t want Charles to be blind-sided.

Connor visits Downey and tells him about Mr. Gallagher and his LVAD. Downey tells Connor that it is legal and ethical to remove the LVAD – as long as the patient fully understands that he will die. And, seeing as how the odds of him getting a heart transplant before he dies of other causes are slim to none – Downey thinks that removing it is the humane thing to do. Connor scrubs up and heads to surgery to remove Gallagher’s LVAD. Dr. Choi barges in and tries to stop Connor – he shouts that what he is doing is wrong, and it’s basically assisted suicide.

There is another code blue in the ER, it’s Elias – the patient with the flesh eating skin infection – Dr. Unger is in the room at the time and he and Dr. Reese give him CPR and try to save him, however they aren’t able to. Elias’s fiancé Jim is a wheeping mess when Reese declares his time of dead, and he blames Unger for his death.

Will and Natalie head to Shiloh’s school to hand out booster shots to ensure that the disease doesn’t spread. When they are at school one of the teachers passes out – her airway is blocked, she caught the disease from Shiloh. Natalie panics and tries to give her mouth to mouth, but it doesn’t work. She and Will perform emergency surgery in the classroom and scissors and a magic marker and cut a hole in the teacher’s throat so that she can breathe until the ambulance arrives. Will scolds Natalie for giving her mouth to mouth – she just opened herself up to the infection. Will is furious – he heads back to the hospital and shouts at Shiloh’s parents for risking so many lives by not getting Shiloh vaccinated.

Meanwhile upstairs, Connor has removed Gallagher’s LVAD. He and Dr. Choi sit by his bedside and wait until he flatlines, and then they shut off his machines – both doctors are obviously emotional over what just happened.

Dr. Unger is leaving the hospital and Goodwin stops him, she tells him that she is sorry and she didn’t have a choice and reported him – she takes his hospital ID from him and Unger says goodbye to Dr. Charles and leaves.

Will stops Goodwin as she is heading home, he apologizes for making such a mess out of the Baker case and being so difficult. He wishes her a Happy Anniversary – she is on her way home to celebrate with her husband.