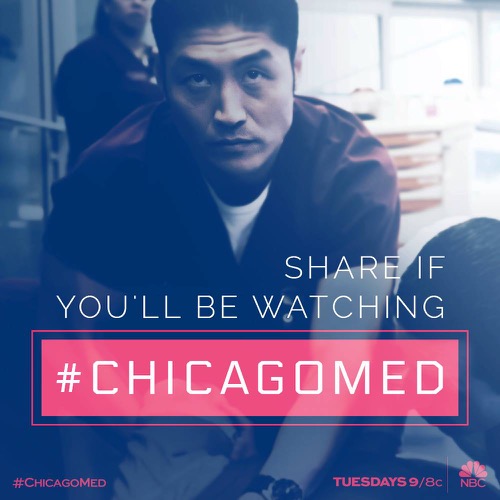 Tonight on NBC their new medical drama Chicago Med returns with an all new Tuesday April 19, season 1 episode 14 called, “Hearts,” and we have your recap below. On tonight’s episode an erratic patient arrives, claiming that his heart is pounding inside his head as he takes drastic measures to stop it.

On the last episode, a husband made a request following his wife’s death; Dr. Charles tried to reason with a patient who wanted to remove his own arm from his body; a child arrived at the hospital after swallowing magnets; Sarah had last-minute thoughts about her residency. Did you watch the last episode? If you missed it, we have a full and detailed recap right here for you.

On tonight’s episode as per the NBC synopsis, “an erratic patient arrives, claiming that his heart is pounding inside his head as he takes drastic measures to stop it. Also, Dr. Manning helps a boy with a broken wrist, but she suspects deeper issues exist; Dr. Rhodes impresses with his skills; and Will receives news about a lawsuit.”

Tonight’s season 1 episode 14 is going to be exciting. We’ll be blogging it right here for you.

Tonight’s episode of Chicago Med kicks off with Dr. Ethan Choi up in the middle of the night staring out the window – he can’t sleep, his girlfriend tries to get him to come back to bed. Ethan confesses that he has been therapy, but it obviously hasn’t been working because he still can’t sleep. He announces he is going for a run and heads outside at 1:00 in the morning.

At the emergency room, a crazy man named Coleman is yelling at the receptionist because he wants to see a doctor. He screams that his head is beating in his skull and runs past the nurses’ station and tries to get in to an exam room. The nurse tries to walk him back to the waiting room but Coleman freaks out and grabs a pencil and stabs it in to his ear so that the doctors have no choice but to see him.

Dr. Choi gets Coleman on a bed and tells April to get him some morphine. Dr. Charles comes to the rescue to try and assess the situation, he notices that Coleman is wearing 6 shirts. He explains that he has to in order to try ad muffle the sound of his heart beating.

Natalie heads in to an exam room, she meets a little boy named Bo with a broken wrist that fell off his hover board. She notices that his mom Mrs. Taylor has a bandage on her hand too – she says that she burnt her hand in the kitchen. Meanwhile, April is in the waiting room flirting with Eric’s dad (the kid that swallowed a magnet and is still apparently in the hospital).

Dr. Choi manages to remove the pencil from Coleman’s year. He pacifies him and listens to his heart beat – but its perfectly fine. Coleman reveals that he was in the war too like Dr. Choi, he clearly has PTSD too. Choi discovers that his back is covered in scars from a bombing.

Natalie runs in to Will in the waiting room – she congratulates him on Mr. Baker dropping the lawsuit. He doesn’t seem too thrilled about it. Reese receives a visit from Joey – he has brought her a present congratulating her on getting assigned to the pathology department.

Reese heads in to an exam room with Will, a gymnastics teacher named Mr. Kellogg fell at class. He needs a doctor’s note so he can go back to work. While Reese is examining Kellogg, she gets dizzy and passes out on her patient’s lap.

Natalie gets back Bo’s ex-rays and she is concerned, it looks like he broke his wrist before and it healed. Bo’s dad says that he fell down the stairs and they thought it was just a sprain, something fishy is going on. Natalie doesn’t have time to ask any more questions though, Bo’s hand is ice cold and he is losing circulation – she rushes him to the emergency room.

Will checks out Reese when she comes to – and everything seems to be fine. He asks her about her personal life to see how stressed she is, Reese insists that everything is perfect, it was probably just her blood sugar. Will orders a few tests anyways.

Natalie pays Goodwin a visit after Bo’s surgery, she tells her that she thinks she may have an abuse case on her hands. Goodwin says they should get a second opinion, Natalie heads back in to the room with Dr. Charles. Charles tries to talk to Bo’s brother Griffin, but Mr. Taylor freaks out. He tells Natalie and Charles that he didn’t lay a wife on his son or his wife – and they can call the police on him if they want to because he is innocent.

Joey shows up at the emergency room, he starts asking Reese what is wrong with her. He works down in the lab and got the test results that Will ordered. Reese snaps at him and tells him that he is being unprofessional, it is none of his business, it is just his job to run the tests and send them back.

Dr. Choi makes a startling discovery in Coleman’s room. It turns out that he wants crazy after all, and he really does hear his heart pounding in his head. Dr. Choi gets a chest scan done and realizes that the shrapnel from the bombing created scar tissue that is acting as an echo chamber and making his heartbeat echo in his ears and throat. Coleman is thrilled that he is not crazy after all. But, Choi has bad news – there is nothing that they can do to make it stop.

Charles tells Goodwin to go ahead and call the Department of Children Services. Meanwhile, Bo’s brother Griffin is weirdly infactuated by all of the bloody patients coming in and out of the emergency room.
A trauma patient is rushed in – a girl named Skyler was just in a car accident. Rhodes is on the case, they think she just had a broken leg – but then Skyler passes out and her blood pressure drops, they do a scan and see that she has internal bleeding. Meanwhile, Bo’s brother Griffin stands in the doorway and watches the doctors frantically working on Skyler.

After they rush her to the OR, Griffin kneels down on the floor and sniffs her blood and picks something up and puts it in his pocket. Dr. Charles sees the whole thing, Griffin explains that he was just picking up a button so he can give it back to the lady that was hurt. He tells a shocked Dr. Charles that he wants to be a doctor when he grows up so that he can use the knives. Griffin’s mom finds them talking and rushes Griffin away.

Dr. Rhodes gets to work trying to figure out the internal bleeding, Skyler wakes up in the middle of surgery and grabs his hand and gasps and looks him in his eyes – and then she passes away. He is obviously upset he just lost his patient.

Dr Charles has a meeting with Goodwin and Natalie, he explains to them that Mr. Taylor isn’t abusing his kids or his wife – he has diagnosed Griffin as a sociopath and he thinks that his parents are trying to cover it up. Dr. Charles and Natalie sit down with the Taylor’s. Mrs. Taylor insists that Griffin is just a little boy. Dr. Charles wants them to get Griffin tested and get him in to therapy before he has to be removed from their home by Child Protective Services.

While Dr. Charles is arguing with the Taylor’s, they realize that Griffin has disappeared. They find him in Bo’s room, sitting next to his bed and drawing a picture while the alarms on his brother’s monitor is going off. His heart rate is through the roof. They drag Griffin out of the room kicking and screaming and Bo stabilizes. Mrs. Taylor reluctantly agrees to let Dr. Charles help them.

Reese corners Joey outside – she asks him if he will still like her if she stays in the emergency room and doesn’t go to pathology. Joey laughs, and says that he doesn’t care which department she works in.

The Taylors meet with Child Protective Services, and they refuse to let them take Griffin away. They are taking him home with them. Dr Charles tells Natalie that there is no way this is going to end well.

Reese runs inside and tells Goodwin that she wants to change her match from pathology to the emergency room. Goodwin tells her that it is a legally binding contract – and she can’t just change her mind now. She is stuck with pathology.

Natalie corners Mrs. Taylor in the elevator and tries to change her mind about taking Griffin home, but Mrs. Taylor is delusional and insists that it is just a phase and everything will be fine. Dr. Rhodes leaves the hospital and walks past Skyler’s hysterical mother – she’s sobbing over her daughter’s death. Rhodes gets in to his car and then begins sobbing himself.

Tonight’s episode ends with April out on a date with Eric’s dad, he rushes out of the bar so that he can get back to the hospital and be with his son. April reassures him that their first date was perfect and she loved it.