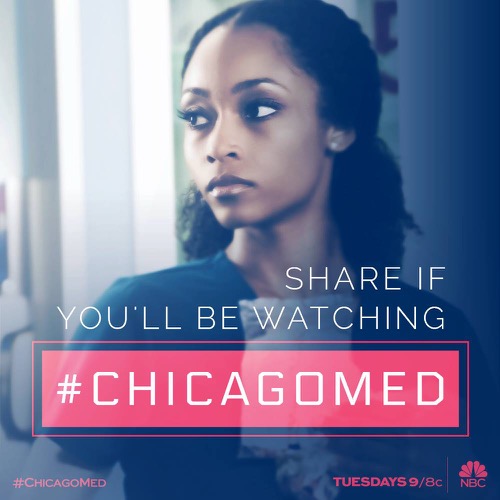 Tonight on NBC their new medical drama Chicago Med returns with an all new Tuesday April 26, season 1 episode 15 called, “Inheritance,” and we have your recap below. On tonight’s episode a teen patient with abdominal pain firmly refuses any drugs.

On the last episode, an erratic patient arrived, claiming that his heart was pounding inside his head as he took drastic measures to stop it. Also, Dr. Manning helped a boy with a broken wrist, but she suspected deeper issued exist; Dr. Rhodes impressed with his skills; and Will received news about a lawsuit. Did you watch the last episode? If you missed it, we have a full and detailed recap right here for you.

On tonight’s episode as per the NBC synopsis, “a teen patient with abdominal pain firmly refuses any drugs. Meanwhile, Dr. Halstead reconnects with his past when treating a patient; a pregnant woman does everything in her power not to deliver the child; and Dr. Rhodes tries to avoid family issues.”

Tonight’s season 1 episode 15 is going to be exciting. We’ll be blogging it right here for you.

April was in for a shock on tonight’s episode of “Chicago Med”. Apparently she had always thought her brother was a good man and a good doctor however it seems she shouldn’t have been so quick to dismiss what her old friend Severide had to say about Noah. Noah had gotten through med school with his sister’s help and he was barely surviving his residency program yet April thought he would still make a great doctor. One day, that is. And she hadn’t had any misgivings about that until she saw him cross a line.

April saw her brother act as a concierge doctor to her boyfriend and his friends. Although most medical professionals didn’t even consider concierge doctors to be real doctors because they basically gave their clients/ patients whatever they may want. Even if it may be illegal. So their focus hadn’t been on what’s best for the patient, but on the paycheck they would receive as they were walking out the door.

So rather than stick around and watch her brother do something she believes was unethical as well as illegal (he was not technically a doctor seeing as he was still in training), April decided to go back to the hospital and she may have also picked up an additional shirt to keep her busy. Yet, April and Natalie later treated a teenage patient that honestly stumped them. Ellie Newman was sixteen years old and she had been trying on her prom outfit when she began throwing up. And so her father though it was best to bring her in.

However, Ellie’s father ended up standing in the way of Ellie actually receiving treatment. Ellie knew she was sick and she wanted to get better yet she didn’t want take any drugs for the pain. Or for the vomiting. Ellie said that she would like to know what was wrong without taking drugs. Which the doctors thought was illogical. So her father showed the team treating Ellie his marks on his arm from his drug addiction and that helped explain why Ellie refused to accept any drug in her system.

Ellie had been worried about turning into her father. Who would later leave the hospital to get high because he couldn’t deal with her being in pain. So Natalie had to go against her patient’s wishes and she eventually got Ellie’s father’s consent to sedate Ellie against her wishes. And so the doctors were eventually able to run the necessary tests on Ellie, but Natalie hadn’t liked the way they had to go about it.

Usually doctors preferred to act with the patient’s consent though sometimes they had to or at least they felt like they had to bend the rules.

Much like Will had done some months back with his patient that had a standing DNR, Ethan came to the conclusion that his patient couldn’t be trusted to look after her own well-being. A pregnant woman had come in experiencing complications and so Ethan advised her to deliver the baby. Though Ms. Desai knew that she couldn’t have the baby before its due date. So she explained her situation Ethan.

The young woman was a surrogate mother and she had signed a detailed contract that said she wouldn’t get any of the money that would keep her and her two sons out of the homeless shelter if she gave birth to a premature baby. So Desai was willing to risk dying in order to keep her paycheck. But thankfully Ethan had asked Natalie to speak with his patient as a mother so the two were able to convince Desai to later have the baby early.

Only the parents didn’t want it. In fact, they were cutting all ties with their biological child so they weren’t going to pay Ms. Desai for giving birth to four pound child that turned out to be perfectly healthy despite the early birth. So the surrogacy agency had said that they would someone willing to adopt the child – for a fee that is – and that Ms. Desai could still probably walk away with something. However, Sharon had bad feeling about that surrogacy agency. She felt like their human traffickers with a better title because no one else would have made Ms. Desai a contract that somehow the baby her responsibility.

Yet, the baby and Ms. Desai were both saved because of Ethan’s refusal to give up on them. So sometimes isn’t always right and Natalie figured that out too. She and Daniel had monitored Ellie’s case and it turns out she suffered from a disease which needed to be monitored by opiates as well as carbohydrates. Otherwise it caused its victims to suffer from a great amount of bowel pain.

And how Daniel was able to figure that out was by asking Ellie’s father a few questions. Ellie’s father had apparently suffered like she had and no one could figure it out back then. So that’s when he began to self-medicate and an explanation of what happened went along towards Ellie understanding her father. It seems she always knew he was addict, but with her new experience she now feels like she gets why he became the way he was and why turning drugs had seemingly felt easier for him to do.

Connor though had watched Ellie and her father get closer. So he eventually talked to his own father and they appeared to have reached an understanding as well. That means that while they probably won’t be going on any father/son trips anytime soon, he could and would respect the fact his sister has a better relationship with their father they he did. And that he would stop trying to distort her view of him to her.

Apparently she hadn’t liked being corrected in front of the patient’s brother or be told that she was in the wrong.