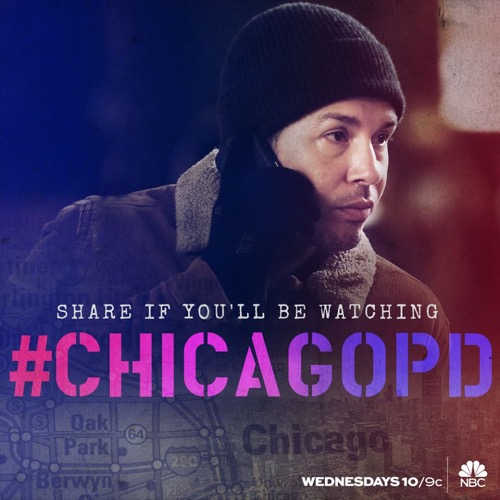 Tonight on NBC their riveting police drama Chicago PD continues with an all new Wednesday January 20, season 3 episode 12 called, “Looking Out for Stateville” and we have your weekly recap below. On tonight’s episode, Voight (Jason Beghe) arranges for his former cellmate, Eddie Little, (Clancy Brown) to be a CI in an effort to bring down a major cocaine supplier.

For those of you who don’t know, Chicago P.D. follows the Chicago Police Department uniformed cops who patrol the beat and go head-to-head with the city’s street crimes and the detectives of the Intelligence Unit that combats the city’s major offenses, including organized crime, drug trafficking and high-profile murders

On the last episode, a burglary-sexual assault at a luxury condo was investigated; and Lindsay, Halstead, Atwater and Ruzek went undercover in an attempt to catch the perpetrators. In other events, Voight tried to help a former acquaintance; and Platt and Mouch received disappointing news about their upcoming wedding. Did you watch the last episode? If you missed it, we have a full and detailed recap right here for you.

On tonight’s episode as per the NBC synopsis, “Voight arranges for his former cellmate, Eddie Little, to be a CI in an effort to bring down a major cocaine supplier; Burgess makes a major move regarding her relationship with Ruzek; and Roman develops a plan to help fund Platt and Mouch’s wedding.”

Tonight’s episode of Chicago PD kicks off with Hank in his office with a criminal informant named Little – he just got out of prison after doing time for manslaughter, he killed a mobster named Gigi DiCaro. Hank goes over the pay rate for CI’s and Little agrees to sign on with the Chicago PD.

Afterwards, Hank briefs his team on their target Rory Jenson – he has been on the Chicago PD’s radar for years. Hank introduces his team to Eddie Little and he gives them the rundown on Jenson, they have known each other since they were in juvie. Apparently, Jenson has a cocaine contact in Ireland and is smuggling coke into Chicago over the Canadian border. Their first target is a motorcycle gang named the “Lost Deciples” – they are getting a shipment of coke from Jenson later that night.

After the briefing, Hank gets called in to Crowley’s office. She knows that Little and Hank were cellmates years ago in Statesville. She wants to make sure that this isn’t just “Statesville looking out for Statesville.” Crowley tells Hank that if he doesn’t take down Jenson with Little’s intel, then he is going to have to bring Little back in and charge him.

That night they head to the club house to bust the motorcycle gang – Hank’s team is in position. They sneak in through a tunnel and once they are inside a shootout ensues. After dozens of bullets fly – Hank convinces the gang to surrender before he calls Swat. Little’s intel panned out, and they seize the drugs. They also find $40,000 in cash and Hank tells his team to “bag and tag it.”

Burgess and Roman arrive at the precinct the next morning and Trudy is on the phone arguing with a wedding venue – she wants her deposit back. Trudy puts them on lost property detail – she gives them the crates of stolen merchandise from the motorcycle gang’s clubhouse and tells them to find the rightful owners. Ruzek takes Burgess aside and tells her that he and his dad won’t make it to the dinner they planned with her and her mother. Apparently Ruzek’s dad had a “work thing” come up.

Hank looks at his badge and it is a fake – he was sent by the Disciples for ratting them out. Little got lucky, only he isn’t supposed to have a gun in the house because he is on parole. Hank helps him stage the crime scene so that it looks like his wife is the one who shot the fake FBI agent. After the police arrive, Hank has Lindsay put Little’s wife and daughter in to protective custody.

Hank and Eddie get to work on bringing down the next leg of Jensen’s organization. Little bribes an old associate in China Town for intel on the next shipment. After threatening the man’s son in prison – he gives up the info to Little. Hank and his team get suited up and head out to the next raid – they seize more cocaine and have another successful bust.

At the police station, Erin sits down with Little’s step-daughter Tracy. Tracy is upset that her mom lied and said she shot the fake FBI agent to protect Eddie. She breaks down in tears and tells Erin that Eddie is not a good guy and she doesn’t trust him. Erin offers to talk to Tracy’s mom for her – but she says it is no use, she won’t listen to anyone.

Hank sits down with Eddie in his office – basically Eddie is getting 10% of all of the money and drugs that that they seize in their raids. So far they are up to almost $40K. Eddie rants that he needs $75,000 to move to Florida. He is sick of going after the little guys – he wants to go after Jensen because he knows the percentage that he receives will be huge. Hank is hesitant, but Eddie reminds him that he owes him from something that happened in Statesville.

Hank heads out and briefs his team and announces they are going after the big guns and taking down Jensen. It’s risky – and everyone tells Hank that it is a bad idea and they are still tryin to build a case. Antonio takes Hank aside and tells him that he is on to him, and he can’t use the Chicago PD to settle an l prison debt. Hank gets emotional and tells Antonio that he was almost murdered when he was in Statesville, but Eddie saved him from being shanked and protected him. Hank tells Antonio that Edie gave him a second shot at life – and he owes him.

Little and Hank head to a bar where they have a meeting scheduled with Jensen. They have a sitdown with Jensen in the back of one of the resturants that he owns. Eddie explains to Jensen that he can get him back all 30 of the kilos that the police seized, and Hank owes Eddie his life so he promises Jensen that the police won’t come after him. Hank tells Jensen that he an have the coke back for $800,000. Jensen agrees to the terms and they set up a meeting place for the deal to go down.

The next day Hank’s team goes undercover at the horse races where Little is supposed to meet Jensen for the drug deal. While they are waiting Lindsay explains to Jay that she is worried about Tracy – she doesn’t think that she should go to Florida with her mom and Eddie.

Little sits down with Jensen and they pass each other the bags of money and coke. Hank’s team gets the entire deal on video. After the deal goes down – Hank and Eddie slip out the back door with the money. The rest of Hank’s team chases after Jensen. Jay catches him in the basement and cuffs Jensen and arrests him.

Hank and Eddie Little jump in the car – then Eddie pulls a gun on Hank and kidnaps him, telling him to drive. They arrive at the river bank in a remote location and Eddie takes Hank’s cell phone and smashes it so that no one can find them. Then he shoots out the tires on Hank’s car and makes a run for it. Eddie hops in his own truck – but Antonio is waiting for him with a gun. They knew not to trust Eddie and that he was going to pull something. Hank and Antonio arrest Eddie and handcuff him. Back at the precinct Hank tosses Eddie in to a cell. Deputy Crowley congratulates Hank on his bust. Hank tells her that he wants to give the money that Eddie made to his family, she says that they will make an exception. Lindsay gives Tracy and her mom the $80,000 – she cries because she never wanted the money, she just wanted to start over fresh in Florida with Eddie.