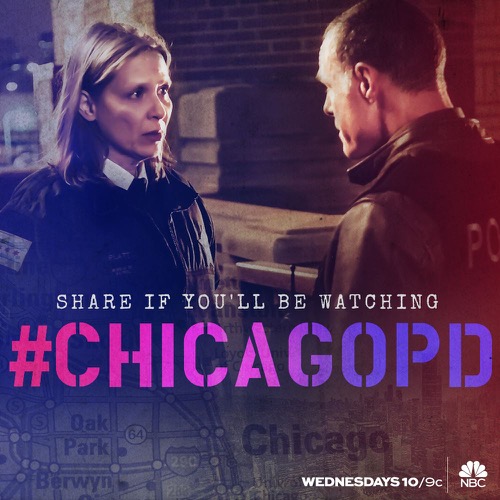 Tonight on NBC their riveting police drama Chicago PD continues with an all new Wednesday February 3, season 3 episode 13 called, “Hit Me” and we have your weekly recap below. On tonight’s episode, Lindsay (Sophia Bush_ goes undercover in order to catch a cop who’s targeting women leaving a local casino; Burgess (Marina Squerciati) plans to transfer districts; Mouse (Samuel Hunt) offers to set Ruzek (Patrick John Flueger) up with a friend.

On the last episode, Voight arranged for his former cellmate, Eddie Little, to be a CI in an effort to bring down a major cocaine supplier; Burgess made a major move regarding her relationship with Ruzek; and Roman developed a plan to help fund Platt and Mouch’s wedding. Did you watch the last episode? If you missed it, we have a full and detailed recap right here for you.

On tonight’s episode as per the NBC synopsis, “Lindsay goes undercover in order to catch a cop who’s targeting women leaving a local casino; Burgess plans to transfer districts; Mouse offers to set Ruzek up with a friend; and Antonio volunteers to take Roman’s place in a boxing match against Jimmy from Firehouse 51.”

Voight and his team had heard about a dirty cop holding up unsuspecting women not far from the nearby casino. And so they had decided to send Lindsey in as another woman that had won it big at the tables on tonight’s all new episode of “Chicago PD” but all was not what it seemed.

Lindsey had caught a young man that pulled her over and demanded money in return for letting her go yet he hadn’t been a cop. He had simply gotten the uniform and the badge from someone else in order to impersonate being a cop. And, on top of that, he wasn’t even the man that Intelligence had been looking for.

The man they caught had a partner. A man he calls “Bug” but whose real named turned out to be Clayton Howard. And it was Clayton that had attacked the complaining victim that had sent everything in motion.

The victim’s name had been Kristy Bradford. Kristy had won it big at the casinos and was on her way home when she had been pulled over by a man she assumed was a cop. He had the patrol car and the uniform so she had no reason to doubt him. But then he had demanded all of her cash and had beaten her up really badly because he felt she had been moving too slow.

And then he took her I.D. So at first Kristy had been afraid to tell anyone in case the same man that had already proved willing to hurt her came back. Yet she had a change of heart when Voight had promised to capture this guy without putting her life at risk.

So when Intelligence realized they were dealing ring after all of this, Voight reported it to his boss who in turn asked that the investigation continue on the hush, hush. Because it had been decided that no one outside their department was supposed to know they were now looking for a ring that included fake cops. You know just in case.

But that proved to be a mistake. Roman and Burgess had been sent out to find someone by the name of Clayton Howard and they had gone to the address expecting to find a perp. And so they hadn’t thought anything was wrong when they saw a “cop” leaving Clayton’s place.

And therefore, they had nearly died because they hadn’t also expected to be shot at. Though luckily they had survive the initial gunshots and had gone on to survive the car chase as well. So Roman hadn’t exactly been happy with Voight.

He felt the other man had been all too willing to risk his and Burgess’s life so he had been full of attitude.

However, Platt made him participate in the manhunt that for Clayton Howard. She said it didn’t matter that it was an Intelligence case because they were looking for someone dangerous enough to shoot at cops. And so Roman managed to do his job but just barely.

He had been upset enough what with Burgess wanting to put in her transfer papers because she didn’t want to be around her ex anymore but getting shot as well had really tipped him over. So when he and Burgess had once again been given an address – he hadn’t waited for backup. Burgess took on Clayton’s partner and Roman went after Clayton.

Therefore, it was a good thing that Platt had been nearby. She had come in time to help Roman and together they brought in Clayton. And thankfully Clayton had been more than willing to talk.

Clayton said that the whole thing hadn’t been his idea. Detective Martin Watts had apparently brought him in and had even told him how to go about impersonating a cop. So the spotter at the casino had been Watts’s guy and after Clayton had been told about a woman leaving the casino – all he had to do was get the money.

But trusting Clayton had been a mistake. He went on to blackmail Watts and had the man provided additional uniforms for his friends so they could start raking in even more money. So by time Voight and his guys found Watts – the man had been at the end of the road.

He had gone to trailer and he had been planning on killing himself because he knew that everything was bound to come out after Clayton’s arrest. So Platt who had gone through the academy with him had to be the one to talk him down. She had known Watts best and ultimately she was the only one that could get through to him.

And thanks to her, he peacefully turned himself in.

Though after everything was said and done, Platt probably helped Burgess the most. Burgess had wanted to transfer out but Platt had told Lindsey about Burgess’s situation so Lindsey had spoken with her. And Lindsey told Burgess that it was hard enough for female cops to be taken seriously – if she transfers because of a guy – it was going to follow her her whole career. So Burgess had to decide if her ex was more important than everything she has been working towards.