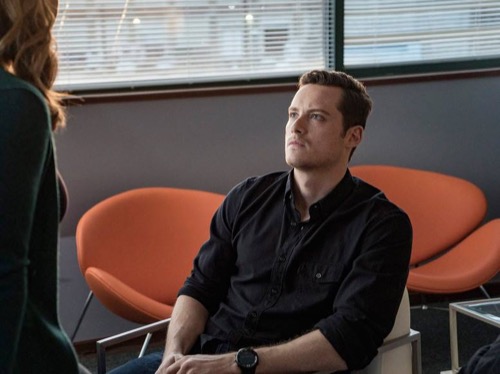 Tonight on NBC their riveting police drama Chicago PD continues with an all new Wednesday March 2, season 3 episode 17 called, “Forty-Caliber Bread Crumb” and we have your weekly recap below. On tonight’s episode, while on a bank run for his off-duty job at the dispensary, Halstead (Jesse Lee Soffer) and his co-workers becomes involved in a shootout with a violent robbery crew.

On the last episode, the execution-style murder of a young boy was investigated. The incident, which may be tied to another shooting, lead CPD officers and community members came together for a candlelight vigil. Did you watch the last episode? If you missed it, we have a full and detailed recap right here for you.

On tonight’s episode as per the NBC synopsis, “while on a bank run for his off-duty job at the dispensary, Halstead and his co-workers becomes involved in a shootout with a violent robbery crew. Later, Voight and Lindsay learn that the dispensary’s owner has faced threats from local gangs angry that she’s cut into their business; and the team follows a lead to a potential suspect.”

Tonight’s episode of Chicago PD kicks off with Jay at his side job – where he is working for a woman named Brianna, and acting as a security guard at her marijuana shop. Jay takes $263,000 cash deposit to the bank. Before he leaves Brianna invites him to dinner, he tries to explain that he is “kind of seeing someone.” She doesn’t seem to mind and says that they can keep it light.

Jay heads to the bank with another security guard named Terry – they are driving under a bridge, and a car drops right in front of them, and is on fire. They try to back up, but another car arrives and boxes them in. Men seem to come out of all directions and open fire. Jay and Terry are seriously outnumbered. The men get away with the $263,000 and Terry is shot and seriously hurt. Jay radios in for an ambulance.

Alvin and the rest of the police arrive just in time to find Jay screaming at the driver of his and Terry’s SUV – Jay is furious that while he and Terry were under attack and trying to protect the money, the driver was hiding and didn’t shoot a single shot at the robbers.

Jay heads back to the police station – Hank wants to take him off the case, Jay refuses and convinces Hank that he will need him in the investigation. They bring Brianna in for questioning. Erin and Hank give her a hard time. Brianna explains that marijuana dispensaries are not allowed to use the federal banking system, so every week she deposits a quarter of a million dollars in cash in to a safety deposit box. Out in the hallway Alvin breaks the news to Jay that Terry didn’t make it. He tries to get Jay to drop the case and use some of his vacation time, but Jay won’t listen – he just storms off.

Brianna sees Jay in the hallway, she gets emotional when she learns that Terry is dead. She offers to pay for the funeral, and takes his hand – but then Erin interrupts. She says that they need Jay – they got fingerprints back on a gun that they found at the scene, they belong to a known gangmember named Joey Ortiz. Truman and Burgess are already on the case, they have located Joey Ortic’s car and are parked outside of his house. They call in the address to Jay and the rest of the team.

Jay, Atwater, and Ruzek arrive at Joey Ortiz’s house and barge in – they find Joey and a few of his pals – they have a man tied up to a table and appear to be torturing him. Back at the police station, Ortiz insists that he is innocent, he says that someone stole his guns out of his car last week and they are setting him up.

Ortiz alibies out, so they are back at square one. Alvin thinks that it may be an inside job – he drills Jay and asks him if there was anyone else at the dispensary that knew the route for the money drop. Alvin is going to sweep the shop for bugs. Meanwhile, Jay stops by Terry’s house to check in on his pregnant wife Lissa. She gets emotional over her husband’s death – she tells Jay that Terry really looked up to him, and he had just signed up for the police academy.

Alvin and Ruzek head to the dispensary to sweep for bugs. Ruzek is upset – he says that he is sick of Roman sniffing around Burgess. Alvin doesn’t want to hear it, he reminds Ruzek that he and Burgess broke up, and he needs to decide if he is going to “chase tail or be a cop.” They find a bug that has been planted on the bottom of Brianna’s desk and linked in to her phone, and a bunch more inside the plants and lights. Al tells Brianna to stay in the office and stay calm, don’t let whoever is listening in know that they found the bugs.

Meanwhile, Al and Ruzek head outside – whoever is listening in to the dispensary has to be within a two block radius. It’s dark outside, and Ruzek finds a mysterious van. But, whoever is inside know that they have been caught and drives off before Ruzek is able to get a clear ID. The next day Ruzek and Alvin trace the bugs back to a local spy shop – and learn that Brianna’s soon-to-be ex-husband Jason Logan is the one that bought the bugs.

Erin and Jay track down Jason Logan – he says that he isn’t the one that wired Brianna’s office, it was a private investigator that he hired to get dirt on Brianna and catch her cheating. He says that the PI’s name is Frank Amerson. While Erin and Jay are bringing Logan in for holding – he recognizes Jay’s voice and tells Erin that he and Brianna were “talking about screwing.”

Hank decides to spy on the personal investigator that was spying on Brianna – he has Mouse tap Amerson’s phones. Mouse and Jay are listening in, and sure enough Frank gets a phone call from another guy about “getting his cut” for the dispensary. They bring Frank in for questioning but he tries to lawyer up. He won’t answer any of Antonio and Hank’s questions. Hank coerces him in to talking by promising him protection. Frank caves and says that he sold the info on the bugs to Colin Briggs, and Briggs promised him 20% of the cut.

Amerson calls Logan and sets up a meeting – Hank’s team sits in unmarked cards and watches from around the corner. Logan shows up and is acting strangely. He pops the trunk of his trunk and says the money is inside, then he knocks Frank out with a taser and throws him in the trunk. He is about to drive off – but Hank and his team move in and arrest him.

Back at the precinct Logan won’t talk – but they don’t need him to. They trace the car he was driving back to the rest of his team, the Seeley Brothers, known for armed robbery. Hank and his team head to the Seeley Bros. house in the middle of the night. Sure enough, they find the cash sitting out on the kitchen table. Hank and his team arrest to guys, Jay recognizes a third guy as the one that killed Terry, but he makes a run for it. Jay chases him outside and down the street and through the neighbors’ yards. Jay chases him down and tackles him in a run down building – he has an opportunity to kill him, and seriously contemplates it, but Alvin shows up and seems to snap Jay out of his revenge mission.

The next day Brianna shows up at the police station, Jay gives her back the money that he recovered – she promises to take care of anything that Terry’s wife needs. Jay quits his job as her security officer, and gives her back the keys to the dispensary. She tries to get him to go on a date with her again – but Jay turns her down and says that he is seeing someone. Tonight’s episode of Chicago PD ends with Jay and Erin at Terry’s funeral.