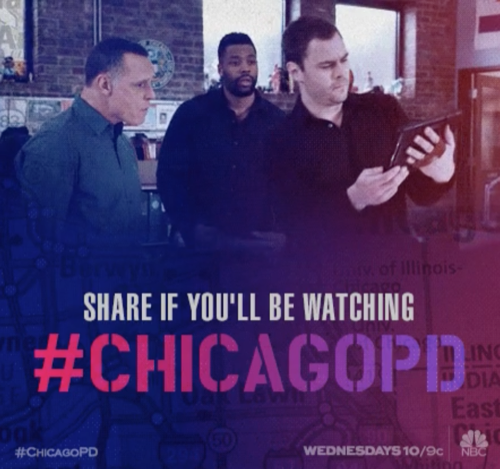 Tonight on NBC their riveting police drama Chicago PD continues with an all new Wednesday May 18, season 3 episode 22 called, “She’s Got Us” and we have your weekly recap below. On tonight’s episode, Lindsay (Sophia Bush) and Halstead (Jesse Lee Soffer) respond to a shots fired call and discover one survivor: a young girl. In other events, Antonio (Jon Seda) and Olinsky (Elias Koteas) investigate a “self help” group.

On the last episode, the team investigated when an abandoned newborn baby was found dead.  Did you watch the last episode? If you missed it, we have a full and detailed recap right here for you.

On tonight’s episode as per the NBC synopsis, “Lindsay and Halstead respond to a shots fired call and discover one survivor: a young girl. In other events, Antonio and Olinsky investigate a “self help” group; and Platt makes the case to Crowley for why Burgess and Roman should remain partners.”

Tonight’s episode of Chicago PD kicks off with Erin and Jay on call late at night – Jay’s whining about having to work the night shift. A call comes in, there were gunshots heard by a neighbor. Jay and Erin rush to the house, other patrol cars meet them there. They sweep the house and the shooter appears to be gone – it looks like a whole family was murdered. There are least 5 victims – some of them are kids. Jay and Erin find a little girl who is alive – she crawls out from underneath another dead child.

Antonio, Olinsky and the rest of the team arrive – its daylight by now. The victims are the Carlson Family. The parents are both dead, and their children – the only survivor is the little girl that Jay and Erin found. But, she is in shock and isn’t much use as a witness at the moment. Erin rides in the ambulance with her to the hospital.

At the precinct, Ruzek is putting together info on the Carlson Family. Jeni and Darren had three daughters and one son – their children went to public school. Polly is the name of the little girl that survived the shooting. Financially, the Carlson’s were “hustlers” as Atwater put it. They both had full time jobs, Darren had a couple of rental properties, and Jeni was raising money to open a fast food restaurant. There was no sign of forced entry in to the home, which means they probably knew their killer.

Erin is still sitting at the hospital and waiting for Polly to wake up. Jay tries to get Erin to go home and get some sleep, she refuses. Jay tells her that there is such a thing as too much empathy.

The coroner fills Hank in on her observations. She says that all of the kids are healthy, and they were obviously not malnourished. But, Darren was recently beaten nearly to death in the last three months, and there is no record of hi ever going to the hospital for it.

Olinsky and Antonio head to Horizons – it’s a “Leadership Committee.” According to Olinsky, it’s a cross between a ponzey scheme and wacky religion. Apparently Jeni and Darren were members of the group, and they were paying back a huge loan that they had taken from the group, plus of course a hefty interest rate. Antonio chats with Shaw the leader, he explains that Darren was paying off his debt by bringing in new members of the group. Olisnky wants names of everyone that Darren had signed up, but Shaw tells him to come back with a subpoena.

Meanwhile at the hospital, a nurse runs in to the waiting room and tells Erin that they need her ASAP. She runs down the hall and there is blood splattered on the wall. Apparently Polly woke up, grabbed a scalpel, and cut one of the nurses. Erin talks her down and convinces her to put down the knife. Then, Dr. Charles has his nurses grab Polly, restraint her, and sedate her again. Erin is furious – she shouts at Dr. Charles that she needs to talk to Polly – she is their only witness. Dr. Charles says that Polly isn’t ready to talk, she’s in shock.

Atwater and Ruzek finally get a list of the people that Dareen sold Horizon memberships to. Apparently, he really upset a guy named Allan Sloan who wanted his money back and said Horizons was a scam. They head to Allan Sloan’s house – but there is already a cop car there. Apparently someone broke in to Allan’s house the night before and took his tablet and his computer.

Meanwhile, Roman is trying to get released by the doctors so he can go back to work after the shooting. He meets with the police board and their doctors and gets bad news – the doctor says that removing the bullet will be too dangerous. So, he isn’t going to get motor skills back in his one arm. The police board tells Roman that he can’t go back on patrol – he’ll be at a desk, and he freaks out.

Atwater and Ruzek tell Hank that Allan alibi’d out. But, they have another lead. They have a security camera on the street that caught Alan’s robber. His name is Francis Kruger, and he is a security officer for Horizons. Hank and Olinsky bring Francis in for questioning, they rough him up a bit, he confesses that Horizons sent him after Allan’s computer. He insists that he didn’t kill the Carlson family though. He gives them another lead. Kruger says that Jeni took a kid named Gerald Dougherty to court – she loaned him $800 and he didn’t pay them back.

Olinsky and Atwater head to the Dougherty house, they live in the same neighborhood as the Carlson’s. Atwater finds Gerald’s dad’s gun hidden in his bedroom but Gerald is gone. His dad has no idea where he is.

Erin finds “the house on the lake,” apparently it was a rental property that her dad was working on in Hyde Park. Erin and Jay take Polly to the house. She shows them where her father was redoing the floors, then she starts sobbing and says that the man that killed her family was there at the house.

Gerald comes home and sees the cops and makes a run for it – Atwater and Antonio chase him down in an alley near by. They bring him in for questioning. Gerald insists that he didn’t do anything wrong, he confesses that he was having sex with the Carlson Family’s teenage daughter – he has photos of her naked on his computer. Gerald cries that he would never hurt Katie, he says that he loved her.

Polly says that during the winter they were at the house on the lake and the guy showed up. She says that the guy wanted money and he went outside with his dad and they had a fight. Jay calls the police station and there was a police report filed that night, but when the police arrived that night – everyone was gone. They show Polly a photo of Gerald, she says that it wasn’t him. Polly says that the killer was like 50 and drove a red pick-up truck.

They pull the street cameras and find the red pick-up truck, they are able to get a plate number – the truck is registered to a man named Lewis Carroll. They show Lewis a photo of Lewis, she confirms he was the killer. It turns out that Lewis was in jail for years for burglary – and his accomplice was Darren Carlson, but Darren got off without any prison time.

Hank and his team head to Lewis Carroll’s house, when they pull up, Lewis starts shooting at them out the window. They toss smoke bombs in through the windows and are able to take Lewis down – in the ambulance Lewis explains to Olinsky that when he got out of prison he couldn’t get a job. He went to see Darrren because he “owed him.” Apparently, Lewis wanted $20,000 and Darren gave him a Horizons pamphlet instead and it didn’t go well.

At the police station, Erin is sitting with Polly, she’s waiting for her Aunt and Uncle to come pick her up. Polly cries to Erin while they are waiting and tells her about her family’s adventures when they used to live in a van – she sobs that she misses her family. Erin comforts her, she tells Polly that she just has a feeling that everything is going to be okay for her. Polly’s Aunt and Uncle finally arrive to take her home.

Tonight’s episode ends with the bar – Dr. Charles is having drinks with Atwater, Roman, and Jay. Burgess arrives, Roman tells her that Chicago PD is pushing her out, he wants her to move to San Diego with him. He tells her that he loves her, and wants her to come with him. Burgess is speechless, he kisses her and tells her to think on it.