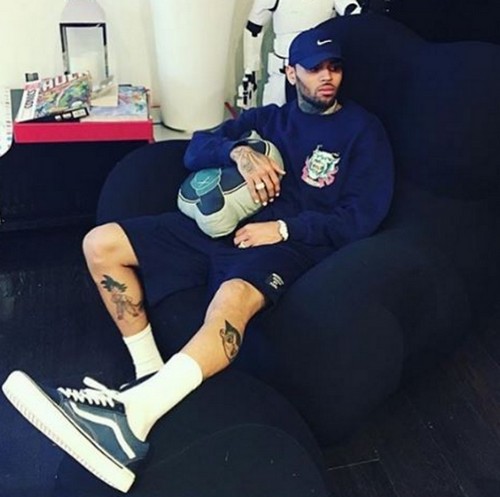 Reports that Chris Brown is dangerously thin and possibly dealing with a health crisis are circulating on the Internet. Both fans and critics want to know is Chris is okay as the controversial singer is sparking concerns after a new photo shows him looking noticeably skinnier.

According to Naughty Gossip, there’s a possibility that Chris Brown might be dealing with something very serious behind closed doors as he looks rather thin in a new promo photo, in which both his arms and torso look noticeably skinnier. The singer is looking up in the photo, and appears to be somewhat gaunt as well.

There’s also the fact that Chris has been dealing with one legal blow after another. Reports indicate that the ‘Look At Me Now’ singer allegedly ran away from being served court papers. He is being sued by his former manager Mike G, who claims the singer allegedly beat him up so bad that he ended up in the ER.

Mike G , who was hired back in 2012 to help repair Chris’ tarnished image after he physically abused ex-girlfriend Rihanna, alleges that Chris repeatedly punched him in the neck and face after a heated argument. In his defense, Chris claims that his manager stole money from him.

Chris might claim his innocence, but then again this is the same person who beat Rihanna so badly that she ended up bruised and battered in her police photo after his attack back in 2008.

So if Chris worried that he might end up in jail? Of course, no one knows what’s really going on with Chris Brown except the singer himself. Still fans can’t help but wonder if it’s supposedly if Chris is so stressed out about the case and that he might end up behind bars that he could literally be making himself sick.

That, or it could be something more serious that might be taking a toll on his health. Whatever the case is, Chris Brown is losing weight – and fast, too. Of course, sooner or later the truth will come out, as it always does with Chris Brown.

So far Chris Brown hasn’t made any comments about rumors over his health. Does Chris look too skinny to you? Do you think the singer is having some sort of health crisis? Drop us a line with your thoughts in our comments section and of course, don’t forget to check back with CDL for all the latest news and updates on Chris Brown right here!