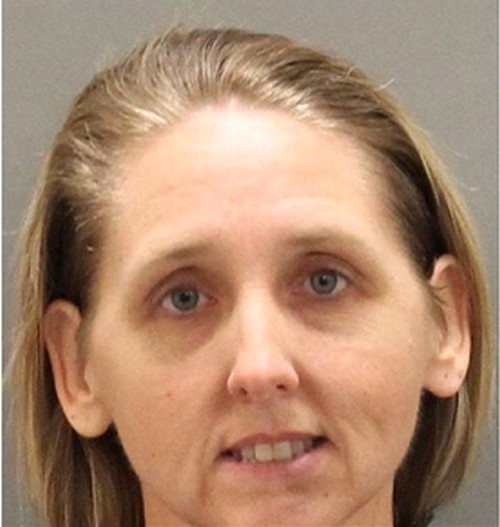 Todd Chrisley sister in law Pamela Chrisley has been arrested for extortion! Hit USA reality show Chrisley Knows Best is back tonight, March 8, for its season 4 premiere and there’s already drama brewing according to The Real Mr Housewife. Matt Richards landed an exclusive interview with Todd Chrisley, the sassy patriarch of the Chrisley clan, on an extortion scheme that rocked the family.

Todd’s brother Randy Chrisley’s soon-to-be ex-wife Pamela Chrisley has been arrested for trying to extort big bucks from Todd Chrisley and his family but her lawyer poo-pooed the charges saying the arrest was “simply a ploy to increase their ratings.”

However, the show’s ratings are better than ever and this looks like several months’ worth of law enforcement investigation in both Georgia, where Todd and his immediate family live, and in South Carolina where she lives. 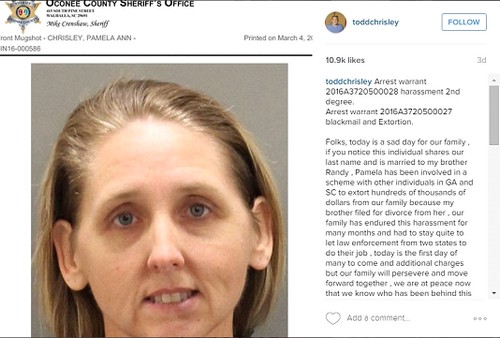 Chrisley’s sister-in-law was arrested for harassment, blackmail and extortion for allegedly threatening to tell lies about the family to tabloids. Todd Chrisley told Mr Housewife’s Matt Richards that Pamela Chrisley demanded a whopping $100,000 payday to get her out of their lives.

Todd Chrisley exclusively told Richards, “She said, ‘It’s doesn’t matter what I tell the tabloids, it doesn’t have to be the truth – the damage will be done once I tell it…it will be up to you all to prove that I lied.’”

Richards also confirmed with law enforcement that they worked the case significantly before the arrest.
This timely arrest will no doubt save the Chrisley family from a lot of off-screen drama so they can focus on the on-screen drama their legions of fans have come to expect.

The USA show has seen a major ratings growth of more than 40% and USA slated a late night talk show featuring patriarch Todd as well.

Pamela Chrisley retained a lawyer to fight the charges and was released on $11,000 bail from jail in Oconee County, South Carolina after her March 4 arrest. Her attorney Delane Rosemond said Pamela was “stunned” by the arrest and is now planning a $1 million defamation lawsuit.

It seems that not all of the Chrisleys know best. If the extortion charges against Pamela Chrisley result in a guilty verdict at a criminal trial, under South Carolina law, she could face up to a $5,000 fine plus up to 10 years in jail or any combination of these.

The harassment accusation could tack on more time and the number of counts of each she’s accused of can impact the sentence. If this is not worked out in a plea deal, there could be a hard road ahead for the ex-Mrs Chrisley.

We also wonder if any of this will play out on season 4 of Chrisley Knows Best. The new season starts at 10 pm EST on the USA Network. Wonder if Pamela Chrisley will be tuning in or not – clearly she’s not a fan of the family…