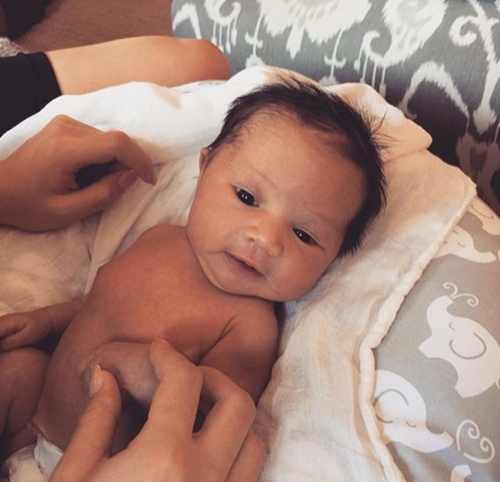 Dressed in black leggings and a black bra, Chrissy shared a pic of herself holding Luna and gently touching the baby’s head. “Hi my lulu!” captioned the photo.

Chrissy’s mom also shared a snapshot of baby Luna. The beaming grandma is cradling Luna who is wrapped in a white blanket. Vilailuck Teigen and Luna are joined by the family dog in pic which is captioned, “Lulu and me.”

Another photo of Luna popped up on both John Legend and Chrissy Teigen’s Instagram accounts. The snapshot shared by both new parents shows their beautiful baby girl who has a full head of dark hair.

Luna made her entrance into the world on Thursday, April 14. Chrissy announced the little one’s arrival with through social media. “She’s here! Luna Simone Stephens, we are so in love with you! And sleepy. Very sleepy.”

The accompanying birth announcement pic for the Instagram post shows a mama panda bear holding her cub, a rainbow with the sun at the end, tiny footprints and the message that Luna’s birth weight was 6 pounds and 11 ounces.

Chrissy and John are thrilled to share their little girl with the world. Chrissy stated before Luna’s birth that she and John would not go out of their way to hide their baby because “obviously it’s such a big part of our lives.”

To announce Chrissy’s pregnancy the couple posted a black and white photo on Instagram in October 2015. In the pregnancy announcement Chrissy legs are stretched out over John’s lap. The then soon-to-be parents shared the fantastic news with the world, saying, in part, “We’re so excited it’s finally happening. Thank you for all your love and well wishes.”

Now that baby Luna has arrived John and Chrissy are excited to start sharing photos of their happy family. We once again congratulate John Legend and Chrissy Teigen on the birth of their beautiful daughter Luna Simone Stephens whom they have already nicknamed Lulu.