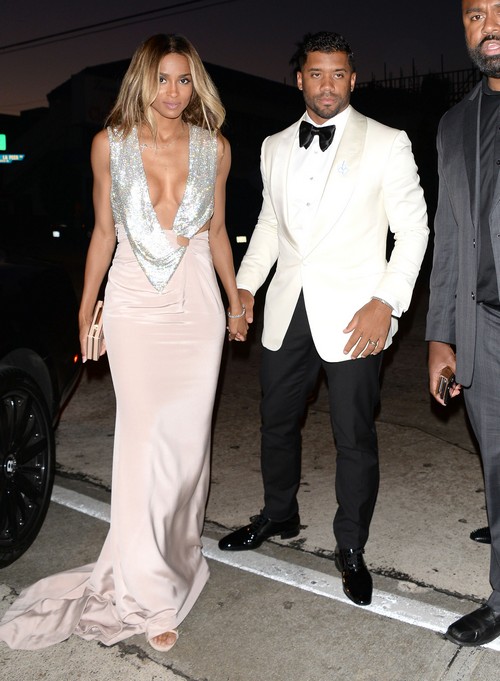 Ciara and Russell Wilson’s marriage might be perfect according to the singer, but her fans think otherwise – in fact Ciara now seems more like a Stepford Wife than a vital figure in pop culture. In fact, there’s speculation that Russell Wilson might be behind Ciara’s new outlook on life as the ‘Goodies’ singer has changed drastically since she met the NFL superstar one year ago.

According to People Magazine, Ciara opened up about her Russell Wilson wedding and marriage and how she’s never been happier in her life. The couple met back in March of 2015, shortly after Ciara pulled the plug on her engagement to Future after allegations were made that the rapper cheated on her. Ciara and Future have since been in a bitter public tug-of-war with each other over their 2-year-old son, Future Zahir Wilburn.

But now that Ciara and Russell Wilson are married, the singer is no longer thinking about all of the drama in her life and is instead concentrating on keeping things positive while renewing her strength within the Christian faith. Speaking about her life now, Ciara told the publication, “This is the happiest I have ever been. Our wedding was like a fairy tale. We looked at a venue in the U.S., but we also looked abroad, and England just seemed magical and perfect.”

Of course, this isn’t the first time Ciara has been engaged to another man or proclaimed her “happiness” in public. Yet, many critics think that after Ciara’s failed relationship with rapper Future, she’s hoping to restore her dignity by marrying devout Christian Russell Wilson.

The couple managed to keep their vow of chastity before their wedding and Ciara herself has posted social media photos and videos of her praying and living a more Christian-like lifestyle with her son, Future. Some fans even think that Russell Wilson might be ‘brainwashing’ Ciara.

The singer is no longer in contact with some of her closest friends, including Kim Kardashian and isn’t provocatively dancing and giving fans lap dances during her performances like she used to. Ciara might have made a lot of changes to help please her husband Russell Wilson, but will it take long for the cracks to show in the façade before she goes back to her old habits?

Tell us CDL readers, do you think Ciara and Russell Wilson’s marriage will last? Has Ciara made drastic changes to her lifestyle and image because of Russell Wilson? Let us know what you think in the comments section below and of course check back with CDL for all the latest update on all of your favorite celebrities right here.

Ciara and her new husband Russell Wilson grab dinner at Craig’s Restaurant on July 13, 2016 in West Hollywood, California. Earlier in the evening, they made their red carpet debut as a married couple at the ESPYS by FameFlynet