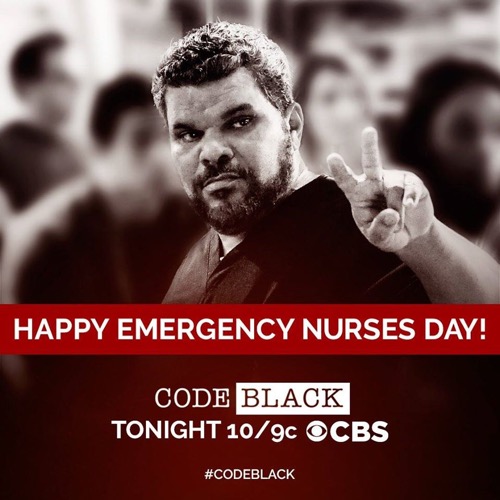 Tonight on CBS Code Black airs with an all new Wednesday, October 12, season 2 episode 3 called,  “Corporeal Form,” and we have your weekly recap below! On tonight’s episode, season 2 episode 3 Angus’ (Harry Ford) father tries to seize Power of Attorney over Mike, (Tommy Dewey) who is in a coma, even though Mike granted that right to his brother Angus.

Did you watch last week’s Code Black where Willis had too help a promising young soccer player make a life-altering decision after he was seriously injured when a bus carrying his entire team crashed?  If You missed last week’s episode we have a full and detailed Code Black recap, right here!

On tonight’s Code Black episode as per the CBS synopsis, “Willis defies Campbell’s orders when he helps Mario and Heather perform a radical procedure on a maintenance worker stuck under a boiler that exploded. Also, Angus’ father, Dr. Desmond Leighton (Steven Culp), tries to seize Power of Attorney over Mike, who is still in a coma, even though Mike granted that right to his brother, Angus.

But naturally the hospital couldn’t just shut down in the middle of the night so the staff had tried to do their best and keep the hospital running though no one was prepared for Anita. Anita had been dropped off on the hospital’s steps by someone that sped away and so everyone thought it was a gang initiation. So they had been planning on seeing to her cuts and making her stay in the hospital for a day while she had a concussion. And so the staff had probably been just as shock as their patient when she turned out to be heavily pregnant.

Anita had no idea or even inkling that she was pregnant. So she tried denying it to herself and to the people treating her, but they weren’t going to let her forget it and in fact they had been concerned about her advanced condition. Anita had had a sonogram and there had been some bleeding between the lining of her uterus and the placenta which was a concern. However, Angus didn’t think it would be serious if she remained on bedrest so whether Anita liked it or not she was going to be staying around a little longer at the hospital than she thought.

Only Anita didn’t want to comply with the doctor’s orders. She had hated that idea of staying because she thought that made her look weak. So Anita had tried to return to her gang that night and leave the hospital on her own when she exacerbated her preexisting condition. She had suffered heavy vaginal bleeding before she managed to make it to the door so the doctors had to try and save the life of both mother and baby. And an emergency caesarian wasn’t what they would typically do in the ER.

Yet, Anita hadn’t given anyone a choice. She had simply done what she wanted to and that had left two lives in the balance, but there that one if not both mother and baby would die before the night was out. So the hospital had then looked into Anita’s closest kin and they eventually found her half-brother who hasn’t seen Anita since she was in grade school. And he admitted that there had been family problems before he cut off ties with his younger sister.

So Anita’s brother was to be there for her now yet she hadn’t want a reunion. Anita had later come to and she had been fine. But there was probably a good chance that entire hospital heard her yelling at her half-brother because she thought he didn’t have a right to come back into her life. Even if had made her think about her baby and what was best for the little girl. The little girl had been born nearly full-term and so she was going to be staying at the hospital for a while. And odds are that she was going to be fine.

Anita, however, had honestly no idea what she was going to do with her newborn daughter. Though in the beginning, she was leaning towards giving the little girl way because she didn’t think she could a raise a baby. So one of the new baby face doctors at the hospital had said that he had gone into the system when he was two and he hadn’t turn out so bad. And so Anita had said that her daughter could be a doctor too or maybe a nurse like Angel if she gave her daughter away.

But Anita was asked if she wanted to say goodbye to her daughter and, once that baby had been in her arms, she hadn’t wanted to let her go. So her brother had offered her another option. Anita’s brother had said that he could make a home for the baby and his sister. That way she could raise her daughter and leave the gang life yet, while Anita had a happy ending, not everyone at the hospital did. There had unfortunately had been a woman that came in believing she was dead and Campbell had given her walking papers because he said that there was nothing they could do. Even if Willis had wanted to help her.

Campbell’s reasoning had been that they were a hospital and not a charity. So that’s why he had thrown out Jane Doe who had been nicknamed Janie by Willis, but Willis had so wanted to help her Janie because he had apparently thought he was dead too at one time. However, Janie had come back into the hospital after she had gotten hit by a car and that had been it for her. Or so everyone thought because Barry had later gotten a vision of Janie. Barry had needed to stay still while they remove the rumble off him. That had also pierced his heart. So seeing Janie had kept him calm while worked to save his life.

And they did save his life. Yet, Campbell hadn’t wanted Heather to perform surgery and he had found a way to punish her out of spite. So Campbell was sort of rude dictator down in the Emergency Room and neither Heather nor Janie had been his only victims. Campbell had also pulled a young doctor away from her patient because he had put her on probation even though she had already built something with the young boy that overdosed on cough syrup as well as that boy’s family. Therefore, Rorish had to frequently step in to minimize Campbell’s damage.

Rorish had kept the little boy’s family calm and she had also found him a new liver when the boy’s father offered up part of his. Plus, she also looked out for Heather when Heather had been shouted at for doing her job. So Rorish had tried taking care of the residents, but Angus had to do something on his own without help. Angus had apparently been named as the executor of his brother’s living will and so he had to stand up to his father in order to make sure that Mike’s intentions were fully carried out. And eventually telling his father to back off was probably the first time that Angus’s father hadn’t gotten what he wanted.