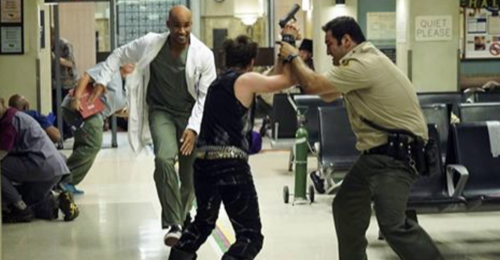 Tonight on CBS Code Black airs with an all new Wednesday, October 26, season 2 episode 4 called,  “Demons and Angels,” and we have your weekly recap below! On tonight’s episode, season 2 episode 4 Dr. Nolan (Kathleen Rose Perkins) and her boyfriend’s son are trapped.

Did you watch last week’s Code Black where Willis defied Campbell’s orders when he helped Mario and Heather perform a radical procedure on a maintenance worker stuck under a boiler that exploded?  If You missed last week’s episode we have a full and detailed Code Black recap, right here!

On tonight’s Code Black episode as per the CBS synopsis, “On Halloween night, Willis, Noa and Elliott rush to the scene of a fire at a haunted theater, where Dr. Nolan (Kathleen Rose Perkins) and her boyfriend’s son are trapped. Kathleen Rose Perkins Returns as Dr. Amanda Nolan, A Psychiatrist at Angel’s Memorial.”

The doctors at Angels Memorial Hospital tend have more emergencies than they could deal with however who would have thought that this year’s Halloween would have people running to the hospital. But unfortunately, this year was different. There were the usual injuries like heart attack or someone having too much drink and then there had been a fire at a crowded theatre no less. The theatre was apparently infamous because someone had killed several people and had then killed themselves in the theatre. So this year it had been decked out as a haunted house and sadly Dr. Amanda Nolan had thought a haunted house sounded like something she could do with Ian.

Ian was Amanda’s boyfriend’s son and her boyfriend had to fly out at the last minute. So the theatre was supposed to be this family outing yet the fire changed everything and there were people seriously injured as well trapped inside. However, Amanda and Ian were two of the unlucky ones. They had gotten trapped inside and to make things worse they had also gotten separated. Amanda had later said in her emergency call to some of her friends at the hospital that the debris had gotten in the way and that she didn’t know where Ian was because he wasn’t answering her when she called his name.

Yet, Dr. Willis and some of the others that had eventually arrived on the scene had tried to help. Willis had gone into the building even as it was unadvisable to help Amanda and together they called for Ian until he finally answered them and so they did pinpoint where he was, but they made the mistake of believing they could reach him on their own. Willis and Amanda had tried moving the debris and that had only created more problems. The debris gave way in the end and Amanda was injured to the point where she shouldn’t move. Only she still believed that they could still reach Ian on this own.

So Amanda was being pretty stubborn during a crisis however her stubbornness had luckily paid off for her because Willis did do as she had asked. Willis had continued to shift through the debris to give Ian an opening and thankfully he was able to get to the little boy before any more of the debris could fall. But the scene at the theatre had been hectic and the two doctors that Willis had brought with hadn’t been enough. Elliot and Noa were still first years. They were just learning the ropes of emergency medicine and so they shouldn’t have been trusted to work a scene with no supervision.

Willis was supposed to be their supervision and he had run off to play the hero while Noa and Babyface tried treating everyone that had been brought out of the theatre. However, there had been a reason for why Elliot had been nicknamed Babyface. Babyface was either your artist name or it’s a nickname that means no one takes you seriously. So Elliot didn’t really garner much respect when he and Noa tried looking for vein and instead found an artery yet what saved them was the fact that the firemen did eventually reach Willis and the others. And so the two first years did get their supervisor back.

Yet, things began spiralling out of control back at the hospital just as the theatre situation was getting resolved because the hospital had an incident. There had unfortunately been someone that was tripping on some drug or another and he had mistaken everyone in Halloween costumes to mean that he was seeing demons. So the guy had made a reach for one of the security guys’ gun and he had gotten a shot off before he could be restrained, but the bullet had hit someone and it had been Dr. Charlotte Piel. And if she had had her way then Charlotte wouldn’t have even been in the emergency room.

Charlotte had actually asked Rorish to be reassigned somewhere else earlier because there were a few people that knew her character Jessamine and didn’t really see her as a doctor. But Rorish had more or less said that it didn’t matter how other people see her and that it only mattered how Charlotte saw herself. So Charlotte stopped being ashamed of her past as an actress and she had gone back out into the emergency room where she did run into a fan that was dressed as Jessamine and it had been that little girl that Charlotte had used her body to shield when that guy had grabbed the gun.

So Charlotte had eventually died because she had been trying to do the right thing and her death had affected no one as much as Rorish. Rorish blamed herself for what happened to Charlotte. She second guess whether or not it had been the right decision to send Charlotte back out into the emergency room and had later all she had wanted to do was hide. However, Angel went looking for her and he did his best to assure her that Charlotte’s death couldn’t have been her fault. He said that she had asked Charlotte to do her job and that didn’t mean sending her to her death yet nothing could convince Rorish. Not when she had to notify Charlotte’s mother.

Rorish had lost a child of her own and so breaking to that kind of news to someone else was practically unforgivable in her book. Yet, she did what she had to and so did Willis. Willis had gone behind Campbell’s back to perform surgery on Ian who he had some internal bleeding and he had also involved a few people he shouldn’t have. Like, Heather. Heather was technically banned from the operating room by Campbell and so Campbell was in the right afterwards to further punish her. Only he told her that he couldn’t blame her for seeking only the best for her patient and that had been that for her.

But someone had surprisingly proved Campbell wrong. Angus had believed an unusual method would help his brother and so he had stood up against almost everyone until he ultimately got to decided what was best for Mike. And so Angus was the one that had finally gotten Mike to breathe on his own when no one else had thought it was possible.