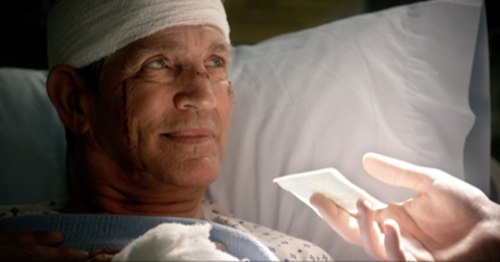 Tonight on CBS Code Black airs with an all new Wednesday, November 2, season 2 episode 5 called,  “Landslide,” and we have your weekly recap below! On tonight’s episode, season 2 episode 5 a group of children come in from a camping trip with measles.

Did you watch last week’s Code Black where on Halloween night, Willis, Noa and Elliott rushed to the scene of a fire at a haunted theater, where Dr. Nolan (Kathleen Rose Perkins) and her boyfriend’s son were trapped?  If You missed last week’s episode we have a full and detailed Code Black recap, right here!

On tonight’s Code Black episode as per the CBS synopsis, “The Angels Memorial doctors treat victims caught in a landslide, and a group of children come in from a camping trip with measles putting the entire ER at risk.”

It had been two weeks since Charlotte had died in the Emergency Room however the hospital and her friends were all trying to move forward. Elliot for instance found being busy helped him from being sad and Noa masked what she was feeling with her usual sarcasm. But unfortunately, the hospital wasn’t running as it was used to and everyone saw that after Angus made a critical mistake on tonight’s episode of “Code Black”. So no matter what anyone did or even what they said they were all simply off their game.

Angus and Elliot had been assigned a group of campers who were going “glamping” which was a glamorous version of camping. However, Angus who was technically in charge had assumed that the rashes that were on the children were from an exposure to poison oak yet he had been wrong. The rash was from the measles and Angus didn’t figure that out until after he brought a patient into the ER and had exposed everyone in sick bay to one woman’s measles. So Angus had seriously messed up and the worst part was that it did in front of Campbell.

Campbell was judgmental and he made Angus feel like the biggest idiot long before tonight. Yet, tonight he went out of his way. Campbell had immediately moved to cordon off the sick kids and the adults that had been exposed. So he had taken care of them, but he had also made sure to exclude Angus at every opportunity and he also had the audacity to appoint Elliot over Angus. Angus was in his second year and therefore should have the seniority over any first year. Not Just Elliot. And for some reason Campbell had wanted to use Elliot to humiliate Angus.

But Angus had managed to shake off that nasty incident and what had helped him was the fact that Mike had taken his first breath recently. Which was a huge step for a comatose patient. So Angus tried to maintain hope that Mike would eventually wake up and Mario did his best to back his friend. Mario had also believed that Mike could wake up any day now and that was unusual for Mario. Mario wasn’t the typical optimist though he was recently trying to be and so his father’s sudden reappearance in his life wasn’t helping.

The older Savetti had been brought back to the hospital after getting into some trouble and so Mario had stepped in to help care for his dad. Though naturally, his father refused to make Mario’s job easier. The older man had said that he wouldn’t be so beaten up if Mario had given him the money he wanted and so he of course, he took the easy out of. He found a way to blame Mario for his current condition and he merely refused to see how his actions was what led up to him being in the hospital. Again!

Mario though was used to that from his father. Vince it seems had always been that way and so Mario didn’t want any sympathy from anyone. Not even from Noa who had tried to offer him some. So Mario was almost fine with the status quo and later he did cough up the money that his father wanted. Yet, Mario knew that his father would come back one day asking for money and so he tried not to let it bother him, but it did and unfortunately he thought that was just something he had to live with.

Like Rick would have to live with his own life choices. Rick was an emergency first responder and he had gotten caught up in a landslide with two of his friends. But the one he had been able to help had blamed him for the murder of her boyfriend. Liz had said Rick had purposely left her boyfriend Drew die in the landslide and so Rick kept going over that moment because he wondered if he did want Drew to die. Rick had feelings for Liz and Liz knew it. So Drew dying the way he did would be like the perfect opportunity for Rick because he had at least saved Liz’s life.

Only Drew didn’t die. Drew had actually been found later on in the day with a wound to his stomach though the wound wasn’t fatal and he will live. So that begs the question who was right? Was it Liz when she said that Rick didn’t do everything he could because he wanted Drew to die or was Rick right? Did Rick truly do everything to save his best friend Drew? However, it took some time for Drew to answer any questions and when he did it hadn’t been that surprising. Drew had said that what happened hadn’t been attempted murder like both Liz and Rick feared.

Drew had in fact let go of Rick’s hand in order for Rick and Liz to live. So Rick hadn’t done anything wrong. He had just been a good friend and Drew had thanked him in the end because Liz was ok and so it was ultimately Liz that had to apologize. Liz had blamed Rick for something he didn’t do and had even made him doubt himself. Though thankfully their story had a happy ending when Drew had been found alive and the three friends did move pass what happened during the landslide.

But sometimes people need more than just the proof standing in front of them to help and so Rorish ended up talking to Angus about his conduct. Rorish had told him that she sympathized with him over what happened to Mike yet she told him that he was still a doctor and that he should think of his patients first. So Angus who did let a huge mistake slide because he hadn’t truly cared to be involved had later paid attention. He had showed Elliot the ropes which was what he was supposed to be doing all along and together they had saved a woman’s life from the measles.

Afterwards though Angus had to be there for someone else. He had to be there for Mario who was just devastated after his father died. Vince had apparently gone into cardiac arrest when Mario’s back had been turned and he had been declared dead right in front of his son. So Mario had needed a friend and it was good that he had Angus. Angus refused to leave him alone and had made sure that Mario had his shoulder to cry on if Mario needed that as well. And he eventually Mario did grieve.