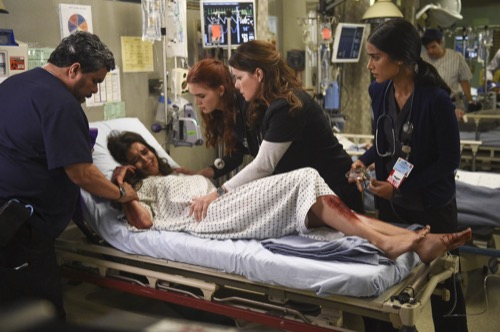 Tonight on CBS Code Black airs with an all new Wednesday, November 9, season 2 episode 6 called,  “Hero Complex,” and we have your weekly recap below! On tonight’s episode, season 2 episode 6 a comedian is treated after he collapses on stage during a performance.

Did you watch last week’s Code Black where the Angels Memorial doctors treated victims caught in a landslide, and a group of children came in from a camping trip with measles putting the entire ER at risk?  If You missed last week’s episode we have a full and detailed Code Black recap, right here!

On tonight’s Code Black episode as per the CBS synopsis, “Malaya must inform a college student who regains consciousness at Angels Memorial that she’s the victim of a rape, and Willis and Campbell butt heads over a terminally ill woman who wants to end her life on her own terms.”

The hospital was thrown into a mess on tonight’s episode of “Code Black” when a rape case came in and the lines between what was right and was wrong were blurred.

The policy at the hospital and the oath that everyone that works there had agreed to had said that they had treat every patient with the best care possible. But Seth Greer was different. Seth had been seen holding a young woman down on the ground and sexual assaulting her however, a good a Samaritan had seen what was happening and had immediately put a stop to it. Justin had beaten Seth within an inch of his life just to protect the victim and unfortunately that meant he could possibly charge with assault. Seth had been taken the hospital unconscious and he didn’t wake up within twenty-four hours of care. So things weren’t looking good for Justin and the real victim couldn’t back him.

The girl that had been assaulted was Joy and the last thing she remembered was attending the party at the frat house. So Joy couldn’t recall the night in question and nor did she know about the assault. It was Malaya that had inform her about what happened and it was Malaya that had stayed on her case despite how much it reminded her of her own assault. However, Malaya was good with Joy. She saw her through the rape kit, the photos they had to take as evidentiary evidence, and she did her best to tell Joy the honest truth. Malaya told Joy that what happened wasn’t her fault and later she introduced her to Justin. Justin had wanted to make sure that Joy was alright and he got to see that for himself yet Joy hadn’t only wanted to say thank you.

Joy had wanted Justin to tell her everything and he wasn’t sure if he should tell her. Justin tried to say that she was safe now which was what really mattered and, as Joy kept trying to get answers, she began getting heart palpitations. So it had actually become dangerous for Joy to find out what had Seth had done to her though Malaya kept trying to be there. Malaya had told Joy that she had fought back because of her nails and that still hadn’t enough for Joy. Joy had broken pelvis and she had ignored the large amount of pain she was in because she had wanted to find the man that had raped her. Yet, finding him and even yelling at him that she hoped he dies didn’t change her condition.

Joy had started to bleed because she had gotten up regardless of her doctor’s advice and she had needed to be check over because the internal bleeding was serious. Though, seeing and hearing his victim did help Seth to finally come to. Seth’s condition had actually taken a turn for the worse after he saw Joy, but at least he was aware of what was going on around him and that couldn’t be said for everyone. Joy’s bleeding had gotten so bad at one point that they had to cut her open just to see her through her injuries. So Joy had been willing to hurt herself to confront Seth and she had actually said something very telling when she had done so. Joy had said that she hoped he was as broken as she was.

Hopefully, she didn’t mean that she was forever broken though it going to take some time for her to heal and apparently knowing the truth will help that. Yet, the truth was actually a lot more complicated that Justin had described. Justin had said that he saw Seth on top of her and that he had intervened. So what the doctors wanted to know was why weren’t there any scratch wounds on Seth. The doctors had found Joy’s keys which had blood on them from probably when she tried to fight her attacker and there wasn’t a scratch on Seth. There was a scratch on Justin on the other hand and that led to several of the doctors questioning Justin’s story. Did Justin tried to protect Joy or was he the animal?

Justin had come into the emergency room with his girlfriend and so it obvious if he fabricated his story in order for his girlfriend not to find out. However, Joy was intensive care and Seth had started to crash not long after the doctors found out about the keys. So there was no way to ask Seth what happened and Joy still couldn’t remember a single thing. She had just thought that Seth was her attacker because she recognized him from the party when really Justin had been at that party too. Justin had been there and his girlfriend had remembered that he had been flirting with Joy at the bar yet she hadn’t put two and two together until Justin had been confronted about the keys. And that’s when she left Justin to deal with the fall-out on his own.

The fall-out of another matter, however, firmly fell on Willis when he backed a patient that had wanted to die and had even helped her. The patient had been Whitney Lithnick and she had been through so much. Whitney had been sick as a kid and she had never gotten better because she was slowly dying. But Whitney didn’t want to die after she lost all of her faculties. She had wanted to die while she was still herself and so Willis helped her. Willis’s own mother had had ALS and he had told Whitney’s mother about how he remembered the last time his mother hugged him as well as the fact that his mother had died four years after that. So Willis helped Whitney’s mother come to accept her daughter’s decision.

Though the one person that couldn’t handle it was Campbell. Campbell had been Whitney’s doctor for years and he hadn’t wanted to let Whitney go, but that choice had been taken out of his hands. Campbell had felt that he could convince Whitney to live and that hadn’t happened. So he had taken out his anger/ grief out on Willis and then he finally said what would always plague him. Campbell had said that he would have liked to have at least say goodbye to her and so he’s going to remember that he couldn’t because Willis had done what he refused to. And that’s going to forever put the two men at odds.

It was it, though. Willis had done the right thing and so it doesn’t really matter that he had waited until Campbell was in surgery before he made his move. Willis had given a patient the peace she deserved and Campbell’s surgery had ended helping Mike Leighton. Mike had regained consciousness and the surgery that he recently went through might help better his chances at walking again. So Angus and his fairly testing father finally got Mike back and they were willing to support through whatever he needed.

So it all came together in the end and Joy was able to sit in vigil by Seth’s bedside because she wanted to support her true hero.