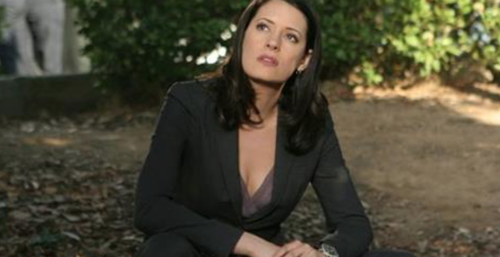 Tonight on CBS their hit drama Criminal Minds returns with an all-new Wednesday, October 12, 2016, episode called “Taboo,” and we have your weekly Criminal Minds recap below. On tonight’s episode season 12 episode 3 Emily Prentiss (Paget Brewster) returns to the BAU team when they are called to investigate the disappearance of three women.

Did you watch the last episode of Criminal Minds where JJ arrived home shaken after a rough case, she broke down and told her husband about the abduction of two children? If you missed it we have a full and detailed Criminal Minds recap, right here for you.

On tonight’s Criminal Minds episode as per the CBS synopsis, “The BAU welcomes back Emily Prentiss (Paget Brewster) as they are called upon to investigate the disappearance of three women.  Paget Brewster Returns as Emily Prentiss. Sherilyn Fenn Guest Stars as Gloria Barker.”

A few teenagers had just been hanging out, talking about girls, pretty much doing the usual when they came across an old oil drum and one of them had tried to kick it. So the boy that had kicked that old drum had injured his foot and that led to the others wanting to see what was inside. But what the kids weren’t prepared to find was a hand sticking out of the concrete that filled the drum so they called 911. And the local police eventually kicked it over to the FBI when they realized that the case might be too much for them.

However, the BAU who got the case didn’t know how much they would be able to do. Their leader, Hotch, wasn’t around at the office because he had taken some time for himself. So their old friend Emily Prentiss had come back to sort of fill in for him while he’s gone though she also managed to leave an embarrassing impression on Alvez and admittedly she too was stumped about what to do for this case. They had a victim and they couldn’t really profile their Unsub until the victim was freed from the cement.

So the only information they did have to work with was that their victim had been put into that drum and buried in cement alive. Which they found out thanks to an x-ray. Yet, the BAU and the local police didn’t know why the first victim was targeted until they found out about the second victim. The first victim had been Lisa Barclay and she had been a white single mother, but the second mother had also been a single mother as well and she too had been in her mid to late thirties.

Sharon Landon, however, had also been black and she had recently lost her husband. So the only connection between the two women had been their status. They had both been single mothers and so that let the guys from the FBI know that their Unsub was possibly recreating his own childhood. They had profiled that their Unsub had grown up with a single mother and that something traumatic must have happened in his childhood. Though whether the mother was the abuser or he simply blamed her for what happened was still pretty unclear initially.

Again they hadn’t been working with a lot in the beginning. But as the day went on, they did find out more and they helped their fine tune their profile. Reid for instance had noticed that the victims had all been lobotomized when he had finally got the chance to study them so that had helped them figuring things out yet suddenly time was on the essence when another single mother went missing and there had been evidence of a struggle at her apartment. So they had tried to put everything together as fast as possible though they were still doubting themselves along the way.

First, they believed the Unsub was kidnapping these women because they reminded him of his own mother but then they questioned if she had simply dated a single mother and she turned his advances. So that’s what they did with everything else they had. Like when they said their Unsub was performing lobotomies to recreate his own mother and then questioned the part about lobotomizing the frontal lobe. The frontal lobe controlled inhibition so they wanted to know if their Unsub believed he was creating these women or if he wanted to make slaves out of them. And resorted to killing them when the lobotomy failed to work.

So they kept going back and forth with their ideas when the tradesmen angle finally yielded some results. They had profiled that the Unsub knew a lot about cement and he was also using Clorox for the lobotomy. But the lobotomy had made them ask Garcia to check women that were in their mid to late thirties and had suffered brain damage in her frontal lobe. And Garcia was only able to come with one name that matched that description. Garcia as it turns out had found Lynelle Barker who developed an injury that caused hyper sexuality so Lynelle’s only family was a mother and an “adopted” brother.

The adopted brother, though, was really her son and her mother had simply adopted him to protect her daughter who had been too young as well as too sick at the time to be able to care for the baby. So Garcia looked into Lynelle’s “adopted” brother and he now worked with Blue Breeze Pools which confirmed their tradesmen angle. Yet, they profiled that her son Stuart might have become sexually attracted to Lynelle because he must have witness her hyper sexuality and believed he was adopted. And so the lobotomy thing could have been his own way of removing his victims’ sexuality.

Though as they later found out, when they went to pick up Stuart and found him trying to kill his mother/grandmother Gloria, was that Stuart didn’t regret what he did. He had killed his biological mother because she didn’t want to sleep with him and he was going to kill his mother/grandmother because he felt that she should protected him from seeing Lynelle’s sexuality, but the thing about Stuart was that he enjoyed blaming the others for his own problems. It was apparently everyone’s fault that he killed and not his own.

So Stuart did try to run when he saw the BAY yet they managed to catch him and they were on their home with Emily having made peace with Alvez before the day was out. Emily and Alevez had seemingly had a long conversation when they were on the job so they talked their problems out and Emily ended up being the only one that truly gotten to know Alvez. But she had later kept his secrets to herself and the two were fast becoming friends now.