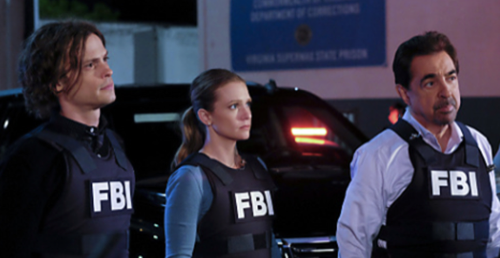 Tonight on CBS their hit drama Criminal Minds returns with an all-new Wednesday, September 28, 2016, premiere called “The Crimson King,” and we have your weekly Criminal Minds recap below. On tonight’s episode season 12 begins with Agent Luke Alvez, (Adam Rodriguez) a new recruit from the FBI’s Fugitive Task Force, joining the team as they try to capture a killer who escaped from prison along with 13 other convicts.

Did you watch the season 11 Criminal Minds finale where Hotch (Thomas Gibson) was apprehended by a SWAT team for suspicion of conspiracy? If you missed it we have a full and detailed Criminal Minds recap, right here for you.

On tonight’s episode as per the CBS synopsis, “Agent Luke Alvez (Adam Rodriguez) joins the BAU team, which is tasked with capturing a killer who escaped prison with 13 other convicts at the end of last season.”

Thirteen serial killers had escaped prison back in May however the Behavioral Analysis Unit has been actively hunting them since then and they had recently gotten down to only having five serial killers still on the loose on tonight’s episode of “Criminal Minds”. So it had actually come as a surprise when one of the people they were looking for had gotten carelessly arrogant. The unit had gotten a call after they suspected Daniel Cullen had purposely set one of his infamous prisoners free in order for his victim to carry out a message. And the message had been directed to the BAU.

BAU had been carved into the victim’s stomach when usually Cullen’s MO meant he carved Disgust into victims. So that interested Agents Hotch and Lewis. The two of them had been the first on the scene and they had taken a look at the victim’s stomach because they hadn’t understood why Daniel would change his victimology all of sudden. Especially as Daniel had actually liked to hurt his victims and wouldn’t have left the hesitation marks that had been seen on Brian Phillips’s stomach. And so they questioned if they were really hunting Daniel Cullen.

Daniel wouldn’t have left hesitation marks and he would have carved “Disgust” into the victim because that was now instinctual to him. However, if someone were to copycat Daniel then they would probably need to know him and that meant they were looking for a copycat with an agenda. So Lewis had questioned the victim and she had asked him to go through everything he had experienced so they could figure out who they were really looking for. And when Brian had described being gassed and even smelling bubble gum – that had been enough for the BAU.

They had summarized that they were looking for Peter Lewis, but they hadn’t understood why he had target his victims like that because usually Peter had others kill for him. So they were looking for other victims when they found Chelsea Carter. Chelsea had had the word “Hotch” carved into her forehead and she had continuously repeated Hotch’s name because it appeared that she had psychological break from reality. And so they unit had tried to connect Chelsea to Brian when they realized that both of their victims had D.I.D.

D.I.D. was multiply personality disorder and so that helped the unit come up with a profile. Peter Lewis was attacking people with that disease because he was using their other personality to kill for him. So the reason Brian had been let go was because Peter had tapped into his other personality and had given him a murderous mission. Yet, the BAU hadn’t known that when they came up with names of other people that could be at risk and had the deputy that was watching Brian repeat them.

But the Crimson King was so much under Peter’s spell that he went back to Peter after killing the deputy and allowed himself to be gassed again. So the unit and Dr. Lewis had talked to Brian’s parents because they wanted to know what led to Brian having multiply personality. His parents though weren’t much help. They had adopted Brian through their church and unfortunately he had come to them after suffering years of abuse. Brian had apparently had bottles broken over his back and his foster parent would usually use the jagged edges from the bottle to cut him.

The parents therefore didn’t know when Brian created his other personalities to protect himself, but they suspected the girls that he would become had been part of his early childhood in the foster care system. So the team had looked into what might have happened when Brian fell under Peter’s influence when they question if the real Crimson King had been part of the group. A new analyst that had joined Hotch’s team recently had wanted to capture Daniel Cullen because Daniel had carved up his partner and so he recognized Daniel’s MO that Brian was copying.

Daniel Cullen had been known as the Crimson King so if Brian thought he was the Crimson King then he would have to kill Daniel. However, the unit and more importantly Dr. Lewis found Brian before he could kill Daniel because Peter had left them enough bread crumbs and they reminded Brian of what the girls he used to know would say in foster care. They repeated that “No One Was Going to Hurt You Like That Ever Again”. And that woke up the real Brian. The Brian that would never dream of hurting anyone and who was so ashamed of what he did that he couldn’t meet anyone’s eyes.

Daniel Cullen, though, had been drugged for most of what happened and that had seemingly caused memory loss. So Daniel hadn’t remembered Agent Luke Alvez or what he did to Alvez’ partner and that had almost set him off. Yet, Alvez had ultimately chosen to let that go when he decided to join Hotch’s unit permanently and began a flirtatious relationship with Garcia. The team were still looking for Peter Lewis and they knew that they had to find him before he could begin another one of his experiments. And so any help, even if Alvez could sometimes be too lone wolf, was welcomed.