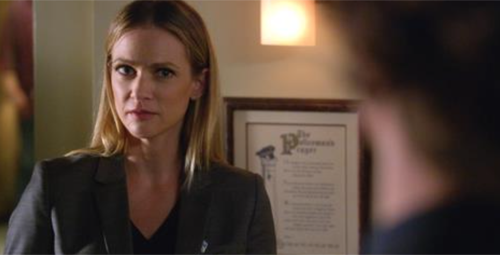 Tonight on CBS their hit drama Criminal Minds returns with an all-new Wednesday, November 16, 2016, episode called “Elliott’s Pond,” and we have your weekly Criminal Minds recap below. On tonight’s episode season 12 episode 6 Three children disappear while riding bikes on the same path as a similar unsolved disappearance 30 years ago. The BAU investigates to learn if the cases are linked.

Rossi had previously told everyone that Hotch was on vacation to explain their boss’s recent absence however he revealed tonight that hadn’t been the truth. He had apparently lied because Hotch’s son Jack’s life had been in danger and had been at risk. Jack had unfortunately been stalked by Peter Lewis and initially the Bureau thought they could protect him from the serial killer. But Peter was always able to get just close enough to Jack to prove that he was still a threat. So Hotch had been forced to take drastic measures to protect his son and that’s why Rossi was suddenly coming clean.

Rossi had to tell the truth because he needed to explain that Hotch had entered the program with his son and that it meant Hotch had to officially resigned from the BAU. However, the FBI haven’t wasted any time with filling Hotch’s old position. Emily Prentiss had quickly been assigned as the new Chief of the BAU division and admittedly she was nervous. Emily hadn’t expected that she would one day take over and so she didn’t know how she would be in the position though she wanted to be good at the job. So Emily’s first case as the newest Chief was a test of sorts and she didn’t want to let anyone down.

Though Emily’s first case as the Chief was similar to a much older one. Emily and the team had gone to Clayton, Delaware after three teenagers had been reported missing. The kids had been P.K, Josh, and Bones and they had been really interested in making movies. So everyone had thought that the kids were simply making another movie or just having an adventure until they didn’t come home because that’s when their parents started to worry. The parents of the three missing boys had said that their sons didn’t runaway and that they had done nothing like staying out all night before. And so the Sheriff wanted to help yet his memories of the older case was what haunted him.

The Sheriff told the BAU that there had been another set of missing kids back in 1983. That time it had been a boy and a girl who were twins and they had been racing their older brother Deeley back home. Yet, Deeley made him and his siblings were never seen again. So the small town of Clayton had ostracized Deeley. There were some that thought he killed his siblings and others that didn’t want to be around Deeley after he started drinking and never stopped however the Sheriff still sees Clayton from time to time and Clayton had unexpectedly introduced himself to the BAU. The little kid that was now all grown up had drunkenly asked the Sheriff if he was even useful.

The Sheriff had apparently been a little too cocky when he was investigating Johnny and Allie Henson’s disappearance yet Deeley wanted to know if the Sheriff was now just lazy. But the Sheriff allowed Deeley to go home because he said he felt a little bad for him with all that had been through. So the team missed had ended up missing their first chance to investigate Deeley and instead they had tried to focus on the three missing boys. The missing the boys had actually mentioned a name as they were making their sci-fi movies and it had been Jimmy Ridley. Jimmy had grown up on the Ridley Farm and there has always been rumor about him.

Some folks in town have said that he’s crazy and that he might have killed those kids back in 1983. However, the Sheriff had said that there had been no evidence indicating that and that Jimmy had been barely older than the twins. So Jimmy Ridley wasn’t considered to be a threat, but the team still needed to investigate that angle and what they had seen on the Ridley Farms had been enough to convince them that Jimmy could have taken the twins as well as the current missing three. Jimmy had created a collage of sorts with pictures of the twins and the latest kids on the bike. And so finding one of the kids’ helmet had made them all believe that Jimmy was their Unsub.

Only Jimmy couldn’t be there Unsub. Jimmy suffered from mental problems however he made sure that other people stayed away and wasn’t afraid to frighten them in order to be left alone. So Jimmy had revealed on his own that he three firecrackers at the kids sometimes because he didn’t like them on their property and seeing as most of them do it out of curiosity as if he was a circus freak– he had right to use any means necessary. Though later that day the team had tried the one resource that they knew could help. They tried talking to Deeley and he told them everything that he knew. Beginning from when he found his siblings at Elliott’s Pond.

Deeley had said that he went to go fetch the twins for their weekend with their dad and that they had raced home. Yet, his siblings had tried taking the shortcut through the corn fields and so those were the places the BAU checked next. They looked by Elliot’s Pond and had found one of the boys’ backpack so they called for an all-night search and Deeley had even sobered up to help. So when one of them had come across a hunting trap, Deeley had helped them determine who’s trap it was. Deeley had said that it probably belonged to Old Man Clemmens. Clemmens was a survivalist nut that like Jimmy preferred for no one to find him.

But Garcia had checked out Clemmens and she had found out that he had a record and had been committed to the local asylum before it had been burned down. So Garcia said that one of the things that Clemmens had been arrested for was the fact he had kidnapped a minor because he had been lonely yet that wasn’t the only bit of news. Garcia had also found out that Clemmens had been freed from the asylum after it burned down in the last part 1982 and so that would explain why the Henson twins went missing in 1983. And so the there was only one part of the equation that didn’t seemingly fit with Clemmens being their Unsub – he was too old.

Clemmens would have been 82 if he was still alive and he couldn’t possibly be able to carry three thirteen-year-olds off much less keep them in submission. So Alvez had a theory about that. Alvez said that there was a chance that Clemmens never killed the Henson twins and that the twins were the ones that had kidnapped the three boys. However, they had needed to get to Clemmens’s Farm to see if he was there or if he had an underground bunker, but luckily Clemmens had used his house and the Henson twins hadn’t changed a single thing. And so the team found all three kids and Deeley got his siblings back.

Though with one case under her belt, Emily had still been unsure about whether she wanted Hotch’s position or not and in the end so she didn’t make up her mind until they were back at headquarters.

And only then she did decide that she wanted the job.