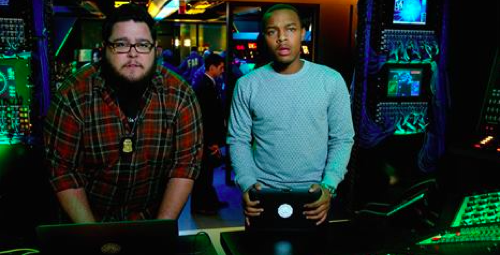 Tonight on CBS CSI: Cyber returns with an all new Sunday January 10, season 2 winter premiere called, “404: Flight Not Found” and we have your weekly recap below. On tonight’s episode, the team investigates what appears to be a hack into air traffic control’s communication system.

The series follows an elite team of FBI Special Agents tasked with investigating cyber crimes in North America. Based out of Washington, the team is supervised by Deputy Director Avery Ryan, an esteemed Ph.D. Ryan is a behavioral psychologist turned cyber shrink who established the FBI Cyber Crime division and heads a “hack-for-good” program, a scheme in which the criminals she catches can work for her in lieu of receiving a prison sentence.

On the last episode, after an innocent bystander was killed when dozens of ATMs suddenly spew money into the street, the Cyber team investigated the bank heist that was orchestrated by a real-life cyber Robin Hood. Did you watch the last episode? If you missed it, we have a full and detailed recap right here for you.

On tonight’s episode as per the CBS synopsis, “the team investigates what appears to be a hack into air traffic control’s communication system, but a greater threat emerges when a flight vanishes into thin air, and the team is drawn into the world’s first case of cyber-hijacking.”

Tonight’s season 2 episode 11 looks like it is going to be great and you won’t want to miss it, so be sure to tune in for our live coverage of CBS’s CSI: Cyber at 10:00 PM EST! While you wait for our recap hit the comments and let us know how excited you are so far with this season.

Flight 2782 disappeared on tonight’s all new episode of “CSI: Cyber” and the only clue to their whereabouts is the trace that was left behind during the initial hack.

Apparently someone had hacked air traffic control and fortunately the hack was caught in time before other planes could be compromised. But that’s not what the families of those onboard want to hear. They want answers and more importantly they want the safe return of their loved ones. So Avery and her team were called in on this one. And it was their job to find the plane.

Though they were running short on time. The team you see didn’t know the second part of the hacker’s plan and from the onset they knew they were dealing with someone unpredictable.

The hacker it seems hadn’t just stopped at diverting the plane. Whoever they are, they then set up tens of decoys in order to disorient air traffic control while they sent Flight 2782 to an unknown location with faked plan. Therefore, the Cyber Unit quickly realized they had a hijacking on their hands and until that person came forward to make demands – no one in the bureau could even guess at their motives.

So everyone onboard eventually became a suspect. The Unit looked into anyone with a specialized skill set and then they looked into the pilots. Just in case their situation was another suicidal pilot. And yet nothing fit.

And no alarms went off.

But an old friend came through for them. He found out what was blocking the signal to the plane and from there they found a hijacker. And as it turns out all they had to do was look for the person that was literally carrying a white noise machine.

A machine like that could fly by undetected and TSA wouldn’t necessarily think it was suspicious. And so that’s what happened in this case. An Erica Chan was able to go through security without setting off any red flags and once she was onboard – she began looking for her target.

A member of that DOJ had stopped by the unit and they had told them why Erica had hacked the plane. It looks like she’s a gun for hire and the Triads are paying her to kill the prime witness in a murder investigation. Who as it happens was a young teenage girl.

Rebecca/ Natalie had entered the witness protection program after she witnessed a high ranking Triad member kill someone. And later when her whole volleyball team was supposed to go on n overseas trip – she convinced the US Marshals to let her go. Though one marshal was going with her as an added form of security.

But Erica knew that was going to happen so she tailed the marshal in hopes he would lead her back to the witness she has to kill. Which he didn’t because he didn’t want to ruin the trip for the young woman in question. Therefore, he kept a careful distance and that threw a spanner into Erica’s plan.

And when the Cyber Unit figured out why their hijacker hadn’t made a move, they then contacted her. They told her that her game was up and that she had honestly no place to go. And in return she threatened them.

She said that her witness had to die else she was going to kill everyone onboard. Yet no one was going to arguing back and forth with her so they put a plan in place to arrest her right away. And that led to Erica hacking into the cockpit where she then attempted to crash the plane.

However, quick thinking worked towards alerting the captain to what was happening and he reset the Wi-Fi. And afterwards safely landed the plane in spite of what Erica did. So now Erica is going to jail and a patch created by Artie (the newest Cyber Unit consultant) will prevent someone else from every hacking into the FAA ever again.