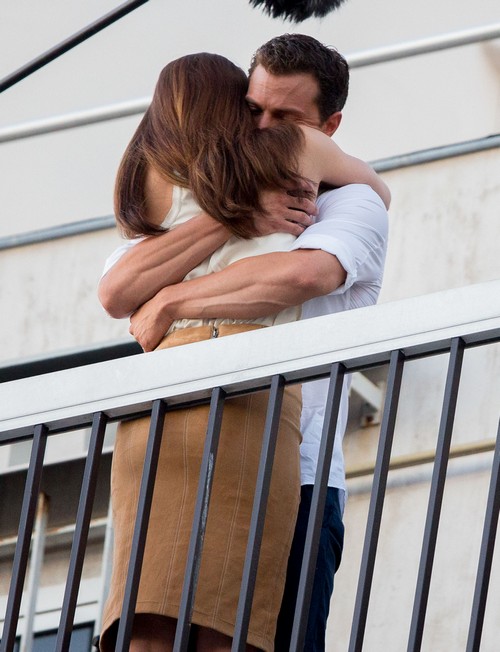 Dakota Johnson’s sexy post on her Instagram account is causing the actress a lot of trouble for Jamie Dornan and his wife, Amelia Warner. Not only are fans wondering what the seductive pose is all about, but whether or not Dakota Johnson and Jamie Dornan are getting more up close and personal than usual while filming ’50 Shades Darker’ in France this week.

Dakota Johnson’s sexy pic has the entire gossip world wondering if she’s sending Jamie Dornan a special message here. In the pic, the actress seems to be mirroring her ’50 Shades’ character of Anastasia Steele in a selfie that can be described as nothing less than seductive.

“I’ll have an order of Identity Crisis with a side of What’s My Hand Doing, #please,” the actress wrote on her Instagram post of herself sitting in a car wit her hand nearly up her dress.

Unless this is a case of life imitating art, Dakota Johnson’s extremely suggestive photo is an indication that she definitely has something on her mind, and that might as well be her sexy co-star Jamie Dornan.

Now that the Irish actor’s wife Amelia Warner is no longer lingering on the set of ’50 Shades Darker’ every day, Jamie Dornan and Dakota Johnson can finally feel comfortable with one another. After all, it’s their job to film risqué sex scenes, and who in their right mind would want to get naked with a married man while their wife is watching your every move?

No wonder Jamie Dornan and Dakota Johnson’s chemistry has always been a problem for the ’50 Shades’ films.

If that weren’t enough, the media keeps speculating over a Jamie Dornan and Amelia Warner divorce in the gossip blogs. With Dakota Johnson seductively posting photos on Instagram, Amelia Warner has ever right to be worried about her husband’s sexy co-star along with the state of her marriage.

The on-screen Christian Grey seems to be more at ease whenever his wife isn’t around, leading to more rumors that Jamie Dornan and Amelia Warner’s marriage is definitely in trouble. Otherwise, why would Amelia Warner insist on being on the set of the ’50 Shades’ movies when she could easily be at home while letting her husband do his job?

Tell us CDL readers, what do you think? Is Dakota Johnson’s flirtatious Instagram post intended for her co-star Jamie Dornan? Is a Dakota Johnson and Amelia Warner feud brewing behind the scenes? Let us know what you think in our comments section below.