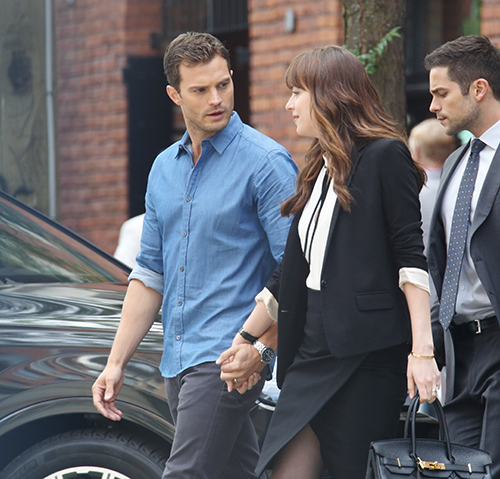 Jamie Dornan and Amelia Warner have been inseparable ever since the British actress and singer joined her husband on the set of ’Fifty Shades Darker’ in Vancouver several weeks ago. With Amelia Warner watching her husband’s every move, is she just as controlling as his onscreen Christian Grey alter-ego?

Fans have long speculated that ’Fifty Shades’ co-stars Jamie Dornan and Dakota Johnson might be getting up close and personal off-screen as they do on-screen, and that might be why Amelia Warner is now watching her husband’s every move.

Despite just giving birth to the couple’s second child several months ago, she’s been a constant fixture on the ’Fifty Shades Darker’ set, and even participated in one of the beach scenes for ’Fifty Shades Freed’ while the cast and crew were filming in Saint-Jean-Cap-Ferret, France this past week.

Eyewitnesses say that the 34-year-old actor couldn’t break free from his wife, despite working on a honeymoon scene with Dakota Johnson. Amelia Warner is perhaps so paranoid about a possible Jamie Dornan and Dakota Johnson romance brewing that she even joined them in the water for a swim at one point.

The British singer’s constant presence sure isn’t going to help all of those Jamie Dornan-Amelia Warner divorce headlines from surfacing. If their marriage is as rock solid as Jamie would like the public to believe, then his wife should do everyone a favor and give her husband the space he needs, especially when he’s hard at work filming back-to-back installments of the remainder ’Fifty Shades of Grey’ movies.

Plus, Amelia has two young children to worry about. She should just let everyone do the jobs they were hired to do without before such a constant interruption to the cast and crew. Clearly, she can’t be that insecure about herself and her marriage, can she?

But given how much Dakota Johnson’s bikini pics are getting so much attention on the set of the film right now, it’s no wonder that Amelia is worried that her husband might stray. He is, after all, one of the sexiest men in Hollywood right now and seeing Jamie Dornan topless would make any woman weak in the knees.

Tell us, CDL readers, what do you think? Is Jamie Dornan and Amelia Warner’s marriage really headed for a breakdown? Is a real-life Christian Grey divorce in the works? Amelia needs to let go and trust her husband before things get worse. Let us know what you think in our comments section below!