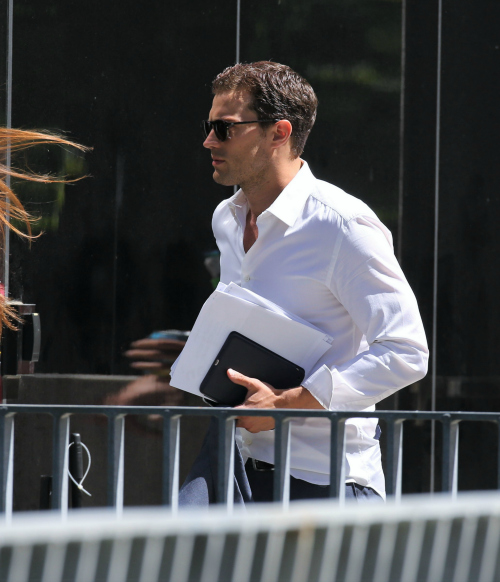 New photos from the Vancouver, Canada set of ‘Fifty Shades Darker’ show that Jamie Dornan is back and looking good after a shooting break for his wife Amelia Warner’s birthday. Reportedly, Dornan’s marriage is in much better shape despite Dakota Johnson set romance rumors.

Amelia Warner may be feeling better since the on-set sexual tension is rumored to be between Dakota Johnson and Rita Ora – and not with Dakota’s leading man Jamie Dornan. Perhaps the sexy scenes between Dakota and Jamie get her warmed up for behind-the-scenes action with Rita.

If you’re not current on the plot of ‘Fifty Shades Darker’ you’ll know that Elena Lincoln is Jamie’s former lover and older woman that introduced him to kink. Kim Basinger will play that part and that’s a major part of the Darker storyline as she butts heads with Ana Steele (Dakota Johnson).

Rita and Dakota’s off-set affection has been documented on social media and it could be romantic or innocent – but when you combine that with the news of Dakota Johnson’s split with Drowner’s vocalist Matthew Hitt, it could indicate that the two are more than “just friends.”

Other photos leaked from set including one from Fifty Shades of Grey author EL James that was a slice of cake indicating the Christian-Ana wedding had been shot. These latest set photos are rumored to be interiors of the birthing scene when Ana gives birth to Christian’s child.

What do you think fans of Fifty Shades? Do you think Rita and Dakota might be involved in a set romance? Share your comments below and stay tuned to CDL for more ‘Fifty Shades Darker’ news and behind the scenes spoilers.