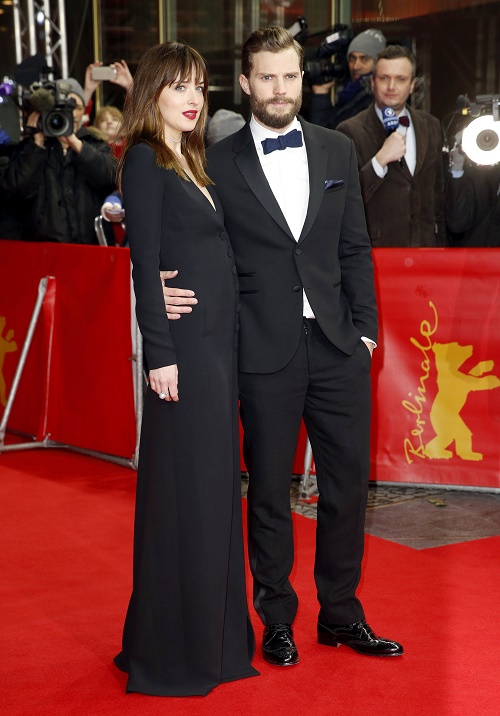 Fifty Shades of Grey stars Jamie Dornan and Dakota Johnson have skyrocketed to super stardom since the highly anticipated film hit theaters, and the actors know it. That is why they are refusing to shoot the Fifty Shades of Grey sequel until they get a hefty raise, and they are currently renegotiating their contracts. According to the March 23rd edition of OK! Magazine, both Jamie Dornan and Dakota Johnson are demanding substantial salary increases.

Both Dakota Johnson and Jamie Dornan were up-and-coming players in the Hollywood scene until they landed their big breaks on Fifty Shades of Grey, and by the time they are done they could be a couple of the highest-grossing actors in the game this year. OK! Magazine reveals, “Stripping down doesn’t come cheap – and with Fifty Shades of Grey set to pull in more than $400 Million in the box offices, its stars are pushing for a bigger payday before signing on for the sequels.”

A Hollywood insider dished to OK! Magazine, “The word is that they are asking for at least $20 Million each – and percentages on the back end, which could be substantial if the next film is as big as the first. They have been advised to strike now, while their stock is sky high. They’re indispensable to the producers, and they know it”

It’s not typical for rising actors like Johnson and Dornan to gross this much money this early in their career – but I think we can all agree that Fifty Shades of Grey isn’t a typical film. Considering the magnitude of the first film, it is detrimental that Jamie Dornan and Dakota Johnson star in any sequels that are produced – so the actors shouldn’t have any problems getting the money that they are requesting. Do you think that Dakota Johnson and Jamie Dornan are being greedy? Or do they deserve every penny that they are asking for? Let us know what you think in the comments below!