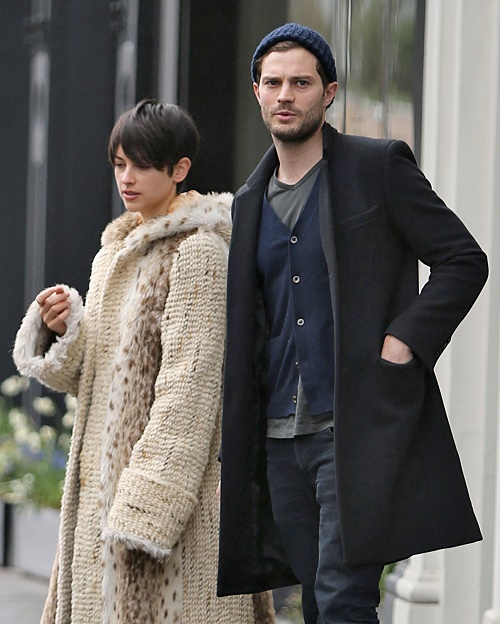 If you were a fan of Jamie Dornan in Fifty Shades of Grey, you’re in luck. It seems Dornan will be reprising his role. US Weekly is reporting that Jamie Dornan will appear in the Fifty Shades of Grey sequel if the studio decides to make one, though it’s safe to say it’ll be when not if they choose to make it. The current film has already brought in over $400 million worldwide and it’s just getting started. Watching all that green roll in should have studio execs greenlighting production of the sequel in no time.

Rumors have been swirling that Jamie Dornan’s wife, Amelia Warner, wasn’t exactly thrilled with her husband’s decision to take on the role of Christian Grey. The kinky sex scenes in FSoG are enough to make anyone squirm, let alone Dornan’s spouse. However, those rumors appear to be false according to Jamie Dornan’s rep. He indicated that Dornan is “delighted that film is breaking box office records worldwide” and “he is looking forward to making the next film.”

This is the second time Grey fans feared the fate of Christian Grey would be up in the air. Initially, Charlie Hunnam, star of “Sons of Anarchy,” was cast as the domineering billionaire. When Hunnam backed out for personal reasons, the studio had to go on the hunt again. When it was announced that Jamie Dornan would play Christian, fans were divided on the casting decision. Some thought he was the perfect fit. Others complained he couldn’t live up to the character created by author E.L. James in the book the movie’s based on. Nevertheless, fans ponied up the cash and it seems that both the studio and Jamie Dornan aren’t going to mess with success.

Many of the film’s negative reviews have taken jabs at Jamie Dornan’s performance, but critics seem to have been more accepting of Dakota Johnson’s portrayal of Anastasia Steele. Let’s face it: Fifty Shades of Grey isn’t going to win an Academy Award for best picture, but it’ll satisfy the fantasies of hot and bothered readers looking for the same thrill in theaters. E.L. James has two more books in the series, so be on the lookout for possible film versions of Fifty Shades Darker and Fifty Shades Freed.

What do you think about Jamie Dornan’s decision to reprise the role of Christian Grey? Did you like Dornan in the movie and would you like to see him do the sequels? Let us know what you think in the comments below and don’t forget to check CDL often for the latest celebrity gossip and news.