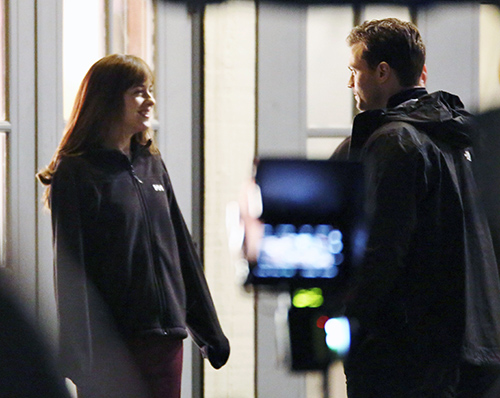 Jamie Dornan and Dakota Johnson are filming Fifty Shades Darker, and things might be getting a bit tense on set, which isn’t good for their onscreen relationship. Talk from the set is that with all the publicity photos being released – official and otherwise – Jamie Dornan is worried that his wife Amelia Warner will slip into post-partum depression due to his rated-R film work.

It’s one thing for Jamie Dornan to heat things up with costar Dakota Johnson when the cameras are rolling, but when the two are hanging out on set and pics are snapped of them looking cozy, that’s too much for Amelia Warner to handle, according to reports.

Amelia is home alone with two kids now while Jamie Dornan is off getting naked and frisky with a much-younger woman. Fifty Shades Darker spoilers reveal that Dornan is getting the full kit off in this film and Amelia might not like Dakota Johnson getting an eyeful of her man.

It’s never easy to come off any labor and delivery – it takes a toll on your emotions and your body – but knowing your hubby is engaged in very naughty play with another woman may be too much to handle. Jamie doesn’t want to put Amelia at risk, so he’s struggling to balance home and work.

The problem is, with Jamie pulling back from Dakota when the cameras are off means their on-screen chemistry is suffering – and the worst thing for Fifty Shades Darker is for anything to come off awkward or less than intimate.

Considering the red room subject matter, if Jamie is distracted, the whole thing could look like a botched amateurish project. And since Jamie Dornan and Dakota Johnson won a Razzie Award for “worst couple” this year, they can’t afford to have the sequel flop.

To put some distance between him and co-star Dakota, Jamie has brought a football to set and between takes has been tossing the pigskin with Dakota. That literally puts them far from one another. Is this perhaps an attempt to publicly reassure wife Amelia Warner there’s no off-camera hanky panky?

Let’s face it – the books are poorly written and the critical reviews of Fifty Shades of Grey were scathing, yet the flick still scored more than $570 million in the US alone, so the sequels are sadly inevitable. But will the second be worse than the first?

If Jamie Dornan can’t figure out a way to shield his wife from post-partum depression risk because of his on-screen amorous antics, Fifty Shades Darker may go down in flames. Will Dakota Johnson push back on Dornan and tell him he can’t let Amelia Warner tank their movie?

Stay tuned to CDL for more Fifty Shades Darker news from the set.