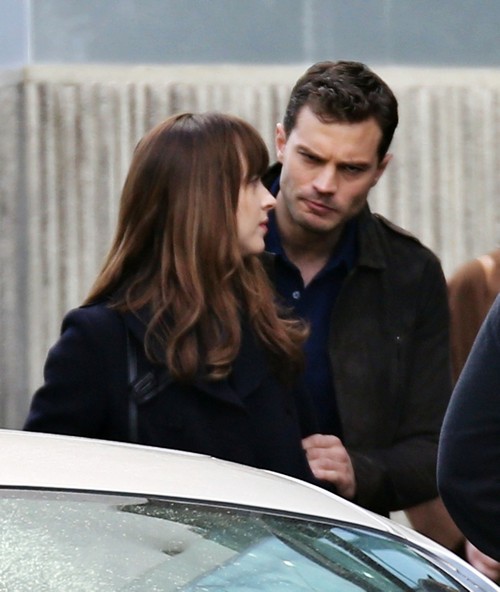 Fifty Shades Darker is finally heating up! Jamie Dornan and Dakota Johnson are getting closer and steamy so it certainly appears that the co-stars have overcome their previous lack of chemistry while filming the second movie in the Fifty Shades trilogy.

There had been initial reports that Jamie and Dakota had zero heat between them while filming the sequel to Fifty Shades of Grey. There was even talk that executives wanted to replace Jamie as Christian Grey after a series of less than spectacular on-screen kisses between Dakota Johnson and Jamie Dornan had director James Foley completely frustrated.

As previously reported, set insiders began to blame Jamie for all the problems because he was constantly thinking about newborn daughter and wife Amelia Warner and couldn’t seem to focus on work.

Jamie could also have been distracted because the actor is fresh off filming the third season of The Fall with Gillian Anderson. Jamie portrays killer Paul Spector in the Netflix original series.

Not only was Jamie filming The Fall, the actor also had three other projects in the production. Jamie was filming Jadotville, Anthropoid and The 9th Life of Louis Drax. Jumping from one project to another without much of a break might cause anyone to be unfocused and lackluster.

Maybe Jamie and Dakota failed to generate the necessary chemistry because Fifty Shades Of Grey tied with Fantastic Four for Worst Film of the Year at the 2016 Razzie Awards. Jamie received the Razzie for Worst Actor and Dakota was the recipient of the Worst Actress Razzie.

What also didn’t help? Dakota and Jamie received the Razzie for Worst Screen Combo. That’s enough to thrown anyone off their acting game, don’t you think? Especially roles as intense and intimate as Anastasia Steele and Christian Grey.

Fifty Shades Darker executives had begun to get nervous that the onset problems might delay the film’s February 2017 release but things seem to be back on track now.

The final movie- Fifty Shades Freed – is scheduled for release in February 2018. That means Dakota Johnson and Jamie Dornan probably won’t get much of a break between wrapping the second movie and filming the third one. Hopefully Jamie and Dakota can keep the chemistry going.

Stars are spotted on the set of ‘Fifty Shades Darker’ in Vancouver, Canada on April 04, 2016.
Pictured: Dakota Johnson, Jamie Dornan by FameFlynet