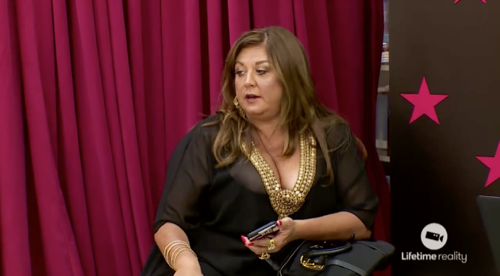 Tonight on Lifetime after a Dance Mom returns with an all-new Tuesday, November 22, 2016, episode and we have your Dance Moms recap below. On tonight’s Dance Moms Season 6 Episode 32 Finale “Two Teams, Two Studios Part 2,” Abby tries to show her own worth through the mini team’s performance.

Did you miss the last episode of Dance Moms where in the Part 1 of 2 finale the elite team left the ALDC for Abby’s rival after being fed up with their coach? If you did we have a full and detailed Dance Moms recap of the last episode, right here for you!

On tonight’s Dance Moms Season 6 Episode 32 as per the lifetime synopsis, “Conclusion. In the Season 6 finale, the elite team face off against Abby and her mini team for the first time ever at a competition. Later, the elites strive to prove that they can win without Abby’s direction; and Abby tries to show her own worth through the mini team’s performance.“

#DanceMoms starts on the day of the competition with the junior elite moms telling Abby that the girls are competing. Abby asks them all to make a list of why they hate her. Holly says they won’t stay and let her degrade them. Jill says she screwed their kids at the last competition and Abby denies it.

Abby says if you didn’t know me, you’d be at home. Jill says the same goes the other way. Jill says everyone is replaceable. Abby says those moms think their kids are stars now and she had nothing to do with it. Abby says the minis now are better than the elite team was at that age.

The moms talk to the mini moms about sticking up for Peyton and pushing her to get back in the group dance. Ashlee says if they don’t back her up, they set a precedent to allow Abby to mess with all of them. She says they have more power if they band together.

Jill is exhausted from dealing with Abby. Jill says they put up with her antics when Abby was a good dance instructor but now she’s distracted and holding them back. Kendall says Abby annoyed her and Kalani says that’s the reason they left. Holly says Abby thinks they’re playing a game.

Jill tells the girls they have a reason to dance and do well today. She says it’s not a vendetta but to show they can do it without her. They remind the Brynn, Kalani and Kendall to run their solos and get ready. Kira says the mini moms have said bad things about Kalani.

Kalani says she wants to show Abby she’s not 10 years old and still doing acro. The mini moms talk to Abby and she says she saw a lot of older competitors and not a lot of little kids. Peyton’s mom tries to talk her into letting Peyton doing the solos. Abby doesn’t know her name.

Abby says she was acting like another mother that told her to f-k off. She says she always puts someone else’s child before her mom, dad, and has sacrificed so much. Abby says she won’t do it anymore. Kerri is annoyed that none of the other moms stand up for her like they promised.

Jill says the girls have these great solos from the other choreographer and she’s worried about Kendall. Ashlee asks what’s wrong. Kendall hurt a muscle in her neck and is worried about dancing. She can’t turn her head and is upset because she loves this solo. Ashlee says they have to have her for the group.

Ashlee knows she’s nervous and thinks Kendall is making her neck tight over what she has to prove to Abby. Ashlee says Abby has always made Kendall feel less than. The other moms tell Kendall it’s okay and she can do the solo next week. Kerri comes in crying to the moms.

She says the other moms didn’t stand up for her. They tell Kerri that Peyton can perform her solo on their mommy dancing school team. They get Peyton dressed up to compete. Kerri comes and tells Abby that Peyton is dancing on the other team. Abby says good luck.

Kerri tells the other moms that they are not loyal. She calls them back-pedalers and says they’re not a team. Sari thinks Kerri is too sensitive to deal with Abby since she’s a rough communicator. Abby tells her soloists that it’s important that they are amazing to win this.

She tells the little girls not to live a life of regret and to do a good job on their solos or else. Elliana is nervous about her “Maddie” solo and Yolanda hopes this proves she’s Abby’s next golden girl. Elliana takes the stage to dance.

Alexus is up next with her solo and does a good job. The junior girls encourage Peyton before she takes the stage. Abby thinks Kerri is Peyton’s biggest problem. She says Kerri will stand between Peyton and stardom. The other mini moms cheer at Peyton’s dance.

They talk about how the garbage stuff didn’t make sense. Now the moms talk to Kalani and Brynn before their solos and encourage them. Brynn is up first for her dance. Abby cheers for her and smiles when she’s done. Ashlee says Brynn has never danced like that and she loves it.

Abby hears her whispering. Kalani comes out to dance next. Kira is thrilled with the dance that showcases Kalani and not how Abby wants her to be seen. The mini moms say they like their solos better. Abby says the other girls wasted their time and she didn’t see anything magical.

The moms go outside and Abby comes out too. Then the girls come out after solos. Jill asks what she thought about the solos. Abby plays dumb and then says no comment. Brynn says she’s glad Abby didn’t say anything. The junior girls just walk off with their moms.

Holly says who cares what Abby thinks and can’t wait for her to see their group dance. Erin calls the girls before they go on for the group routine. She says this is not about Abby, it’s about them walking towards something else and dancing for themselves.

Erin couldn’t be there since she had another recital but she took time to call the girls. Kira says Erin is a better coach from afar than Abby is up close. Holly is worried about the prop of the bowl of powder. The moms give them some last minute notes.

Holly says this dance is a statement to Abby that they won’t tolerate her behavior. Kira says Abby failed them and this dance is a message. Abby rehearses the minis at the last minute. Stacey says Abby needs to realize that they are the ones that are there for Abby.

Abby threatens the little girls before their group routine as usual and says any of them can go. The mini group numbers are up first. Kerri is upset that Peyton doesn’t get to dance but says she’s there to support the team. They dance and Abby is pleased.

The junior elite team takes third place. Holly is floored that they came in third but is proud of the girls. Later, all are outside and Kira confronts Abby about clapping for the girl that beat Kalani. Abby says she’ll wait to speak when Kalani is present.

Kira says Abby is disgusting for clapping. Abby says she was thrilled the other girl won. Kira says she hates her and calls her rude, mean and ugly. Holly chimes in and says she wants the minis to be higher than the teen group and says that makes no sense.

Abby asks if they’re afraid of them beating them. Ashlee piles on. Holly brings up Abby’s lie at last week’s competition about trying to get them disqualified. Abby says they have no respect or dignity. Jill starts yelling at Abby and says she’s to blame for this.

Jill thinks Abby has lost her mind. Abby says she doesn’t give a damn. Abby curses at them and Ashlee curses back. Jill hoped today would show Abby her wrong doing but she behaved viciously. Jill tells Abby she’s dead to them and says Abby made them hate her.

Jill says they’re done with ALDC LA. The moms go back to pack up and Kira says karma is a bitch and Abby is going to do well in prison.