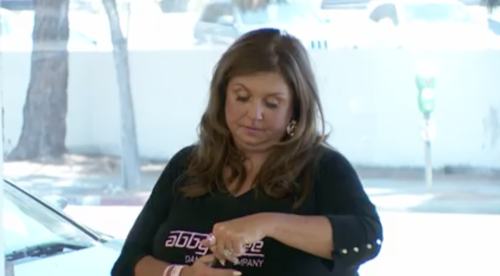 Tonight on Lifetime after a Dance Mom returns with an all-new Tuesday, October 25, 2016, episode and we have your Dance Moms recap below. On tonight’s Dance Moms Season 6 Episode 29 “ALDC For Sale?,”  Abby favors the mini team.

Did you miss the last episode of Dance Moms where Abby choreographed an emotional routine to raise awareness for teen suicide after tragedy struck Kira and Kalani’s hometown? We have a full and detailed Dance Moms recap of the last episode, right here for you!

On tonight’s Dance Moms Season 6 Episode 29 as per the lifetime synopsis, “Abby’s trial hits the news again; and a call from Debbie Allen leads the moms to speculate about the future of the ALDC. Later, Brynn performs her first solo of the season; the elites are tasked with a challenging dance and Abby favors the mini team.“

On this week’s episode of Dance Moms Abby’s legal troubles continue to dominate the talk at ALDC. As the moms come in for rehearsal Abby is nowhere to be seen. When she does come in she blows right by everyone and locks herself in her office to deal with her personal issues. The moms and kids are shocked. They are a little lost as Abby is not there to do the pyramid or assign the routine.

Gia steps up and lets the teens know that they will be doing a picnic themed group routine. She also tells the minis that they will be doing a group routine called Gossip Girls. She tells them “This routine is based on all of the gossip that is going on around here.” She also tells Brynn “You will have your first solo of the season. Brynn is very excited but also very nervous.

There is a rumor going around that Lilli will be getting her first solo, but this has not been confirmed by Abby because she has been locked in her office. Stacey is excited by the prospect of her daughter getting her first solo. However, she is reluctant to go and ask Abby whether or not it is true. After a lot of prodding from the other moms, she goes into the office and asks Abby “Is Lilli getting a solo?” Abby tells her “There will be no solos.” Stacie is upset and asks her “Does that mean you are taking the solo away from my daughter?” Abby snaps and tells her “Yes because you are an idiot.” Stacey leaves the office and is very upset. The other moms are stunned when she threatens to leave and try to calm her down and convince her to stay because they realize what a risk her leaving poses to the mini group.

The next day Abby returns. She tells everyone “We are not going to talk about my legal issues or the investigation anymore.” Stacie says “I am ok with that. I just want to know what is happening with our kids.” Abby tells her “Your daughter has a solo so just be happy about that.”

Abby steps into the studio and works with the minis on their Gossip Girl routine.She then moves on to work with Lilli on her solo, which is called Step By Step. Abby is worried that Lilli won’t be able to pick up the routine in one day. She then moves on to work with Brynn. She tells Brynn “This is your first solo of the season. It has to be beautiful.” Brynn is worried because she wants to prove that she can live up to the standards set by Maddie and Jojo and be the new leader of the ALDC team.

Abby then moves on to rehearse the group routine. Jill says “The routine is fun and it will challenge the girls, but I don’t think it is competition worthy.” Abby tells them “After the stress of last week’s competition I think the kids deserved to just do something fun.” The elites routine is just not coming together. They are struggling with the blanket prop and the movement. The moms are worried that the girls won’t be able to pull it together.

When the team arrived at the competition Abby and the moms are in the park talking. Abby just seems really frustrated and angry. She tells them “I felt like at this point in my life I would be able to retire and do something else.” Jill asks her “If Debbie Allen wants to come in and take over full time would you let her?” Abby says “I don’t know.” Yolanda says “If Abby would just say that she was in trouble and needed help I would be more sympathetic to her, but instead she is just being mean to everyone and won’t tell anyone anything. It’s hard for me to feel any sympathy for her.”

On the day of competition, Abby seems unusually nervous. She is focused on the minis. Stacie asks her “If our girls do well do they get their jackets?” Abby says “If they win they get their jackets.” The minis do well with their performance and Abby seems pleased with she sees, The teens and their moms are very nervous about their performance due to their struggles in rehearsals.

The minis take first place with their performance.  Picnic in the Park takes second place in the in the teen group. Lilli won first place with her Step By Step solo. Brynn wins the Overall solo award with her Left at the Altar solo. After the awards presentation, Abby presents the minis with their ALDC jackets. The elite moms don’t stick around. Jill says “This is their moment. Abby has wanted this for five years.”