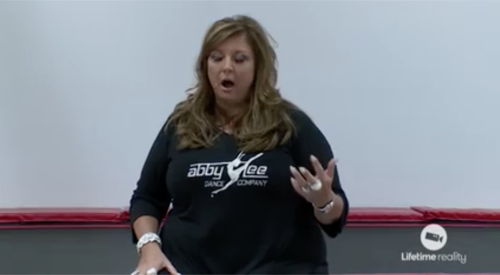 Tonight on Lifetime after a Dance Mom returns with an all-new Tuesday, November 1, 2016, episode and we have your Dance Moms recap below. On tonight’s Dance Moms Season 6 Episode 30 “Float Like a Butterfly, Sting Like Ab-bee,” the elite team’s moms take control of the choreography, leading to a huge conflict with Abby.

Did you miss the last episode of Dance Moms where Abby’s trial hit the news again; and a call from Debbie Allen led the moms to speculate about the future of the ALDC? If you did we have a full and detailed Dance Moms recap of the last episode, right here for you!

On tonight’s Dance Moms Season 6 Episode 30 as per the lifetime synopsis, “The elite dancers prepare for a commercial shoot, hoping to redeem themselves from last week’s loss. Later, the elite team’s moms take control of the choreography, leading to a huge conflict with Abby.“

On this week’s episode of Dance Moms Abby steps in to do the pyramid. Jill is frustrated because she feels that the juniors are not getting the attention that they deserve because she is giving that time to the minis. Abby starts with the mini-pyramid. Lilli is at the top of the junior pyramid. She then tells the girls the week is a tribute to Muhammad Ali. She tells them that they will be doing a duet featuring Lilli and Peyton. The group routine for the minis is called Cast the First Stone.

Moving on to the juniors Abby goes quickly through the pyramid. Jill is not happy that she does not spend that much time on them. Abby tells them “We will be doing a hip hop routine this week for our dance competition.” The moms and girls are excited. She also tells them “Our girls will be in a commercial. Because of this I am bringing in two girls from our LA studio to work with you.” Jill asks “So this is not the group number?”

Abby tells her “No. They will learn the group number tomorrow.” She then introduces them to the two teenage boys who will be working with the ALDC girls on the commercial as well as the director. Abby tells them “I will be taking a spa day while they work with you and I expect them to work you just as hard as I would.” Jill is upset that Abby is once again leaving the teens to work on their own. She says “It’s no surprise that Abby is taking off and leaving our girls to work alone. She doesn’t care.”

The shoe promoter is not happy with what he sees in the rehearsals for the commercials. He tells the girls “I don’t want you guys representing my brand and looking like you don’t care.” Jill is worried about the fact that the girls won’t have much time to rehearse for their group performance in between rehearsing and shooting the commercial. She says “Once again Abby has decided where she wants to be and it isn’t here. Now we have moms have to pick up our girls and make sure that they are ok because Abby is not making them a priority.” This makes Jill very angry.

Abby is working with the minis on their group routine. Yolanda says “Cast the first stone is clearly a dig on us moms and we know that. We moms get along and we know we have to win.” Meanwhile the junior moms are becoming more and more frustrated with the fact that Abby is not spending time with their girls when their schedule is jam packed with a commercial and their group routine.

Abby says “I want my girls to be the greatest.” When Abby moves on to work with the Elite girls on the group dance Ashlee is not happy with the routine. She says “Once again this is not working. What kind of tribute dance is this? These girls can’t go out there in big boxing gloves and shorts and make it work.”

Jill and Holly meet up with their daughters to try and change the group routine. They decide to go to another dance studio and change the routine. They ask the commercial choreographer Eric if it is ok to use some of the things they have learned with him in their group routine. Eric tells them “You have to ask her. I would be ok with it.” Jill then asks him “We would also like to use some of your boys.” He laughs and tells them that would be fine.

Abby shows up while the girls are rehearsing and tries to micromanage the commercial. Jill tells her “We want to talk about the girls group dance. They are not happy with the group dance that you have choreographed. Eric has said that it is ok to use the choreography that he taught them and we want to use the boys in the dance.” Abby is not happy to hear this at all. She throws up her hands and tells them “Go ahead and do whatever you want.” She says “I have had it with these mothers. They want to replace Jayden and Serena with boys who don’t know the choreography. This is getting ridiculous.”

On the day of competition, Ashlee says “We are not putting a boring dance on stage. It’s about holding her accountable for what she said at the start of the season.” The shoe manager comes in with a rough cut of the commercial and everyone is impressed except Abby. She tells him “I would have used a piece of plexiglass and put one of the minis up there.” This comment really upsets Holly who asks her “Did he ask you what you would have done?” Kira speaks up and tells him “Thank you very much. Our girls confidence has been very low due to some things that have been going on this week and this really helps a lot.” He tells them “You all did a really great job.”

The minis do their duet and Abby is very impressed. She says “This is the first time I have seen Peyton actually look like a dancer on stage.” Meanwhile, there is drama backstage as the two girls from the LA school arrive at the competition. Jill asks them “Did Abby tell you to come?” One of the ladies speaks up and says “Abby told us what time to be here.” Kira says “The girls aren’t dancing.”

The fight is on between Abby and the moms. Kira tells Abby “This is ridiculous. The girls are not doing that crappy number and that’s final.” Kira steps outside and tells the two new girls “Listen the girls are not putting that boxing number that Abby put together on stage. If the girls can watch the routine that our girls put together and get it then they can dance.” The elite girls run through the routine and the moms are very excited.

Meanwhile, the minis are getting ready to perform their group dance. Everyone is very impressed with their dance. Backstage the drama continues. Chris tells the moms “I can’t allow the kids to dance unless Abby says it’s ok and she won’t say it’s ok.” The moms confront Abby about not allowing the boys to dance. Abby says “That’s not true.I told you a hundred times to let the boys dance.” Eventually, they sort it out and the group is allowed to dance with the boys and the new kids. The kids are also wearing the sneakers they just shot the commercial for. Serena’s nerves got the better of her and she didn’t step into the dance.

At the awards ceremony Sting Like a Bee wins the top award for Duet. Count the First Stone wins top Mini dance. The elite girls do not win their category. They are very disappointed. The moms decide that they are going to take their girls and leave the school. Jill says “I think we need to find a choreographer and do our own thing.”