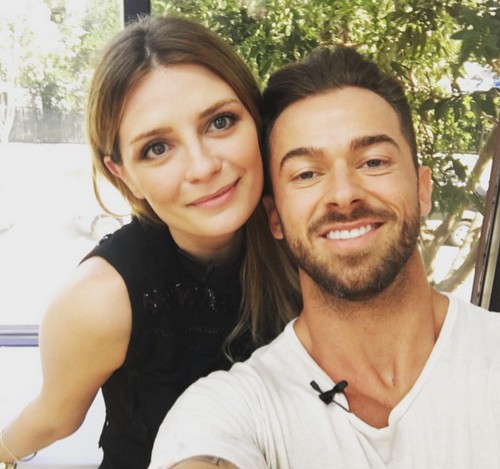 Plus, “The O.C.” alum is already done with her stint at a 5150 psychiatric ward, much like Britney Spears, who has since bounced back into the Hollywood limelight.

The last time we saw Mischa Barton on TV she got into a fatal car crash as Marissa Cooper. But that’s just us not counting her brief involvement in the very short-lived — two episodes short — CW series “The Beautiful Life: TBL” as returning supermodel Sonja Stone.

On Wednesday, the “Cyberstalker” star took to Instagram to share a snap with Artem. In her caption, she asked her followers to share a “crazy” team name for them. She wrote: “Hey guys. We need a team name #helpus!! The crazier the better! Something strong!”

Her fans quickly pitched their suggested team names, and they include: Team Mischart, Artemish, Bartvintsev, Bartem, ChaChi, and many more “crazy” team names like how Mischa wanted it to be.

Come Monday night, March 21, we’ll definitely know the official team name of the dancing pair when they hit the dance floor for the “DWTS 2016” premiere episode.

Aside from asking for team name suggestions, Mischa Barton has also kept her followers posted by sharing behind-the-scenes photos of their rehearsals. A week ago, she shared a selfie in the rehearsal studio which she captioned: “Dance your hear out! Literally!”

Days later, she revealed that her dance pro partner was making her work on her posture for their routine.

It’s really refreshing to see 2003’s “It Girl” making baby steps toward the U.S. limelight after spending several years in London, England as a fashion designer. Four years ago, Mischa even launched Mischa’s Place, an online-based store where she sells cosmetics, clothing, and many more.

hey guys we need a team name #helpus!! The crazier the better! Something strong! @theartemc @dancingabc