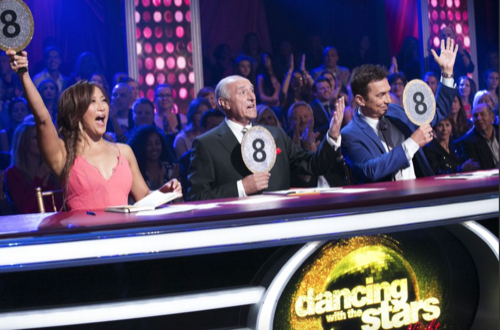 Tonight on ABC Dancing With The Stars 2016 airs with an all new Monday April 4, season 22 episode 3 and we have your weekly recap below. On tonight’s episode, the celebs dance to “The Most Memorable” time or moment of their life.  Also an elimination occurs after the third week of performances.

On the last episode, the 12 celebrities readied themselves for Latin Night, one of the hottest nights in the ballroom, with each celebrity performing either a rumba, salsa, samba, paso doblé, cha cha, or Argentine tango, on “Dancing with the Star.” At the end of the episode Geraldo Rivera and Edyta Sliwinska were the first couple sent home. Did you watch the last episode? If you missed it, we have a full and detailed recap right here for you.

On tonight’s episode as per the ABC synopsis, “each couple will dance to a song of the celebrity’s choosing that encompasses a memorable time or truly incredible experience in their life. These heartfelt performances promise to showcase some of the most exciting choreography and emotionally robust routines of the season yet. Viewers can expect to see Wanye Morris dancing to the powerful memory of singing the national anthem at the Olympics with Boyz II Men.

Kim Fields celebrating her bus trip from Harlem to Los Angeles, in which she landed a syrup commercial which ultimately led to her breakout role as Tootie on “The Facts of Life,” Von Miller reliving the year the Denver Broncos won the Super Bowl, which earned him MVP, and Marla Maples commemorating the year her daughter Tiffany Trump was born, to name a few. Each celebrity will perform a foxtrot, waltz, contemporary, samba, jive, tango or paso doblé.”

Judges Comments: Len: “Dance is a marriage between music and movement and you pulled it off. I would have liked some more fluidity in the arms. What a great start.” Bruno: “It was very well pitched and very well played. I liked the story and you had good attentions, you make a good actor. You need to reach and extend your movements.” Carrie Ann: “What a beautiful story to give your child, it was full of joy.”

Judges Comments: Bruno: “I am very proud of you, you really tried to give us smooth quality and you did it well. It is really hard to criticize you.” Carrie Ann: “This is how your parents live on, you ripped our hear out. It was a very simple routine and you showed it greatly.” Len: “It was a little unstable at times but it had elegance, style and emotion. It truly was two people coming together and dancing as one.”

Judges Comments: Carrie Ann: “You look exactly the same, it is freaky. You dance like twins, that is not easy to do.” Len: “You came straight into the dance, it was like maple syrup, smooth and tasty.” Bruno: “You had a lot of Foxtrot quality there, but I told you before, watch your shoulders.”

Judges Comments: Len: “What I like about you is that you come out and give it one hundred percent, I love seeing a big guy be graceful.” Bruno: “That was a work of art, sculpted to perfection. You are huge but yet you are really really light. Work on your turns though.” Carrie Ann: “I watched you play at the Superbowl, you dominate. I think you have more potential than we are seeing, you know I am telling you the truth. It was pleasant but I want more from you.”

Judges Comments: “You turned out out to be light, bright and zesty hot canary. I have to praise that that was a proper Jive all the way. But be careful not to be flat footed.” Carrie Ann: “You are just so right, you have so much energy and I am happy that you didn’t take any short cuts.” Len: “You are happy, I am happy.”

Judges Comments: Carrie Ann: “I saw much more refinement, you gathered all the energy from our audience. Just watch your hands though.” Len: “I didn’t see enough refinement in that, I thought you did a competent performance but I wanted more refinement.” Bruno: “Your son is a delight. You put so much into it, but you got excited and you began to skip, you can’t do that, it loses the finesse of the dance.”

Judges Comments: Len: “It’s a wonderful performance, it didn’t look like a Paso Doble though.” Bruno: “I felt like I was watching Wonder Woman. Fantastic, I loved the creativity and the power.” Carrie Ann: “That was bad ass, I disagree with Len. We have to keep the show moving forward, that was innovative.”

Judges Comments: Bruno: “That was your best performance to date.” Carrie Ann: “I think the performance came from you, it was the most inspiring of the night. Thank you for sharing your story and making it so gorgeous.” Len: “It was a very emotional story, you portrayed it perfectly. Overall, a wonderful job, well done both of you.”

Judges Comments: Carrie Ann: “This show is having a profound effect on you and that makes me happy. You had a breakthrough tonight, you were dancing with joy.” Len: “You performed your best dance, well done.” Bruno: “You were more relaxed, more engaged. Timing is not your strong suit, maintain a good attitude.”

Judges Comments: Len: “I think you lost your posture on occaissions but you have lovely fluid movements like ice cream on apple pie. I think you are great.” Bruno: “It was grand, majestic, it was a stellar performance. When you are so emotionally involved, sometimes you get so excited and it brings little mistakes.” Carrie Ann: “You were creating the beat with the way you moved, we were all inside the music. You were the rockets red flare.”

Judges Comments: Carrie Ann: “Tonight you were with the music, you were on the wave. It was brilliant, you were better than Superman.” Bruno: “I am going to explode in a minute, that is what I was waiting for. It had passion, beauty of movement. You are special.” Len: “You lost your frame on occasion, but that was the speed of the dance. I would have preferred some stillness. You are proof that anyone can do whatever they want.”

RESULTS: The first couple who is in jeopardy is Doug Flutie & Karina Smirnoff. Joining them are Mischa Barton & Artem Chigvintsev. Also joining them are Jodie Sweetin & Keo Motsepe.

On this third week of competition, the couple leaving us this evening is Mischa Barton & Artem Chigvintsev.