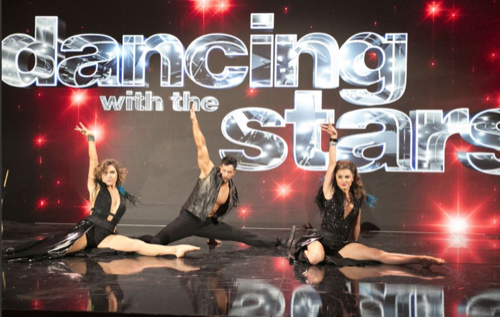 Tonight on ABC Dancing With The Stars 2016 airs with an all new Monday May 16, season 22 episode 9 and we have your weekly recap below. On tonight’s episode, a double elimination occurs after the ninth week of performances, which feature two dances from each couple, including a trio dance.

On the last episode, the remaining six couples took the competition to the next level as “Judges Team Up Challenge” came to “Dancing with the Stars,” Each of the judges – Len Goodman, Carrie Ann Inaba and Bruno Tonioli – coached two couples, as well as chose their songs, dance styles and overall creative.  Did you watch the last episode? If you missed it, we have a full and detailed recap right here for you.

On tonight’s episode as per the ABC synopsis, “the five remaining couples advance to the semi-finals as the competition heats up, on “Dancing with the Stars.” Each couple will dance two dances – one being a style the couple has not danced to yet, and the second being a Trio Dance, in which each celebrity couple will dance with a third dancer.

Judges Comments: Len: “This is such an important night, the road to the winner starts now and you started with a show stopper, brilliant, well done.” Bruno: “Even the guys could not outshine you, you are the undisputed queen of the jungle, you were the star attraction. Such confidence, such beauty, such skill, I am astonished.” Carrie Ann: “You are unstoppable, it is on, Paige wants it.”

Judges Comments: Bruno: “Out he came with the confidence of a lion tamer taking on two wild cats. You handled them very well, in command. Beautifully handled.” Carrie Ann: “From all the semi finals I think you you have made the longest journey from where you started. I loved the intensity of all the movement, you really were in the Argentine Tango mode, I could feel you trying to get exactly the right nuances. You did amazingly well, but I would have loved to have seen those elongated lines.” Len: “You came in with no dance background and it is just amazing how much you have improved. Great job.”

Judges Comments: Len: “I loved the little touches, I loved the sharp edge. Last week was a rough week, this is what you get (standing ovation).” Bruno: “I loved the build up and the lightening all the way through. That was the come back we have all been waiting for. It was passion, fire, artistry, love you.” Carrie Ann: “Welcome back Wanya, there you are, stay there.”

Judges Comments: Len: “I thought it was a tasty jive. Great fun and energy, it got a bit hectic here and there but you come out here and you go for it one hundred percent and that is what a Jive is all about.” Bruno: “I liked the flirtation but the innocent charm of a child’s play, difficult choreography and you lost timing. It was the most difficult dances you have ever done, but brilliant done.” Carrie Ann: “I thought it was the hardest of all trios, you started off wrong, a few little things but the overall performance was great. I give you a lot of credit.”

Judges Comments: Bruno: “I could feel the dirt, I could smell the fear, you were fast and furious, it was one of the most intense and surreal Paso Doble I have ever seen. But because of that though, you lost a bit of shaping at time, you were doing so much with the characterization which I love.” Carrie Ann: “You look stunning tonight. Your beauty just keeps growing and it is wonderful to watch. Tonight it was in full force, you were living the drama, you did lose your balance though and it was a bit too wild and out of control.” Len: “You came out full of attack and full of attention. It did get a little stormy in places, but your commitment and the way you danced in the last few weeks has been amazing.”

Judges Comments: Len: “The thing is with dance, it is about taste. I think the choreography was brilliant, the dancing was brilliant, but a little too hot and spicy for me.” Bruno: “Nasty, naughty, but it felt so good. It was like watching Basic Instinct with a sprinkle of Fatal Attraction and 50 Shades of Paige. If you don’t make it to the finals, I am going to judge in a Speedo next week, you deserve a place in the finals.” Carrie Ann: “That was very sexy, you are just phenomenal, you showed us all your layers; you are powerful, you are athletic, you are erotic, you are sensual, you are sophisticated, you are dynamic. I love watching you dance.”

Judges Comments: Bruno: “You are a magnificent beast, I don’t even think Michelangelo could a better proportioned torso. Your strength tonight was off the charts, your best performance in this competition.” Carrie Ann: “I am at a loss for words, you are not the best dancer in this competition, but when you are here your presence is so determined. You don’t hit the best lines, but you are magical.” Len: “That dance will go down in the DTWS hall of fame for the most spectacular lifts I have ever seen on this show. Absolutely fantastic, you are a beautiful person.”

Judges Comments: Carrie Ann: “You have electric feet, you are my hero tonight.I am so happy, I love when somebody makes a come back like that.” Len: “If natural dance talent was in the dictionary, it would be a photo of you. Truly, I so hope you are in the final because you bring joy to me and the whole ballroom.” Bruno: “Everything that show business should be, so well performed, great job.”

Judges Comments: Len: “I don’t think people appreciate the problems you have to go through to be on DWTS. You never cease to amaze me, well done.” Bruno: “You would have to be blind folded not to fall head over heels in love with that performance. I was mesmerized by it all, the performance of the night.” Carrie Ann: “You reminded us to always push our boundaries, I love your fearlessness, it inspires me to the deepest core of my being.”

Judges Comments: Bruno: “This was a double whammy, it was superb. Tonight was sensational, you put so much into it. In fact, everyone deserves to be in the final.” Carrie Ann: “It was elegant, it was all going so well and then there was a catch in the dress, I have to call it – there was a little bit of a boo boo.” Len: “You see what you see. There is no I in Team, there is an I in Ginger and there is an I in fantastic.”