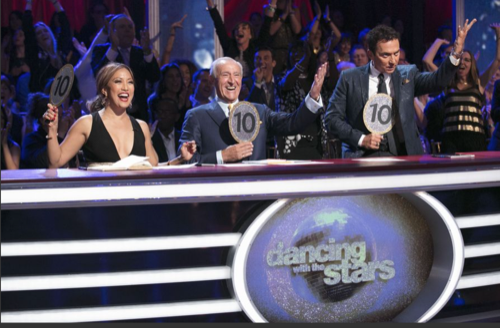 Tonight on ABC Dancing With The Stars 2016 airs with an all new Monday May 9, season 22 episode 8 and we have your weekly recap below. On tonight’s episode, the remaining six couples will take the competition to the next level as “Judges Team Up Challenge” comes to “Dancing with the Stars.”

On the last episode, the remaining eight celebrities danced to popular music from favorite musical icons, as “Icons Night” came to “Dancing with the Stars,” live. The couples danced to music from such icons as Beyoncé, James Brown, Whitney Houston and Stevie Wonder. Did you watch the last episode? If you missed it, we have a full and detailed recap right here for you.

On tonight’s episode as per the ABC synopsis, “the remaining six couples will take the competition to the next level as “Judges Team Up Challenge” comes to “Dancing with the Stars,” Each of the judges – Len Goodman, Carrie Ann Inaba and Bruno Tonioli – will coach two couples, as well as choose their songs, dance styles and overall creative. Then, for the first time this season, the stars in each team will have to step away from their pros and dance by themselves for a portion of their routine.”

Show Time! Nyle DiMarco & Peta Murgatroyd are told that they are safe this week!

Nyle DiMarco & Peta Murgatroyd coached by Bruno Tonioli and dancing the Paso Doble to “Victorious” by Panic! At The Disco [VIDEO HERE]

Judges Comments: Len: “I thought it need more and on occasion you didn’t get your weight over your feet. However, I have to day you come out every time with purpose, Nyle you are amazing.” Bruno: “I thought that was mind blowing, you had a special power. The silent sequence was like watching five men dancing to a beating heart connected to a soul. This was a dancing with the stars classic that nobody will forget.” Carrie Ann: “That was amazing that was so fierce and then you went into silent mode, 22 seasons and nothing has touched me like that. It was so profound, just to know you do that every week. You guys are brilliant.”

It time for more results, the next couple who is safe is Paige VanZant & Mark Ballas. The first couple in jeopardy is Jodie Sweetin & Keo Motsepe, along with Antonio Brown & Sharna Burgess.

Judges Comments: Bruno: “So good to see my Antonio back, dashing, loving and romantic. You paid a lot of attention to the detail, you really applied yourself, you can do it.” Carrie Ann: “You are the last football player dancing tonight, his is a dancer in the house. This was elegant expression of your soul. It was true dancing, I could tell the difference from this week to last week. I am so proud, that was amazing, thank you for taking the note.” Len: “You lost your hold and your posture but you never lost your will to win. You worked on his footwork a lot, I tell you that is more yes than no Antonio”.

Judges Comments: Carrie Ann: “Keo is never holding you back, he is the bomb. That was incredible, your star is shining bright, it is your best dance ever.” Len: “Let me be honest, I found you were nervous and unsure of yourself for weeks Now you have grown and you have flown, you made me feel so happy, it was brilliant.” Bruno: “Rejoice, hallelujah! All I could see was goodness, you were really inspired Keo. You should be proud of yourself, it was one of the most euphoric jives.”

Judges Comments: Len: “In hold, you had your head a little too far to the left. However, you are a terrific dancer.” Bruno: “It was chilling and thrilling, you really push the boundaries all the time. You interrupted the movements and took a big risk, it was incredibly difficult and you did an amazing job.” Carrie Ann: “That was amazing, i was so amazed with the concept, it was the most emotional and multi teared performance from you, I really appreciate it. Tonight you gave us nine thousand quality of movement and I really appreciate it.”

More results: The next couple who is safe is Ginger Zee & Valentin Chmerkovskiy. Wanyá Morris & Lindsay Arnold are in jeopardy.

Judges Comments: Bruno: “You really got me, I was totally smitten by your performance, seriously. The dynamics of partner work was outstanding. You worked magic.” Carrie Ann: “That was mind blowing, what is incredible is you were dancing as one, the hold was insane, the shaping, everything, the energy through your body, you were one body.” Len: “You were on the same wave length, I loved the fast, slow, big, small, hard, soft, fire, ice, that was a hell of a dance.”

Judges Comments: Carrie Ann: “It was a rough ride, it was more than the bandanna. There were a few out of steps you moved so naturally though even with the mistakes,. If you are here next week,m you need to push yourself harder, you need to be on the edge. Tonight there were a lot of mistakes.” Len: “It is the quarterfinals shootout and you came out all guns blazing. What I loved about you, you have that natural rythym and quirky moves. There was a loss of timing at one point, but it was great number.” Bruno: “What I like is the fact that you were kicking and jumping like a rodeo. It was so enjoyable, I think when you over energize, you go faster than the speed of light and that was the problem”

Judges Comments: Len: “I love the concept, I love Bruno’s bravery in getting the two couples to switch. I thought it was incredible the way Nyle and Jodi danced together, lots of content, I thought i was terrific, I congratulate you.” Carrie Ann: “Bruno, always taking risks. That was not an easy dance, it was really engaging to watch, dancing girl on girl and guy on guy, what impressed me most is you were in sync, a super sexy version of the Rockets.”

Judges Comments: Carrie Ann: “You are the Caribbean king, everybody. That was so much and you brought out the secret weapon, but you didn’t need him. Wanya, I hope those slips in your last dance don’t prohibit you to get to the next round because you were great.” Bruno: “You are king of the jungle, welcome Len. That was so delicious, Ginger once you get your hips going, you can’t stop that girl, she is full of sex appeal and Wanya, you can Samba.”

Judges Comments: Bruno: “Fantastic concept, I loved the physicality of it all. It had purpose, it was emotionally driven, I loved every second of it.” Len: “Great imagination, full of purpose and emotion. I loved the start, carry on Carrie Ann, you are terrific.”

The couple leaving the competition is Jodie Sweetin & Keo Motsepe.