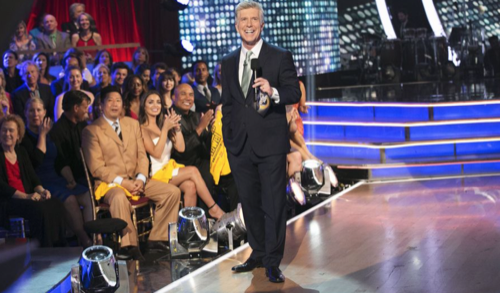 Tonight on ABC Dancing With The Stars 2016 airs with an all new Monday May 23, season 22 episode 10 and we have your weekly recap below. On tonight’s episode, the finalists compete during the 10th week of performances, which feature two rounds of dances: a redemption dance and a freestyle dance.

On the last episode, the five remaining couples advanced to the semi-finals as the competition heated up, on “Dancing with the Stars.” Each couple danced two dances – one being a style the couple had not danced to yet, and the second being a Trio Dance, in which each celebrity couple danced with a third dancer. Did you watch the last episode? If you missed it, we have a full and detailed recap right here for you.

On tonight’s episode as per the ABC synopsis, “after weeks of stunning competitive dancing, the final three couples advance to the finals of “Dancing with the Stars.” It’s the closest race ever with some of the best dancing celebrities have ever pulled off. Ginger Zee and Valentin Chmerkovskiy, Nyle DiMarco and Peta Murgatroyd, and Paige VanZant and Mark Ballas have one last night of competitive dancing, vying to win the judges’ and America’s votes to be crowned the “Dancing with the Stars” champion, culminating an incredible season, which will be announced live on Tuesday.”

Judges Comments: Len: “The improvement from week three when you did this dance is amazing, far more fluidity through the movements, Val the lifts, I loved them because they complimented the routine, they were organic, I just loved them.” Bruno: “It was like watching Ginger and Val greatest hits remastered and remixed in contemporary style. Great tactic because it really showed how she blossomed, much better.” Carrie Ann: “What I appreciate most is the strategy, doing a medley of your best is smart. The core strength tonight was great, there was power I haven’t see before and I loved it.”

Judges Comments: Bruno: “It was like an exhilarating ride on the pony express, such a difficult routine, I loved the line dance. You lost a little bit of precision though in one corner, but it was fabulous.” Carrie Ann: “That was such a great dance for you, you had great form. Bruno was right thought, you had one slip.” Len: “It was a little hectic in places which made you lose a little control, but you are one heck of a dancer.”

Judges Comments: Carrie Ann: “You are like meteor shower raining down upon us. A lot of people don’t improve and I love that you brought even more than an A game, you brought an A+.” Len: “People think I am grumpy, I don’t have a nasty bone in my body. This is the final, I want to get it right. The choreography was fantastic, although I didn’t feel there was enough hip action in the salsa from Paige.” Bruno: “There is one thing that is amazing, you have learned how to use all that energy to the maximum effect, your footwork out danced Mark. “

Judges Comments: Len: “Ginger, tonight you have shown your versatility, you’ve come out with this second dance and it was fun, pain is temporary, glory lasts a lifetime.” Bruno: “I absolutely adored this number, you really brought back to life the legacy of Fred Astaire and Ginger Rogers. It had the really classic Hollywood movie musical look. All the little details, all the styling, you really did it and I adored it.” Carrie Ann: “This is where I think you shine your brightest, in hold, this shows popularity is because of this type of dancing. You are classy, elegant, sophisticated, mature, ripe and beautiful.”

Judges Comments: Bruno: “That was beyond dancing, that was a work of art. It was perfection at every level, I have chills, I really have, it was stunning.” Carrie Ann: “I have to say in 22 seasons, that is the best dance that I have ever seen. I see man that wants to prove that he can dance and a man that wants to change the world through dance.” Len: “That was a dance for everyone, you are a very special person and that was a very special dance.”

Judges Comments: Carrie Ann: “This was incredible, everyone is crying. What is incredible about you is that you have grown in this beautiful way and you have showed us how dance feels.” Len: “It has been an honor to see three fantastic Freestyles, good luck tomorrow.” Bruno: “That was really a triumph, you brought me to tears.”