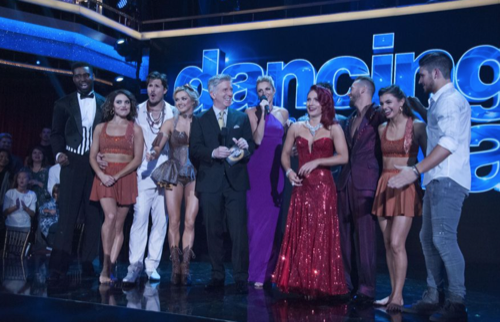 Tonight on ABC Dancing With The Stars 2015 airs with an all-new Tuesday, October 4, 2016, season 22 episode 4A and we have your weekly DWTS recap below. On tonight’s episode, it’s another results show of the season DNCE Performs Their New Single, “Body Moves,” and the Third & Forth Elimination of the Season Will Take Place.

On tonight’s episode as per the ABC synopsis, “DNCE will perform “DNCE will perform their new single, “Body Moves,” and there will be an all-male dance number in which the male pros of “Dancing with the Stars” perform to the song “Ain’t No Sunshine.” In addition, Derek Hough will choreograph and dance to a special number. Never-before-seen footage, backstage conversations, additional judges’ reactions and a recap of the amazing performances from the first ever Cirque du Soleil night will also be shown. At the end of the night a double elimination will occur, based on combined viewer and judges’ scores from October 3.”

Make sure to bookmark this space and come back between 8 PM – 9PM ET for our Dancing With The Stars recap. In the meantime, while you wait for our recap check out all our DWTS recaps, news, spoilers & more, right here!

Tonight’s results episode of Dancing With The Stars kicks off with hosts Tom Bergeron and Erin Andrews – they introduce our first performance of the night, DNCE sings their hot new single “Body Moves.”

After the commercial break – pros Sasha Farber and Emma Slater perform a romantic duet for the audience.  And, they share a sweet kiss at the end.  Then, Sasha does the unthinkable and he gets down on one knee and proposes to Emma.  She’s totally shocked, and says “Yes.”  Of course, the cast rushes out on the floor to congratulate them.  And, Bruno Tonioli even sheds a few tears of joy.

It’s time to get back to more Dancing With The Stars results – we take a look back at Maks and Amber Rose, Allison and Babyface Edmonds, and Artem and Maureen McCormick’s Cirque Du Soleil performances last night.  Amber and Maureen did well – but Babyface has a disastrous night and is at the bottom of the leaderboard.  Tom Bergeron announces that Amber Rose is SAFE, Maureen McCormick is also SAFE, Babyface Edmonds and Allison Holker are officially the first couple eliminated tonight.

After Babyface’s exit, pro Derek Hough takes the stage for an amazing solo performance – he shows of his dance moves, his tap dancing, and apparently he can play the drums too!

Now, it’s time to get back to more results.  Laurie Hernandez and Val, Terra Jole and Sasha, and James Henchcliffe and Sharna join the DWTS hosts on the stage.  Laurie and Terra are both SAFE tonight.  But, in a shocking twist, James Henchcliffe and Sharna Burgess are in jeopardy of being eliminated tonight, they are currently #2 on the leaderboard.

Babyface Edmonds was the first dancer sent home tonight, not its time to learn who will be joining him on tonight’s double elimination.  Now, its time for the moment of truth – James Henchcliffe and Jana Kramer are safe, barely.  Vanilla Ice and Witney Carson are officially eliminated from Dancing With The Stars.