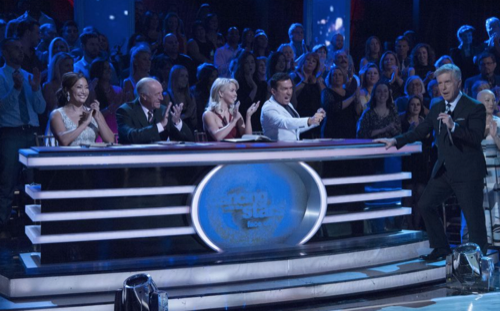 Tonight on ABC Dancing With The Stars 2015 airs with an all-new Tuesday, September 27, 2016, season 22 episode 3A and we have your weekly DWTS recap below. On tonight’s episode, it’s another results show of the season and the second elimination will take place. Florida Georgia Line, CMA Award winners for Vocal Duo of the Year, will perform.

On tonight’s episode as per the ABC synopsis, “Viewers will also have a chance to see the couples’ dances from the previous night one more time. The show will be packed with never-before-seen footage, including extended training packages, exclusive interviews with the couples and judges, and a glimpse of what’s to come on week four of “Dancing with the Stars.” At the end of the night, the second elimination of the season, based on combined viewer and judges’ scores from September 26, will take place.”

Make sure to bookmark this space and come back between 8 PM – 10PM ET for our Dancing With The Stars recap. In the meantime, while you wait for our recap check out all our DWTS recaps, news, spoilers & more, right here!

Tonight’s results episode of Dancing With the Stars kicks off with hosts Tom Bergeron and Kym Johnson. After last night’s dance offs, 6 couples were given eliminated. Tom reveals that since last night was a rushed show due to the debates, tonight we will get to hear some of the judges’ feedbacks for their performances.

First we take a look back at Babyface and Allison’s Jive. They heated up the dance floor with a performance of Little Richard’s classic song “Great God A Mighty.” Len Goodman dishes on the dance, “They captured the fun and the freedom of the jive, it just needed to be a little bit sharper.” Babyface and Allison faced off against Jana Kramer and Gleb. Len sounds off on Jana’s dance, they were two great performances. Babyface full of fun and rhythm, but Jana full of sharp kicks and everything I like to see.” Jana Kramer and Gleb won the dance off and immunity, Babyface is in danger of going home.

Rick Perry and Emma Slater performed a Paso Doble for the DWTS judges last night. And they faced off against Rick’s behind the scenes bestie Vanilla Ice. Len Goodman jokes that he admired Rick’s determination, “He came back and gave it his all.” Vanilla Ice and Witney Carson’s Paso Doble was a bit darker and more dramatic than Rick’s. Len Goodman shares his thoughts on Vanilla’s performance, “For me Vanilla won the tie-breaker because it was a much more full-on, passionate Paso Doble.” Vanilla and Witney won immunity, Rick Perry and his partner Emma are in danger of being eliminated tonight.

Up next is a review of James Hinchcliffe and Sharna’s performance last night. They danced the Cha-Cha in a dance off against Ryan Lochte and Cheryl Burke. James and Sharna nailed their dance and received 29/40. Ryan Lochte and Cheryl gave it their all, but they fell short. Bruno Tonioli dished, “Ryan my darling, you have to do more. It looked like she was dancing around a lamppost. You’re big and tall, do more!” James and Sharna win immunity, Ryan and Cheryl are up for elimination tonight.

Terra Jole and her partner Sasha Farber had an emotional performance last night, and the DWTS judges loved it. Julianne raves, “The Viennese Waltz requires extremely long lines and for Terra that could be challenging, but she stretched so far and her frame was so beautiful, it was one of her best dances.” Terra and Sasha faced off against Calvin Johnson and his partner Lindsay. After the scores were tallied up, Calvin and Lindsay won immunity and Terra and Sasha are in danger of being sent home.

Last night Amber Rose and Maks Chmerkovskiy performed the Salsa to Jennifer Lopez’s song “Big Booty.” The judges weren’t too impressed. Julianne dishes, “Amber really came out and gave it her all and she was smiling and we got in to it, but it wasn’t the proper dance that we were looking for.” Amber and Maks danced against Maureen and Artem. The judges were pretty hard on Maureen and Artem too, but they won immunity and Amber and Maks are in danger of being sent home.

The final dance off of last night was Laurie Hernandez and Val VS. Marilu Henner and Derek Hough. Laurie and Val scored a 34/40. Carrie Ann Inaba explains that they would have gotten higher scores, but they did a lift and there are no lifts in a Tango. Marilu and Derek gave it their all, but they weren’t able to beat Laurie and Val’s scores, they are eligible for elimination.

Now, It’s time for some results. The couples that are elibigle for elimination line up on the stage. Tom Bergeron reveals that Marilu Henner and Derek Hough are safe – but Amber Rose and Maks are in jeopardy of being eliminated [still]. Before we get to any more results, there is a special live performance by the bad Florida Georgia Line.

Up next is another musical performance by Fitz an the Tatrums, and there is a special treat for DWTS fans – brothers Val and Maks Chmerkovskiy take the stage and perform TOGETHER!

Tom Bergeron takes to the stage to reveal some more of the results for tonight, according to the judges’ scores and America’s votes – Babyface and Allison are safe tonight, Rick and Emm will be joining Amber and Maks in jeopardy. Next they reveal that Ryan Lochte and Cheryl Burke are safe – but Terra and Sasha are in jeopardy.

It’s time for the moment of truth tonight on Dancing With the Stars. Rick Perry, Amber Rose, and Terra Jole are all in danger of being eliminated. Terra and Amber are safe. Rick Perry and Emma Slater are officially eliminated.