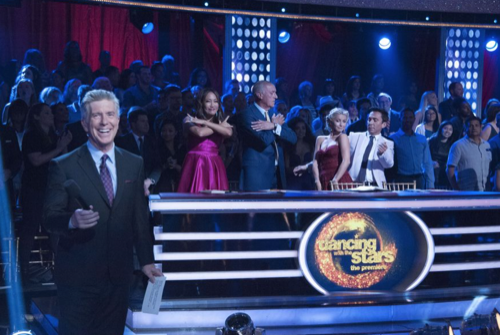 Did you watch last week’s DWTS season 23 premiere episode where we got to meet the 13 celebs competing this season?  If you missed the episode we have a full and detailed Dancing With The Stars recap, right here!

On tonight’s DWTS episode as per the ABC synopsis, “The 13 celebrities get ready to dance to some of their favorite TV theme songs as TV Night comes to “Dancing with the Stars. The First Couple Elimination of the Season Will Be Announced at the end of the show.”

Make sure to bookmark this spot and come back from 8PM – 10PM ET for our live coverage of the Dancing With The Stars Season 23 premiere.  While you wait for our recap make sure to head over and check out all our DWTS recap, spoilers, news & videos, right here! In the meantime hit up our comments section and tell us  if you have any favorites going into the premiere!

Tonight’s episode opens up with a review of last week and a review of the men who stormed the stage to protest Ryan Lochte.  Tonight is TV night!

Judges Comments: Len: “Well you know what I like you captured the flavor of the TV show.  The technique was better!  Well Done!”  Julianne: “I second that from last week to this week you are so much better.  Work on the body contact.  Such an improvement!”  Bruno: “Oh my Darling it all worked well deliciously well pitched and 1970s feel.  Very nice, much better!”  Carrie Ann: “There looked like there was one thing but your confidence was so much better.  There was one moment when you almost made a mistake but well done!”

Judges Comments: Julianne: “I wanna say you are a very good dancer, you are naturally gifted.  You have the most gorgeous legs I have ever seen.  Make sure to extend your leg!”  Bruno: “I don’t why after I watch you dance I want to go to confession.  I loved the passion, I love your drive.  I love what you put in your performance.  You missed a complete of passes.  Use the back of the leg, extend from the back.”  Carrie Ann: “This is when you realize that dancing is a sport.  You were able of doing pretty lines. What I love is the effort and passion.”

Judges Comments: Bruno: “I have to say one thing for sure your performances are very catchy.  I have to give you credit for enthusiasm.  Your footwork is like heavy equipment!”  Carrie Ann: “I thought that was so much fun, I smiled the whole time.  Well done!”  Len: “You were having fun on the farm and it was not a total failure.  You need more polish, but well done!”

Judges Comments: Carrie Ann: “That was a big Erkel.  You are so darn cute, your enthusiasm is contagious.  Your hold was very good I was very impressed!” Len: “The Detroit Lion has come out with a roar.  Watching you dance gives me joy.  Well done!”  Julianne: “Part of this competition is what you give the audience.  It ended too soon.  You are so cool and easy.  You are one of those people who will improve each week.”

Judges Comments: Len: “I thought it was full of imagination.  I would have loved to see you in a ballrooom hold.  Maks you know!”  Julianne: “From last week to this week you definitely took what we said.  The one thing I want to ask how long have you been dancing in those shoes, you looked a little clunky.”  Bruno: “I could see the effort. I could see you took everything we said.  You have to respond to Maks, you made a step in the right direction.  You are going the right way but you have to keep working.”

Judges Comments: Carrie Ann: “It was a better than last week.  You were ahead of the music, I want you to slow down.  You are trying to force too much.”  Len: “What Carrie Ann said was the truth.  But, I cannot give a better score because you lost timing.  You have to calm down and stay on the beat.”  Julianne: “Work on locking in together.  Focus on to each other and that will help you with the timing.”

Judges Comments: Bruno: “It was very very effective you played the character well.  You have to be careful the way you throw away your hands, you have to make it more lyrical.”  Carrie Ann: “This week was more revealing.  Stop lip synching we want to see you dancing.  Your hands are really big, you have to find a happy medium.  You have moves.” Len: “Improvement in the movement.  Much more content, you had the great package of fun and technique.  Well done!”

Judges Comments: Len: “Diamonds come in small packages and you sparkled tonight.  Well done!”  Julianne: “That performance was made for you. That was my favorite dance of the night!”  Bruno: “My darling we are all under your spell.  That was the most complete quickstep of the evening. Great connection.  Outstanding!”

Judges Comments: Julianne: “You are an unexpected surprise, there is a mystery about you.  I just feel you are going to have one of the most fasinating journeys.”  Bruno: “It was interiguing with just the right moment of sensuality.  I am sure there is so much more for us to see.  There was such tension you never knew who was leading!”  Carrie Ann: “I know you are shy but you were killing it.  We all felt the sex appeal, you understand the music.  It was yummy!”

Judges Comments: Len: “I thought it was full of snap crackle and pop and another high score.”  Julianne: “First of all I want to say you were amazing. You are Disney’s Beyonce!  Unbelievable.”  Bruno: “You are a leading lady you upstaged Val.  Power and incredible level of performance.  Well done my darling!”

Judges Comments: Carrie Ann: “Impressive, your synchronicity was on point.  This week was not as good as last week, but I am impressed!”  Len: “James I have to say you are an accomplished dancer.  I thought the Paso got mixed up in the production.”  Julianne: “Okay I have to say I so appreciate your commitment.  Your facial expression, you should go into acting after this.  You are sharp you hit the movements, but your shaping is a little lacking!”

Judges Comments: Bruno: “Sunshine cabs are running beautiful.  Look at you lovely lines, so graceful.”  Carrie Ann: “What was so nice about this week we got to see how beautiful you dance.  You have so much expression!  Well Done!”  Len: “The dance was a rolls royce.  I thought it was smashing.  Derek you did a great job with choreography!”

Judges Comments: Julianne: “The concept was amazing but I do have to say I saw so many mistakes. Once thing I would say if you are here next week work on the frame.”  Bruno: “It was great you embraced the character but you have the posture of fozzy bear.  You have to maintain the frame.  Keep the positive energy!”  Carrie Ann: “For all you went through I appreciate the joy your brought.  There was a lot of problems but it was fun.”

That is it for the evening. Tomorrow night is the first elimination of the season make sure to join us!